Fighting Ethnocentrism by Going to Europe: Travel as a Political Act with Rick Steves 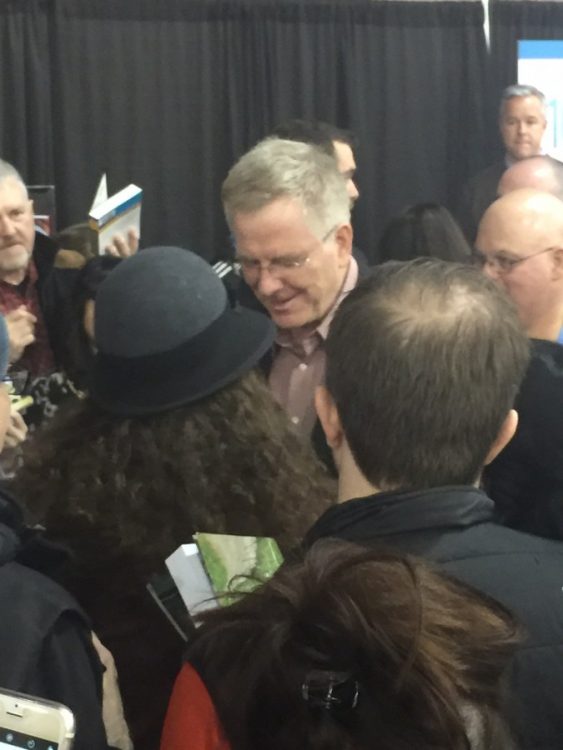 The name Rick Steves has become synonymous with savvy, frugal, no-nonsense travel. He’s established a veritable European travel empire, including dozens of guidebooks, tours, apps, travel products and even the beloved PBS series, complete with its own theme song. But in the case of Rick Steves, “empire” isn’t really the right word, not with his emphasis on meaningful cultural exchange and the publication of his award-winning manifesto, Travel as a Political Act. In a recent presentation at the Philadelphia Adventure & Travel Show, Steves doled out travel tips and witty quips to a packed house but more importantly laid out his vision for how travel can help us navigate the more unfortunate aspects of Western imperialism.

According Steves, travel “humbles our ethnocentrism” and allows us to “meet people who find different truths to be self-evident and God-given.”

He also maintains that it is “safer to travel now than it has ever been.” The proliferation of cable news channels has resulted in what Steves refers to as “news entertainment” in which networks “amp it up, sex it up, and bloody it up” to drive ratings, leaving a terrified populace in their wake.

“What do people say when you tell them you’re traveling?” he asks the audience, who are vying for seats in the Philadelphia Convention Center.

“Have a safe trip!” we echo in unison.

Steves explains that this– the “have a safe trip,” the ominous “stay safe,” or the well-meaning “we’ll pray for you”– is a relatively new phenomenon (“We used to say ‘bon voyage’”) due in no small part to the fear mongering of our elected officials and news media.

Statistics suggest that you are much more likely to be killed by a homicide in your own neighborhood than by a so-called terrorist somewhere else in the world. With his characteristic humor, Steves tells the audience, “If you care about your loved ones, you’ll take them to Europe tomorrow!”

Of course getting to Europe is only half the battle. Getting around once you arrive can present more of a challenge.

For independent travelers, Steves recommends mass transit. It’s green, it’s inexpensive and it will allow you to rub elbows (quite literally in some cases) with the locals.

For those who prefer a bit of assistance along the way, Steves recommends bus tours, either his (which limit their 50 person tour buses to 25 people) or someone else’s. “Take the bus,” he suggests, to get from Point A to Point B, but do your own thing during the day. This will allow you to skip out on the interminable shopping tours that invariably end with a kickback for your driver. In addition, he advises travelers to pay a little more upfront to avoid shelling out for hefty tips and additional unexpected expenses at the end of their trip.

Steves reminds the audience that there are only two types of travelers in Europe: those who packed light and those who wish they had. Personally, he never checks a bag and passengers on his company’s bus tours are limited to a carry-on measuring 9” x 22” x 14” (“tough love” he calls it).

In defense of his company’s policies, Steve maintains that his website is, in fact, “designed to deter high maintenance travelers.” Instead, Steves welcomes curious, hearty, go-with-the-flow types, who can carry their own bags and won’t freak out if they have to walk a few blocks to reach their accommodations, especially as many of the best hotels lie with newly established “traffic-free” zones in many cities.

Furthermore, Steves tells first-timers, “If you are alive, you are young enough to youth hostel.” Travelers should not be put off by the name and many so-called “youth” hostels now offer private rooms with en suite bathrooms for those beyond the bunk-bed years of life.

The following statement may seem like blasphemy coming from the lips of the European travel guru but Steves wryly maintains that “museums can ruin a good vacation.” This is due to their crowded galleries, long wait times and the every-present specter of “museum fatigue.”

When arriving in a new city, Steves always starts at the Tourism Information office. He advises travelers to purchase city passes when available (for example, the Paris Museum Pass pays for itself in 3 visits and lets you skip the lines at the city’s most popular destinations), to book local guided tours (many of which are often free, especially in northern Europe and the UK), and to not be afraid to splurge on hiring an expensive but highly valuable tour guide. When he took his own family to Cuba, for example, he hired a guide for 4 days at a rate of $100/day or $25 per person. This greatly enhanced his family’s experience and allowed them to make the most of their time on the island.

In addition, he recommends his book, Europe 101: History and Art for the Traveler, which is “designed for smart people who slept through their history of art classes before they knew they were going to be in Europe.”

His new app also allows listeners to get “lost in the wonder of Europe” (rather than spending their entire trip nose-in-guidebook). It contains 40 audio tours and 300 tracks of travel tips, all of which can be accessed offline.