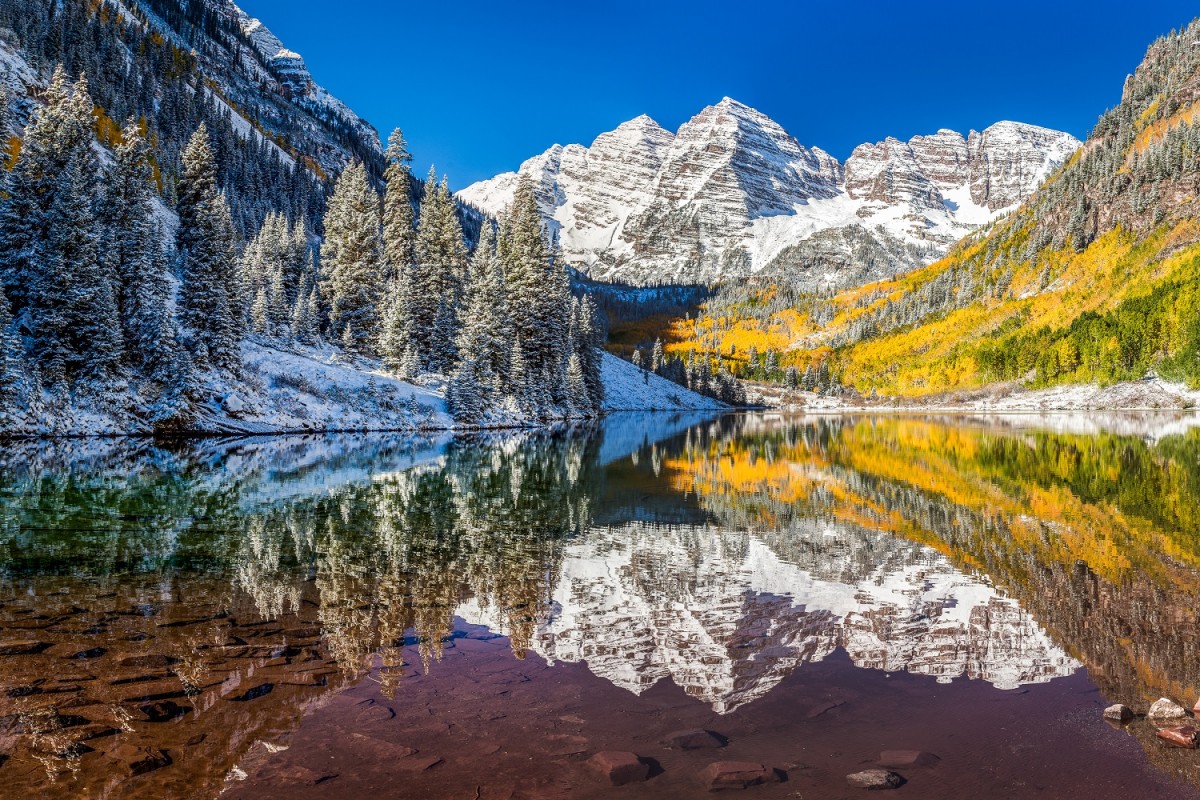 Although technically it is still summer, and most of the country remains in heatwave mode, gradually temperatures will drop, and the vibrant colors of fall will grace America’s treasured National Parks and open spaces.

Autumn is less than a month away and for photography buffs, some of the most colorful scenery of the year is about to get underway.

Leaf peeping is the term coined for traveling to fall foliage in areas where leaves change colors in autumn. The name is synonymous with the stellar colors of New England; from mid-September through early November, gorgeous vistas from Oregon to Georgia; Maine to California become ablaze with splashes of gold, orange, yellow and red.

From Mid-September to the beginning of November; smoldering leaf peeping photo ops abound from Oregon to Georgia; Maine to California, and throughout the U.S. a sea of gold, orange, yellow and red graces our nation.

Lobsters, lighthouses, and charming coastal villages steal the show on Maine’s center stage. A trip on Old Route 1 takes you along Maine’s jagged shoreline and through picturesque towns of Brunswick, Rockport, Bath, and Camden. You can even visit the L.L. Bean flagship store in Freeport.

Due to its northernmost location, dramatic fall colors set it in early September. The best time to see fall’s brightest color is generally in mid-October.The explosion of autumn hues lasts until the beginning of November.

The best vantage point to photograph Maine foliage is Acadia National Park. While Acadia is a land for all seasons, visitors who arrive in September and October encounter a fall feast for the eyes in the park’s forests. Acadia park is also the home to the first sunset in the continental United States which rises over Cadillac Mountain.

Fall visitors to Arkansas can capture the changing of the season in a kaleidoscope of colors. The state features an actual fall foliage meter that tracks the progress of light and contrast in vibrant earth tones.

Photographers arrive in the two greatest intensity peaks runs of October 14-20 and then later around October 26 -November 5.

Home to mountains, springs, rivers, and breathtaking parks, there is so much to see and even more to photograph!

New Yorkers have been awe-struck by the nearly 6,000 square miles and the multitude of splashy colors in the Catskill Mountains. For photography aficionados, there is no shortage of mind-blowing views in the Catskills.

To access superb scenery venture off to the northern peaks to capture the mountains dazzling fall foliage from an elevated perspective.

The fall season is also a time of festive gatherings in the Catskills. Once you’ve completed your quest to capture leafy snapshots and majestic peaks, you’ll want to grab your lederhosen and head over the Hunter Mountain Oktoberfest. This festival spans over four weekends and offers live entertainment, great food, and authentic German fun!

The Woodstock capital is home to Autumn craft fairs and farmers’ markets where you can purchase crops from local farmers in historic villages.

One of the most picturesque parks in America is Wyoming’s Grand Teton National Park. For photographers seeking vivid, eye-popping color palates, Grand Teton will inspire you to shoot away.

It’s the multitude of photo ops that makes Grand Teton rare and exclusive. Glittering alpine lakes, lofty mountain ranges, and rare encounters with exotic wildlife. Flora and Fauna come to life in the fall, so toy certainly not run out of striking images to photograph.

Mormon Row and the Moulton Barns are the most photographed destinations in the park, but the Grand Tetons’ celestial peaks are visible from all angles make the park an impeccable destination for outdoor adventurers and nature-loving photographers.

From early September to mid-November an eruption of autumn undertones rains down on Oregon’s Columbia River Gorge.

From big leaf maples to stately oaks, the colors change by regions within the massive gorge.

Beating the rainy season does have its advantages. After the summer months, the crowds die down, and the Gorge, home to countless trails and hikes while drenched in fall colors.

With over 50 waterfalls, including Oregon’s grand dame of Multnomah Falls photographers get snap happy shooting pics of Oregon’s most noted outdoor playground.

There are waterfalls, rivers, lakes, streams, basalt cliffs, endless fields of wildflowers and the chiseled work of nature, the Columbia River.

The best time for fall photos is in the early morning or the late afternoon when you will find the most bright lighting.

Many travels prefer to visit Maryland in the fall season for its change of colors. Temperatures in October is still pleasant, and fall colors are usually lasting into November.

The iconic waters of the Delmarva Peninsula and the Chesapeake Bay encompasses Maryland’s Eastern Shore. Home to seafood feasts of succulent Maryland Blue Crab; known for its memorizing burnt orange sunsets, nature walks, and a historical journey back in time to the genesis of America.

Many travels arrive in the fall season for its change of colors. Temperatures in October is are still pleasant and the prime month on the Eastern Shore, with the colors usually lasting into November.

For nature photography visit the wild Chesapeake at Blackwater National Wildlife Refuge for a rare opportunity to shoot Eagles, and a wide variety of native bird specifies in three distinct wetland ecosystems.

Stellar photo ops include a visit to the historic harbor of St. Michael and a trip Assateague Island to photograph its wild horses.

Perhaps no other U.S. city embraces its Mexican heritage as Taos. The artist colony of Taos comes filled with photo ops of its Southwest motif. Taos Plaza is the cities historic district, lined with art galleries, specialty shops and serves as a live music venue.

The best time to visit is in early to mid-October when hues of fall bring a burst of color into the high desert.

The church of San Francisco is one of the most photographed sights in Taos. For optimal lighting, shoot the church from the front in the morning and the back in the late afternoon.

The time-skipping surrounding area best explored by driving the Enchanted Circle takes you through resort area of Angel Fire, Eagle Nest, and Red River. The nearly three-hour scenic is a greatest hits of New Mexico’s exclusive desert and mountainous terrain.

Astonishing scenery and miles of hiking trails make Amicola Falls State Park in Georgia one of the most popular state parks in America. Amicalola, derived from the Cherokee word for “tumbling waters,” and home to Georgia’s highest waterfall.

Towering at 720 feet and visible from various vantage points, Amicalola Falls is the tallest flowing waterfall in the Southeast. The falls come to life when the season’s change and autumn foliage and subdued lighting create for picture-perfect vistas.

The best fall footage is the moderate hike on the Amicalola Falls Loop where the scenery is in a constant state of change; when photographers can view the mammoth falls from a wide range of angles and fluctuations in lighting.

Most visitors to Cape Cod come for its long summer days and beach vacations in the historic seashore town.

After Labor Day, as the crowds disperse, the charming coastal town returns to its quaint off-season roots. Beaches allow free parking; tee times at the Cape’s stellar golf courses become readily available; summer crops abound at farmer’s markets; reservations at Cape eateries are not a problem in the fall.

Photographers marvel at the over 100 well-maintained walking trails where fall colors are in full bloom, and cranberry bogs, flocks of birds, salt marshes, kettle ponds allow for breathtaking photos. Art festivals and pumpkin season round out Autumn in Cape Cod.

For over 100 years, fabled Aspen has been a year-round playground for nature lovers, skiers, and hikers alike. The posh ski resort town of Aspen attracts visitors year-round.

Fall is when colors come to life in the Rocky Mountain retreat. Aspen remains filled with warm days.  A visit to Aspen in late September and early October is when fall foliage is at its best.

Photographers who arrive during the fall season flock to Maroon Bells to see one of the most photographed landscapes in Colorado. The color palette of the Rockies with “screensaver-like” backdrops. The changing of the leaves to yellow against the crisp blue sky creates timeless photos.

Located along the shores of the Wisconsin River is the eye-catching etched glacier gorge known as the Wisconsin Dells. Also known as  “The water park capital of the World.”

The eye-popping beauty first captured in 1875 by Wisconsin Dells nature photographer H.H. Bennett put the area on the map and paved the way for photographers to shoot its unique exposed sandstone gorge.

Today the H.H. Bennett Studio is part of the Wisconsin historical society and Bennett’s impressive collection of early photos including the first ever stop-action photo. Bennett’s studio is now a museum open to the public.

As summer turns to fall, so do the colors of the Dell. Gorgeous photos occur at the Cambrian Overlook and the Wisconsin River State Natural Area.

If you’re in sunny California experiencing record-breaking heat waves throughout the state, you probably think that there is no Fall foliage on the horizon.

Along the eastern Sierra Nevada Mountains, the weather gets cooler as summer turns to fall. Located east of Yosemite, Mono Lake famous for its limestone spirals. The rock band Pink Floyd used the arid setting and peculiar rock formations known as Tufa Towers for its album cover ‘Wish You Were Here.’