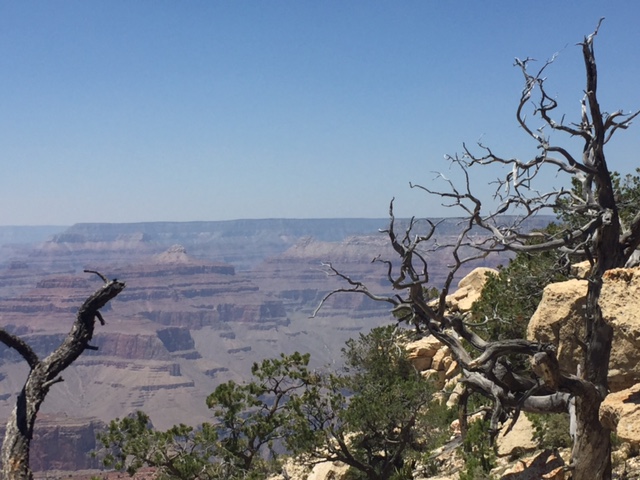 Williams, Arizona bills itself as the “the gateway to the Grand Canyon,” and for good reason: here, just as would be sightseers have for decades, you can board the Grand Canyon Railway and ride to the canyon’s South Rim. But before we go any further, let’s clear up a few things about the Grand Canyon: it’s a canyon or, in others words, a great big hole in the ground. Like all holes, there are multiple vantage points from which to view the canyon, and it’s virtually impossible to go through the hole to get from one to the other. (That’s not to say it hasn’t been done: the record stands at just under 3 hours for running from one rim to the other, and helicopters allow the mere mortals among us to approximate this same journey without the requisite cardiovascular stamina).

Most visitors, some 90%, never go beyond the canyon’s popular a South Rim. It’s the most well known, the most easily accessible, and offers some of the greatest views, but for these reasons it is also the most crowded so if you’re looking for tranquility and the ability to commune with nature one on one, keep looking.

The lesser known and lesser visited North Rim attracts far fewer visitors and is only accessible– you guessed it– from the north. Entry isn’t possible in the winter due to road closures but in spring and fall (and of course the summer tourist season as well), the North Rim offers a charming alternative to its southern counterpart.

Driving from the North Rim to the South is possible, but remember: we’re talking about a canyon here so you have to drive around it and not through it; as such, the journey will take you about 6 hours, which is why most folks skip the North Rim all together and head straight for the South instead.

One additional alternative, for visitors coming from Las Vegas in particular, is the Skywalk. Built by the Hualapai Native American tribe, the horseshoe-shaped cantalieveired glass bridge comprises the cornerstone of a larger development project, the aptly named Grand Canyon West. It’s expensive, with most packages starting at $80 a pop, and you’re not allowed to take photos so shutterbugs beware.

The South Rim, for its part, is easily accessible by car and countless tour busses but the most hassle free way to get there is to park in Williams and ride the historic Grand Canyon Railway. These tickets aren’t cheap either, but a variety of classes cater to most budgets, from the basic package (which starts at $79 round trip), to the more expensive Luxury Dome (which will run you $89 per person one way); the latter affords better views and comes with a complimentary glass of champagne, plus snacks available throughout the journey. 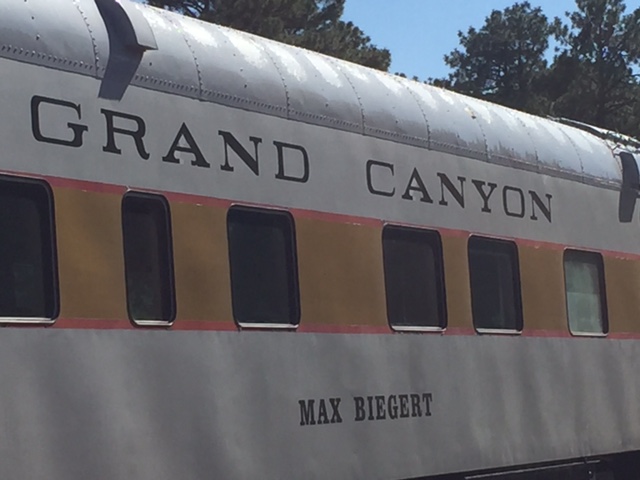 My husband and I bought the cheap seats for the way in and given how many seat-kicking toddlers’ parents had done the same, we were happy to have splurged on the luxury dome for the way back (plush seats and no kids). For all it’s kitchiness and flag-waving patriotism, I’ve got to hand it to the Grand Canyon Railyway: they’ve gotten the art of canyon visit orientation down to an art, with maps awaiting you on your seat when you arrive and a guide in each train car to give you the low down on what to see and how to see it when you get to the rim. The guides mix it up with a relentless arsenal of cow jokes (What do you call a cow with no legs? Ground beef) plus a few musicians and cowboys along the way to keep things interesting.

Upon approaching the South Rim, our guide shared a few startling statistics: an average of 17 people die at the Grand Canyon each year, either from dehydration while hiking or from simply falling into the canyon. “It’s not kid proof,” she warned us, “and it’s not adult proof either.” The death toll doubled in 2015, which, if you know your millennial history, was the same year that selfie sticks came out, so again: shutterbugs beware. 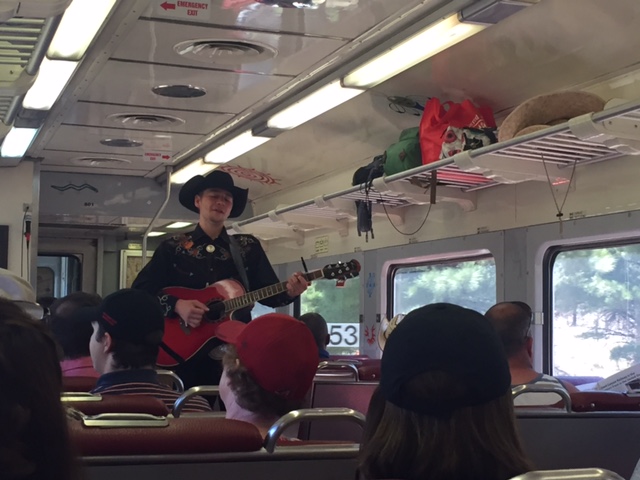 Trains leave Williams at either 9:30am, with an additional 10:30am service added if the numbers warrant it. Most return trips depart the South Rim Train Depot at 3:30, but we booked the later 4:30 train to give ourselves a bit more time to hike and explore the historic Hopi House (an artisans workshop turned gallery and gift shop built in 1905) and the historic El Tovar lodge (complete with mounted moose– and other– heads in the lobby, given to the lodge by famed conservationist and Grand Canyon lover Teddy Roosevelt). Also worth checking out are the Bright Angel Lodge and Kolb Studio, built by the legendary Kolb brothers who ran the canyon’s first souvenir photography business, but if you’re visiting over July 4th weekend, when the only thing worse than the heat is the crowds, your best bet is to hit the trail as soon as you arrive (we picked the Rim Trail and the first mile or so of the Bright Angel trail, which leads to the historic Phantom Ranch at the bottom of the canyon) and to cap off your visit to the South Rim with a glass of lemonade (or something even a little stronger…) at the El Tovar Cocktail Lounge before boarding the train back to Williams.