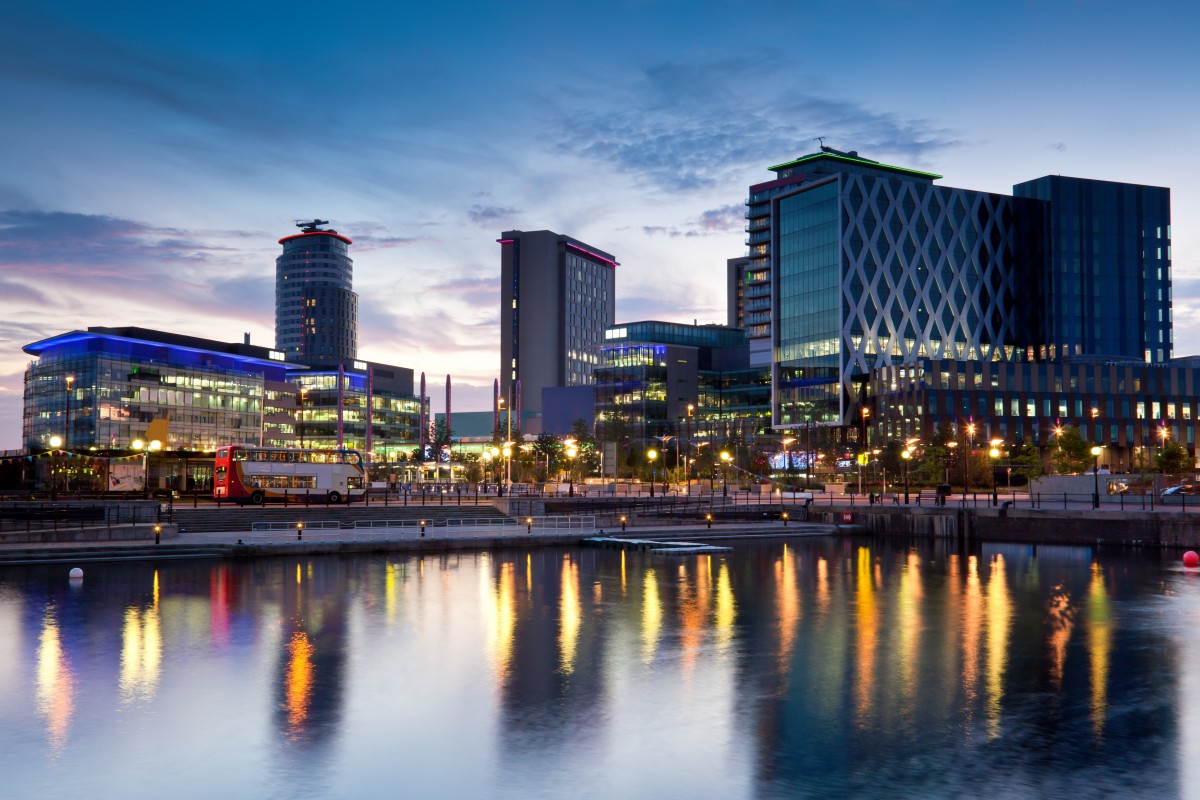 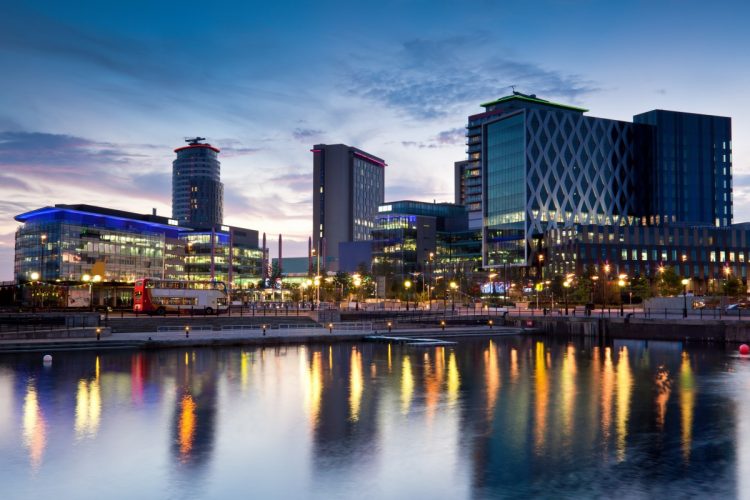 A city of swagger and spirit, heritage and hedonism, fashion and football, Manchester warrants its billing as England’s ‘capital of the north’. Best known for its industrial past and a near-peerless musical and sporting legacy, it has been transformed in recent decades and is now defined by creative talent, fresh ideas and an international outlook. 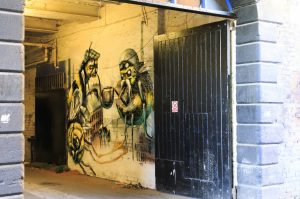 Many of the vast, low-rise factories and storehouses, that define its urban landscape, have been converted into compelling arts spaces. As the creative arts scene is proving, recent investment has helped reinvigorate Manchester’s city centre into a trendy area filled with vibrant restaurants and music venues.

The underground club scene is as vibrant as it has ever been and, musically, there’s a huge diversity of interesting work – from the internationally renowned techno label Modern Love or Manc grime MC Bugzy Malone to Liz Preston’s gorgeous looped-cello folk.

The same is true in other fields, like the headline-grabbing arts theatre developments of HOME and the Whitworth Art Gallery where several small, artist-run galleries and studio-event spaces are giving the arts scene new life.

Then there’s the city’s railway arches which house an extraordinary concentration of innovative restaurants where a hardcore group of indies continue to defy the odds and serve incredible food. 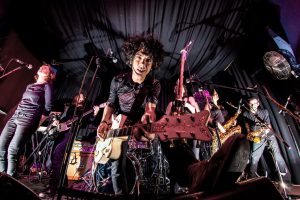 What makes Manchester truly fun is the swirl of hedonism that lets you dine and dance yourself into happy oblivion.

The once alternative Northern Quarter is increasingly besieged by hen do’s and identikit bars, but Soup Kitchen (www.soup-kitchen.co.uk) remains defiantly left-field. Upstairs you might find anyone from electro-punk’s Trash-O-Rama to Manchester techno outliers Space Afrika DJ’ing into the small hours. Downstairs, in the grimy basement where speakers hang from chains, there’s anything from the latest psych weirdos to alt pop star Jessy Lanza. Outside of the dancehall and grime party scene, expect a rolling programme of the sharpest names in house and techno.

Purpose-built clubs seem so sterile, whereas on the outskirts you can find raw spaces like Antwerp Mansion, a gloriously ramshackle Victorian villa in Rusholme and Mantra in Ancoats www.antwerpmansion.com, www.mantramcr.co.uk.

Then there’s Hidden, a rough-edged, industrial space in an off-grid location. It attracts a self-selecting group of dedicated clubbers to nights that might include a showcase by sprawling Manc bass collective, Levelz, or slots from Berlin-based techno titans like Levon Vincent. www.hidden.club

Night & Day Café may look like a 1990s cafe but after dark it turns into one of the few city-centre venues still pushing new local bands. It’s a stalwart indie venue that has served as a live stronghold for a hatful of great bands over the past 25 years. www.nightnday.org

On the city centre border with Salford, is the Islington Mill which is an important complex of creative studios and gallery space. It’s the mothership of Salford’s burgeoning grassroots arts ecology and a late-night-into-next-day rave space, where things get seriously strange, both on- and off-stage. One week, you can see intense experimental hip-hop like Dälek and the next hazy dub techno. www.islingtonmill.com 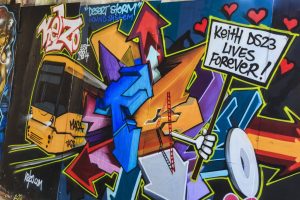 Open Saturdays-only are two consistently fascinating spaces – PS Mirabel Studios and Paper, a minuscule commercial gallery that focuses on all things paper. PS Mirabel is an artist-run studio/exhibition space whose themed shows, inspired by anything from concrete to the industrial north, are witty and warped with good fun. www.mirabelstudios.co.uk, www.paper-gallery.co.uk.

Like ad hoc art space at the Penthouse or the creative wellness centre of Wonder Inn, 3MT is the best of the Northern Quarter – a DIY, independent 70-seat theatre and hothouse for new drama, poetry and comedy. www.thepenthousenq.com, www.wonderinn.co.uk, www.threeminutetheatre.co.uk. 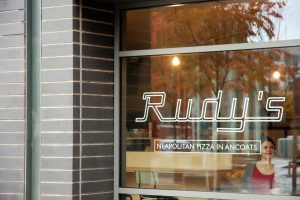 Rudy’s is a pizzeria where the dough is proved for 24 hours, dressed with fine ingredients and blast-baked for 60 seconds in an imported clay oven. A process which produces ethereally light bases, blistered with char. Expect to queue at peak times. www.rudyspizza.co.uk

Calm, precise and executed with feeling is how you’d describe Yuzu’s Japanese food and the cool bebop jazz soundtrack that accompanies it. The flavours are as intense as they are fresh in Yuzu’s sashimi, tempura and noodle bowls and its legendary ‘kara-age’ fried chicken. The sashimi’s beautifully prepared but it’s the quality of the cooked 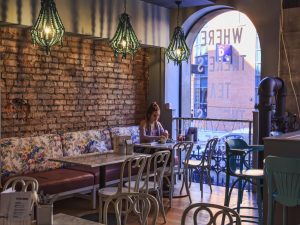 Leaf on Bold Street is a unique and independent tea shop housed in a striking art deco building. Their menu is fresh and local and the entertainment distinctive, with an acoustic stage downstairs; upstairs there’s a live gig venue. Try their American style pancakes with Maple syrup, Greek yogurt and blueberry compote. Wash it down with a lose-leaf Peach and Goji Berry Oolong. www.thisisleaf.co.uk/manchester

Bright, friendly and super-basic, Siam Smiles is a Thai supermarket cafe which serves arguably, the best Thai food in Manchester. Go steady with the homemade chilli dipping sauces – they take no prisoners. This is some of the best Thai you’ll have eaten outside of Thailand. @SiamSmilesCafe 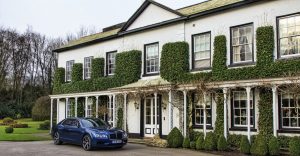 Escape Manchester city and take a half hour drive through the beautiful Cheshire countryside to the county’s elegant Grand Dame – Statham Lodge – a rural boutique hotel, contained within 11 acres of landscaped gardens, on the outskirts of Lymm.

The approach is along a sweeping carriage drive, which delivers you to an 18th century country house that’s been sympathetically restored and extended by its owners, combining the refinement of the 18th century and the convenience of the 21st

Privately owned since the 60s, this Georgian Grade II listed manor house was once a casino for the Manchester gambling set. As the gaming laws changed the hotel gradually evolved into an elegant 37-roomed hotel, with links to its former life.

“Upstairs we have a beautiful Georgian room which is still called the Roulette room as a nod to all the games of roulette that were played up there,” says proprietor, Georgina Walker. “It is now very popular as a bridal changing room.” (They won best wedding venue in Cheshire in 2016).

Speaking of the hotel’s history, Georgina retells the tale of a centuries old myth that has, in recent years, been solved.

“A tiny suit appeared in a charity shop in Somerset which had stitched into the lining a label linking it to ‘James Wilson, Statham Lodge, Cheshire, 1918, aged 61, The Little Squire’. There’s an area upstairs in the Lodge’s attic which has tiny doors with low door handles – local rumour has it that a dwarf once lived there. So, I bought the tiny three-piece duck-egg blue Georgian suit from the charity shop for £250 and now have it framed and displayed above the bar. It’s a bit of a talking piece.” By coincidence the bar at Statham Lodge is called Squires Bar. The top floor remains true to the time with scaled-down doors and their low handles.

Afternoon tea of warm scones, strawberry jam and clotted cream is a treat, followed by a picture-perfect rose garden and nature walk. Be sure to book your afternoon tea in advance. www.stathamlodge.com

There’s always something going on in Manchester, whether an international festival, a Premiership football match or a high-profile musician performing in one of the city’s many venues. The buzz of the place is contagious, with new restaurants opening every week, serving everything from cicchetti to sushi.

One of the best things about Manchester is its diversity. Ultra-modern buildings share Manchester’s skyline with imposing neo-Gothic structures such as the Town Hall; one-off boutiques compete for shoppers with high-street stores; and the multicultural population means there’s a Chinatown, a Curry Mile and the truly alternative scene.

Locals, both native-born and imported, are convinced they live in the greatest city in the world. Once you’ve experienced it for yourself, I think you may agree. 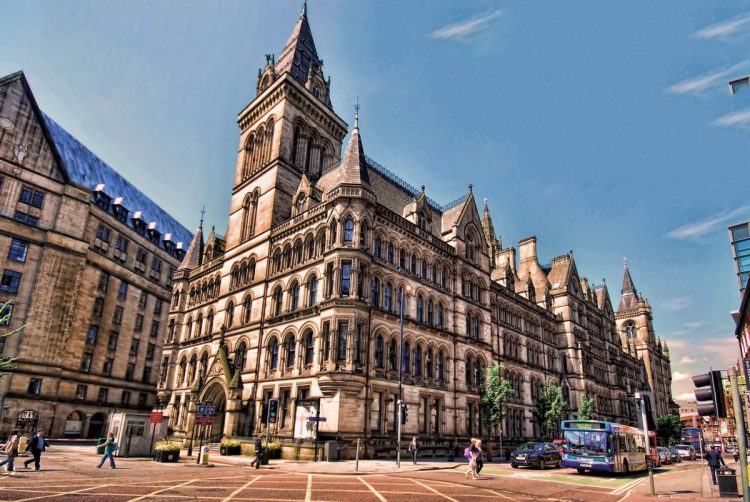