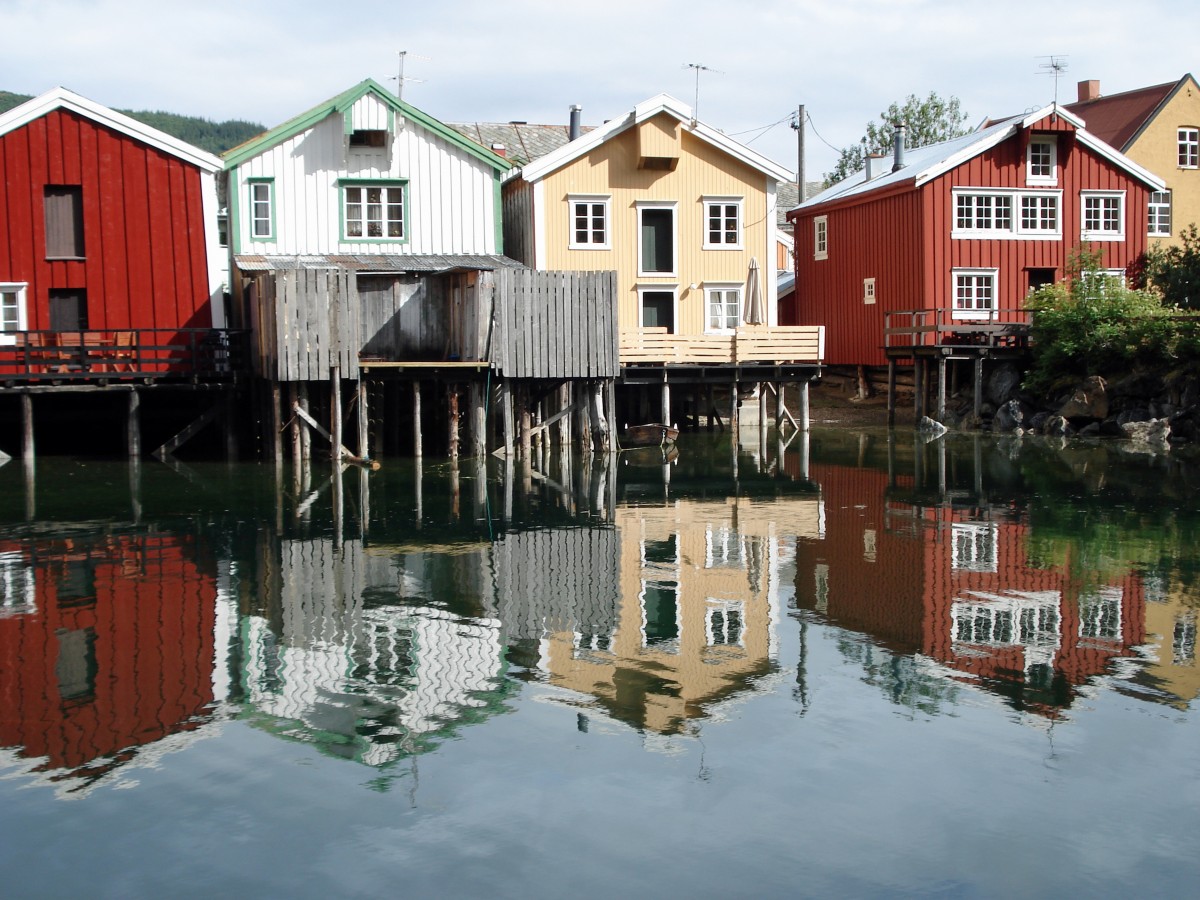 There’s a quiet culinary uprising catching on in Norway; a new-found pride and a change in attitude towards food traditions. This has given rise to the production of local and organic produce which people in the know claim is the result of their climatic conditions and landscape. To find out what makes fjord food so distinctive, I sought the advice from food producers, chefs, artisan bakers and farmers.

Following a brief ferry trip from Bodo to the island of Kjerringoy, I noted cattle and sheep wandering around on the beaches – some eating what looked to be kelp anchored in amongst the rocks, others just lounging on the wet sand. I caught a glimpse of a feeding trough on the wet sand of the beach and thought of the terrific life the Norwegian farmers provide for their animals.

The purpose of this island excursion was to meet cheesemaker Oddbjorn Ollsen from Markens Grode. He won a national ‘Cheese of the Year’ award for his Red Kjerringoy. This was presented with homemade bread which included flax, sunflower, pumpkin and sesame seeds, then plated with a spoon of green olive humus, an ice cold, honey-sweet beer (brewed on site) and cured slices of spiced moose. Then, I was introduced to his cheese cellar. Imagine the aroma of the strongest cheese you’ve ever experienced. Now triple that intensity!

Says Ollsen: “The clean and cold Norwegian landscape provides the perfect platform for producing high quality milk from goats and cows, which is why Norway’s cheeses are so exceptional. In recent years, our cheesemongers have created a greater variety of cheeses – everything from camembert, blue cheese, chevre and brie to traditional products like as brunost, gamalost and pultost. Today, you can find more than 150 small-scale cheese makers, spread from southern Norway to Finnmark in the north. We’re eager to experiment with techniques, spices and ripening.”

A few days into Norway, I lunched on salmon at Laksforsen Cafe in Trofors, a spacious restaurant with magnificent views over one of Europe’s most beautiful waterfalls. When I asked my waitress, Lotte, after the recipe I was eyed suspiciously and told that she wasn’t sure grandma would want her divulging the family recipe. We stared at one another for a moment, then she added that grandma taught the three generations of ladies working in the kitchen the roots of traditional Norwegian cooking. They all take their food very seriously and before anything is added to the menu, it needs grandma’s approval. I maintained eye contact and she eventually surrendered. Lotte took a long slow look to the left, and another to the right, then leaned in, whispering the family secret into my ear. “The salmon,” she said, “the salmon, she is added to simmering water and poached for ten minutes. This is all.”

At Hotel Fru Haugans in Mosjoen, I experienced a fish soup like no other. I could taste the wilderness in every spoonful – it was like making out with the sea, which soon had me in the kitchen with executive chef Roman Fomitsev (from Estonia) who spoke of the 20+ countries he’s travelled to and cooked in. He claims he’s a bit of a magpie as he collects ideas, ingredients and recipes from each one, adapts it, then puts it in his nest and calls it his own. “My traditional Stock Fish soup though is authentic,” Fomitsev adds with a wink, then slides the handwritten recipe to me across his chrome worktop. “But when you make this you must Skype me in so I can see that you’re doing it right.”

Still to be discovered by the Michelin Guide is the newly opened Restaurant Nyt in Bodo. Here, chefs Bjornar Bakklund and Hakon Lindberg are creating innovative taste sensations with classic Norwegian ingredients. Their focus is local, ‘short-travelled’ food, community farming and rising early to harvest produce. Their inventive and highly nutritious cuisine is created exclusively with locally cultivated ingredients, including heirloom vegetables and herbs with their distinctive flavours and fish they’ve dived themselves. Each course brings with it a brief explanation of origin, growing conditions, harvesting and preparation – and what it delivers is a religious experience. Lindberg is something of a druid in the world of gastronomy as nothing tastes the way one expects. Herbs blended with fruity jus, mild tartness balances crispy textures – an ever present element of surprise. In the kitchen we spoke in between courses about Norway’s extensive coastline and its long rich tradition in seafood, which is how we got talking about of the ‘mad Scotsman.’

Eighty-eight miles north of the Arctic Circle, in the fishing village of Nordskott, is where Scotsman Roddie Sloan lives. He dives deep into the Arctic ocean, targeting exposed reefs, to gather sea urchins which satisfies the fjord-to-table craze at Europe’s finest restaurants. Says Bakklund: “It may not be a traditional catch in Norway but because of the cold, clean ocean, things tend to grow slowly, which means they taste better.”

At Gulburet, a hilltop dairy farm and bakery in Verdal Ostre, I met Tore Ostbo who spoke of Norway’s unique agricultural customs.

“Lambs and goats graze in outlying pastures along the coast and in the mountains – which is a cold and largely unpolluted climate, ideal for growing fruits, berries and vegetables without the need for pesticides. Small holdings and modest farms, like ours, produce milk, cheese and beef in healthy, virtually disease-free environments. Our produce is pure.”

Standing outside his old fashioned country farm shop and butchery, is Svein Berfjord of Berg Gard Farm, in Trondelag, who spoke of Norwegian cured meats. He explained that fenalar is now a geographically protected name for the salted, slightly smoked and slow-cured legs of lamb. Popular too, especially over the festive season, is Pinnekjott – racks of lamb or mutton cured in brine or sea salt.

With Norwegian lambs’ reputation being amongst the best in the world, I asked why he thought this was. Handing me a shot glass of his specialist Aquavit (a schnapps-like spirit infused with herbs and matured in sherry vats – another ancient distilling tradition that’s made a comeback), Berfjord said: “Our meat is especially tender and juicy, due to our animals grazing in outlying pastures, with vast expanses of untouched nature and protein-rich vegetation which consists of an assortment of herbs, as well as clean running water.”

Local producers are seeing increased market-shares in supermarkets, while new, small-scale producers of commodities such as cheese, honey and pastries are popping up all over the country. Not to mention the hundreds of microbreweries and Aquavit distilleries experimenting with different styles and recipes.

At the same time, Norwegian chefs have earned a reputation worldwide, with several wins and podium finishes in the international cooking competition, Bocuse d’Or. In 2016, Maaemo, in Oslo, became the first Norwegian restaurant to get three out of three possible stars in the Michelin guide.

Per-Theodor Torrisen is a former chef who now teaches cooking methods at a Mosjoen culinary school and also imparts his knowledge with tomorrow’s farmers at an agricultural college in everything from growing to conservation, to costing, making, labelling and selling their own produce. He and his students run the annual Arctic Food Festival in Mosjoen and host celebrity chefs from around the world, who in turn do workshops, educating food producers, foodies, culinary students from across Norway and other chefs with their culinary know-how. See Arktisk Mat on Facebook.

There’s a Norwegian food movement which is changing the outlook of young chefs across the country. The modern, healthy agricultural systems that are naturally in place have brought about a gastronomy network across the Nordic regions, manifesting creativity and combinations of flavours and utilising produce into every day home cooking.

I’ve come away from Norway with a slightly altered view of the world, of everything that ends up on my plate, of the food sold in supermarkets – even of autumn.

• Moose: Moose meat is a delicacy and tastes of venison.
• Reindeer: Located in the far north, there are over 250,000 reindeer, tended to by the indigenous Sami people, who herd reindeer whose meat is lean and delicious.
• Deer: In recent years the deer population have outnumbered the moose, so their meat is plentiful and often served as steak, but can also be smoked, dried or cured.
• Grouse: The grouse is the most sought-after bird for hunters in Norway. The breast of young grouse is tender, with a mild gamey taste. The legs and the rest of the bird have a more intense gamey flavour.

• Nordlandsbanen – the railway line that hugs the long west coast of Norway. It starts in Trondheim and takes you through scenic Arctic coastal towns, mountains and fjords to Bodo. It’s the only railway line in the world to cross the Arctic circle. On this journey I travelled from Trondheim, Verdal, Steinkjer, Trofors, Mosjoen, across the Arctic Circle onto Bodo. Luxury train travel through northern Norway, via a diesel locomotive on the Nordlandsbanen, is a scenic journey past farms and fjords and vitas of endless beauty. It’s all made even more pleasurable by the good food from the dining cart – and the craft beers.
• Once a carriage house, Bakkelandet Skydsstation, in Trondheim’s old town, serves traditional food in what feels like grand grandma’s house. Have 60s-inspired Gurli bring you a bowl of her salmon soup (you’ve never tasted anything like it!) then round it off with a blackberry cheesecake.
• For a medieval dining experience, reserve a table in the banqueting hall of Stiklastadir (in Verdal), which is wreathed in legend surrounding King Olaf. Feast on traditional fair of moose meat slow cooked in red wine over a hearth, served with creamed celeriac.
• In Bodo is chocolatier Craig Alibone, who creates exceptional chocolate flavour combinations like Norwegian blue cheese, local stout beer, cherry and horseradish, aerated bacon. He plays around with flavour, texture and design, delivering supreme confectionary. And he ships abroad.
• Do a zodiac boat trip with professional adventure guide, Henry Johnsen, from Bodo harbour to Saltstraumen – the world’s strongest maelstrom where every 6 hours 400-million cubic metres of water pass between the Saltfjord and the Skjerstadfjord at up to 20 knots.

Norwegian Airlines does not fly directly from Canada, however, there are direct services to Oslo and Trondheim from JFK. Flights are operated by a fleet of new Boeing 737-800s with free Wi-Fi connectivity.

The Fru Haugan is a Heritage Hotel set beside the River Vefsna in Mosjoen. It’s northern Norway’s oldest hotel which has been family run since 1885. There are 129 rooms available in both the modern and old buildings (which has been renovated). Be sure to ask for a suite in the old building.