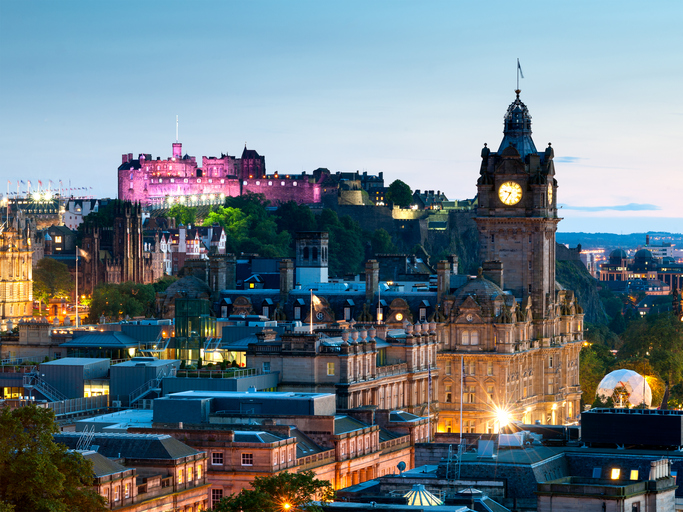 Not only is Edinburgh a UNESCO World Heritage Site, it’s also Scotland’s capital city and home to phenomenal festivals, which have the city buzzing with a sense of excitement all year round.

Packed with medieval tenements, narrow streets through the Old Town and a sweeping elegance which swathes the Georgian New Town, there’s no question that Edinburgh deserves its reputation as one of the most stunning and enthralling cities in the world.

Sightseeing in Edinburgh is pretty easy. You can experience different centuries of history without even moving! Head to the bottom of the famous Royal Mile where you’ll find the 17th century Palace of Holyroodhouse, the modern parliament building and the prehistoric extinct volcano famously known as Arthur’s Seat – all proudly standing next to each other.

Edinburgh Castle
Make this your first port of call. It sits at the top of the historic Royal Mile on a volcanic plug, and

is perhaps the most famous landmark on the Edinburgh skyline. Beat the crowds and get there for opening at 9.30am. The views over the city are spectacular. There is so much to take in at the castle – the National Museum of War, the National War Monument and the Honours of Scotland, the county’s Crown Jewels.

Royal Mile
The Royal Mile is the heart of Scotland’s historic capital. It runs through the centre of Edinburgh’s Old Town, connecting the magnificent Edinburgh Castle with the splendorous Palace of Holyroodhouse. The Mile is overlooked by impressive, towering tenements, between which cobbled closes and narrow stairways interlock to create a secret underground world.

Beneath the City Chambers on the Royal Mile lies Edinburgh’s deepest secret – Mary King’s Close. Back in the 1600’s, Mary King’s Close and neighbouring Closes were Edinburgh’s busiest and most vibrant streets, open to the skies and bustling with traders selling their wares to the Old Town’s residents. Now Mary King’s Close is a warren of narrow underground alleys and spaces shrouded in myths, mysteries and tales of ghosts. Urban legend claims plague victims were quarantined and left to die, then their corpses were used to build the walls.

Grassmarket
Just a short walk away is the eclectic Grassmarket, once a medieval market place and site for public executions. Now the Grassmarket is a vibrant area buzzing with lively drinking spots and eclectic shops. Its detailed medieval architecture, stunning castle views and dynamic atmosphere make it one of the city’s most-loved places. Though Grassmarket executions ceased in the 1700s, some of the traditional pubs in the area still keep the tales of its chequered past alive.

If you’re strapped for time but want to see a lot of the sights, then the one-hour open top hop-on-hop-off City Sightseeing Bus Tour is ideal. Get a birds-eye view from the top deck and explore sights including Edinburgh Castle, Palace of Holyroodhouse and the Royal Yacht Britannia.

Festivals
Edinburgh is famed for being the world’s leading festival city. During festival season it feels as if every shop, bar and available space has become a venue. This summer sees outstanding festivals flood the city with colour and heart-thumping excitement, while the autumn nights are illuminated by the Scottish International Storytelling Festival.

Jazz and Blues Festival (15-24 July)
The 70s saw the birth of Edinburgh’s first Jazz and Blues Festival, which was set up in 1978 by banjo player and guitarist, Mike Hart. The festival initially focused on traditional jazz with a range of free events held in pubs, but by the mid-80s had grown to envelop swing, blues and mainstream jazz.

Royal Edinburgh Festival Tattoo (5-27 August)
Each year the Royal Edinburgh Tattoo bring together thousands of people for this annual celebration of music. It’s very much a ‘global gathering’ as it showcases the talents of musicians and performers from every corner of the globe.

International Festival (5-29 August)
This year’s International Festival will have you see Edinburgh Castle in a whole new light. It’s an epic, outdoor, public artwork which will bring together spectacular animation, lighting and music, delving deep into 350-million years of Edinburgh’s history. Stunning animations will be projected onto the side of Edinburgh Castle, accompanied by a specially compiled soundtrack of music by Scottish rock band Mogwai.

Festival Fringe (5-29 August)
Every Wednesday and Friday throughout the Festival Fringe you get to solve an intriguing puzzle down in the depths of the Edinburgh Dungeons with a Deadly Dungeon Murder Mystery. You’ll be investigating the shocking murder of Judge Mental. Watch out though – you might encounter a few unsavoury characters from Edinburgh’s past along the way.

Mela (27-28 August)
The Edinburgh Mela is a two-day festival celebrating Scotland’s diverse culture through its music, dance and wider arts from around the world all with the express purpose of promoting community cohesion.

But Edinburgh is about far more than its famous attractions or its festivals. There are hidden museums, surprise views, secret gardens, quirky buildings – including a clutch of castles – and some lovely walks. Yes, in the heart of the city.

Even the major museums and galleries can surprise. The Scottish National Portrait Gallery, for example, has a rooftop garden showcasing the country’s rich variety of habitats, from the alpine flowers of its mountains to the grasses of its coastal habitats. The rooftop also has a stunning panoramic view across the city’s spires, domes, towers and turrets.

Tucked down a hidden close off the Royal Mile is the Writers Museum, which any devotee of Rabbie Burns, Sir Walter Scott or Robert Louis Stevenson will want to browse.

Edinburgh has a wealth of green spaces. There’s the huge green sward of Holyrood Park where you can skirt the volcanic heights of Arthur’s Seat on a pleasant stroll to Duddingston village – and lunch at the characterful Sheep Heid Inn – Edinburgh’s oldest-surviving pub.

The point is that Edinburgh does have all the tantalising set pieces: the castle and the palace, grand galleries and gracious streets, designer shops and Michelin stars. But there’s so much more to it.