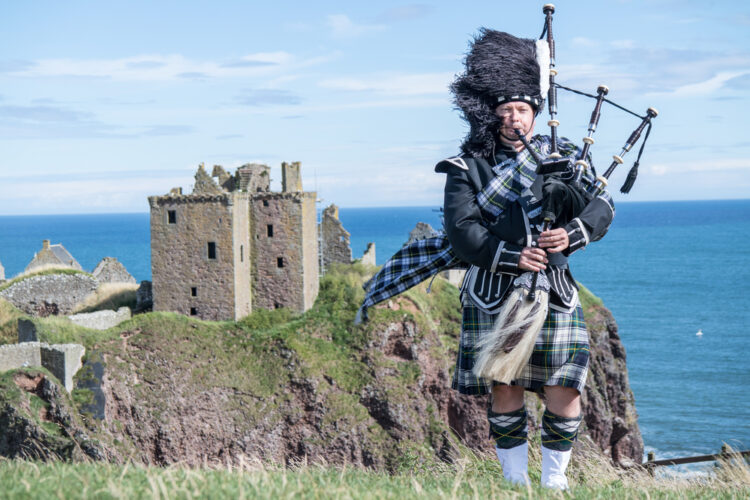 Located in the northeast of Scotland is the port city of Aberdeen, home to over 250 castles and ruins of castles. The epic scenery brings to mind scenes from the silver screen, such as Harry Potter, James Bond 007 films, the Kingsman, and Outlander, to name a few. The hidden forests, green meadows, moors, and castles are a traditional part of Scotland. Aberdeen’s castles vary from the whimsical 16th-century fairytale-looking Crathes Castle to the stately castle of the Earl of Huntly known as Huntly Castle.

It takes about eight hours to drive a distance of 545 miles from London. The best way to experience the rolling fields of green dotted with balls of thick woolly sheep easily visible is by either driving mostly on the M6 motorway or going by train, which takes about seven and a half hours. Flying is just about an hour and a half.

Crathes Castle
Located just 20 miles from Aberdeen, the Scottish town of Banchory is home to
Crathes Castle. From the roadside leading to this rather stately-looking castle, you can only spy a tower in the sky as it is housed on an enclosed compound comprised of 530 acres of green grass meadows. Set to the back of a regal setting, Crathes Castle is reminiscent of the Disney fairytale castle, complete with towers, turrets, and a flag pole. This historical example of a Scottish tower castle was built in the 16th century. Tour guides do an excellent job of showing you around as they relate facts, information, and ghost stories. Visitors can take a piece of history home with them from the castle’s gift shop. There is a picnic area with a kid’s mini-play park next to the River Dee, where fishing is allowed. Don’t forget to visit the topiary hedges in the stately gardens.

Dunnottar Castle
Stonehaven is the location of Dunnottar Castle. Walk toward the rugged cliff coastline where the wind whistles past your ears and hair. Perched on the edge of the cliff overlooking the North Sea, the only way into Dunnottar Castle is through winding stairs that lead to the entrance. Dunnottar endured the siege of Oliver Cromwell, who fought a furious battle for the Scottish crown jewels but was defeated at this location. Dunnottar was the inspiration for the setting of the animated movie “Brave.”

Huntly Castle
Located just outside the town of Huntly, the castle is in ruins but still maintains the main framework of the interior walkways, dungeon, and small chambers where occupants hid from attacks. Once a stately palace, you can still get a sense of what this medieval castle was. Built around 1450 by the Earl of Huntly, it is said to have a ghostly figure known as the White Lady who occupies it. There are guided tours for a minimal price, a gift shop, and adequate parking. 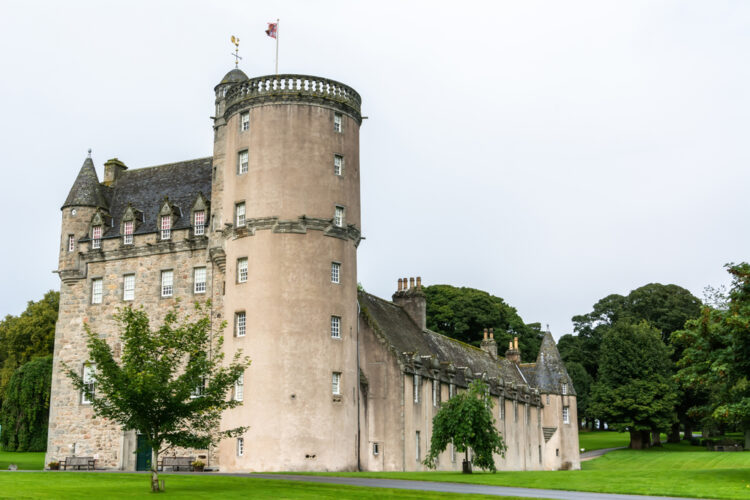 Castle Frase
Located about 16 miles away from the city of Aberdeen on a 140-hectare estate is the majestic Castle Fraser. The castle was built around the 16th century by Michael Fraser, the 6th laird. Visitors pay a minimal fee to self-tour the castle, but with well-informed staff members and information points dotted around the various six floors, you can explore the fully furnished interior rooms at your own pace. The immaculate grounds have an enclosed flower garden and fish pond. Don’t forget to go up to the roof for spectacular views

Balmoral Castle
If Balmoral Castle sounds familiar, it’s the holiday home in Scotland for the Queen and the Royal Family. Prince Albert bought it for Queen Victoria in 1852. It is open to the public during certain times of the year, so do check before making the trip. Visitors can enjoy the grounds, gardens, exhibitions, and coffee shop.  The walking tour is recommended, so you not only see the majestic interior of the Ballroom, with its collection of paintings, sculptures, and the Balmoral Tartan collection, but also the glorious exterior of the Carriage Hall Courtyard and the formal Garden located on three acres of land.

Craigevar Castle
This pink-colored baronial castle resembles a typical fairytale castle with its towers and turrets. Located 20 miles from Inverurie. Built in 1626 by Master William Forbes Danzig Willie, today it is owned by the Scottish Trust and operates small guided tours. There’s a red-haired ghost known as “Red” Sir John, the grandson of Master William, who haunts the castle.