You’d Better Watch Out – Krampus is Coming to Town 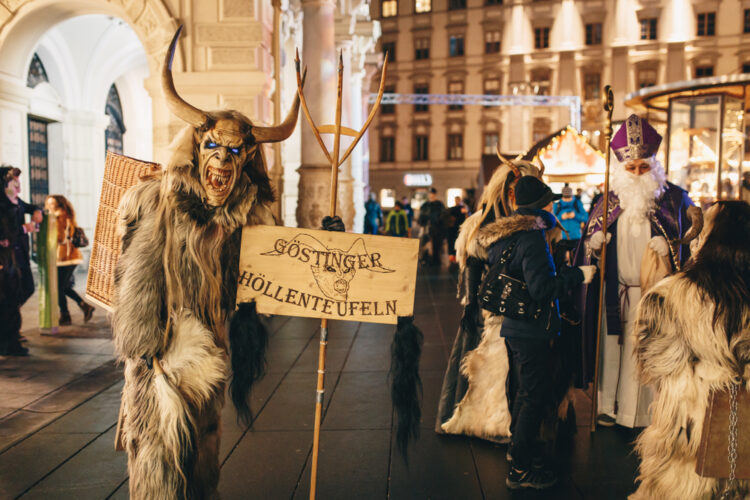 You’d better watch out. Krampus is an iconic creature of Central and Eastern Alpine folklore in Europe. During the Advent season, he is said to visit children who have misbehaved to scare them into changing their ways. Most commonly, Krampus is depicted as a horned figure with a demonic face, long tongue, and cloven hooves. He typically wears fur clothing and carries chains and birch twigs that he uses to punish those who have been naughty.

In addition to being seen as a formidable figure of punishment, some interpretations of the legend view Krampus as having a less sinister side; according to some beliefs, he may accompany St. Nicholas (also known as Santa Claus) on his travels around the world on 5 December. As they go from door to door, St. Nicholas rewards good children with presents such as oranges, dried fruit, walnuts, and chocolate while Krampus gives bad children nothing more than stern warnings meant to encourage better behavior in the future.

Although accounts of the creature’s existence date back centuries in many different parts of the world — including Germany, Austria, Hungary and Slovenia — it wasn’t until late 18th century that Krampus started becoming associated more strongly with Christmas traditions in Europe. In particular, it was during this time period when large winter festivals called “Krampusnacht” began taking place throughout Bavaria and other parts of Germany; these events included parades featuring participants dressed up as both St. Nicholas and Krampus figures respectively. The tradition has since spread across much of Europe over the past two centuries — even making its way across the Atlantic Ocean through North America by immigrants who settled there after World War II — inspiring artwork all along the way depicting what this supernatural creature looks like, how it acts towards misbehaving children and how it plays a role in Christmas festivities worldwide.

Krampus has become an integral part of Christmas celebrations throughout Central European countries like Germany and Austria where his image can be seen adorning everything from cards and decorations to postmarks on holiday mailings each year. He is also featured prominently at various Christmas festivals which take place across Europe every December; for instance at Vienna’s annual “Christkindlmarkt” festival where dozens of people donned as Krampuses march through town terrifying onlookers while playing loud music on drums or bells – something that has become an iconic part of Austrian culture today!

The popularity of Krampus hasn’t just been limited to Europe either; in recent years his reputation has begun growing beyond its traditional stomping grounds thanks largely due in part to international media coverage such films like 2015’s “Krampus” which brought him into mainstream pop-culture with humour-laced depictions of his unique personality traits – something that has helped make him a beloved character among fans all over world!