How to haggle without being a jerk

Dear Travel IQ: I will be going to Turkey soon and I’m looking forward to the opportunity to bargain hunt for a really nice rug.  However, I don’t want to be a jerk when negotiating with the shop owners in the marketplace. What is the best way to haggle without being a jerk? 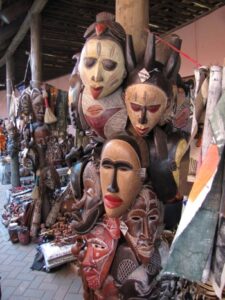 It’s surprising how many travellers can’t come to grips with the art of haggling.

Even though they’re adroitly navigating around a strange country, tasting unfamiliar food and adapting to a foreign language, having to bargain for what you buy is sometimes one culture shock too many.

I’ve seen grown women crumple completely – the sort that would flash their credit cards with glee in any other situation – just because someone asks how much they want to pay.

Others take it to extreme, and there’s always one smartass who boasts about how little he paid and how everyone else was cheated because they’re not as street wise as he is.

It’s almost galling to realise you paid 30% more for exactly the same item, but you’ve done your bit to help humanity. His smug efforts to save $1 on an amazingly beautiful souvenir won’t have any effect on his life at all.

Does he need that $1 more than the street vendor did? Probably not. He may feel self-satisfied with his mastery of haggling, but he might have deprived the seller of a decent income. And that shouldn’t make anybody proud.

If you strike a deal that leaves both sides smiling, it’s a win. Because there’s an art and a social skill to happy haggling that the glib question “how much did you pay?” misses completely. 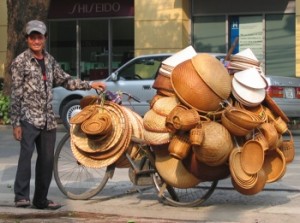 I realised that when I lived in Cairo for four years, and had to haggle every day for everything. Even for fruit and vegetables, which had their prices clearly marked.

I bartered in my faltering Arabic, saying: “Hello Abdul, I need some grapes today.” Abdul would tell me how much they cost, and I’d point to the sign showing they were officially half that price. He’d grin a toothless grin. I’d grin right back. “Oh please, Abdul, not today – I’m in a hurry…”

It was a ritual, a game we played for years, where the locals pitted their wits against the foreigner.

They knew I had more money than they did. Even if I felt poor, I wasn’t the one with my bum on a packing crate, my feet in the gutter and only a few carrots to my name.

I was a foreigner, a source of wealth who could boost their meagre income without even denting mine.

Instead of 50 piastres I’d end up paying 80 piastres, and Abdul bought extra food for his family.

And that’s the key to happy haggling, really. Yes, some people will blatantly try to rip you off in a humourless, unpleasant manner. But it’s a game, not an exam. 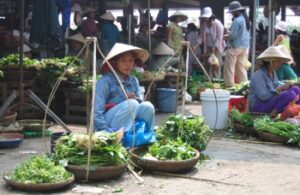 If you refuse to play or go in blindly, you will, of course, be thoroughly conned, and deservedly so. Because bargaining is more than a way of life – it’s a way of interacting with the locals. It’s far more fulfilling than just whipping out your wallet in a wordless transaction that teaches nobody anything about another culture.

If you really don’t want to get involved, learn a few words of a totally alien language. But be warned, the hawkers are far more multi-lingual than you! Saying “No thank you” in Finnish may be exactly what you need to make the hawker go away, but chances are you’ll meet the only merchant in town who’s fluent in Finnish.

Sometimes it’s hard to be polite when a hawker is still dangling trinkets in your face after you’re said no 10 times. In India I saw one charity worker suddenly let rip with two very rude words, sending the hawker scurrying, drawing shocked looks from the crowd, and leaving her humiliated. “That wasn’t very charitable,” she mumbled. 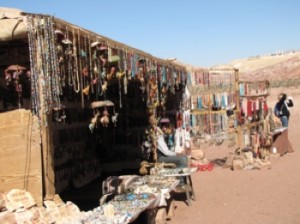 So if you really want to be left alone, it may be worth investing purely to ward off every other tout. In Istanbul the road from my hotel to the city centre was a seething mass of sock sellers. By day two I was fed up with telling everyone I didn’t want fake Nike socks.

On day three I wised up, bought a packet, and carried them proudly as a talisman. “I have socks,” I’d say, waving my pack every time someone approached me with another pair. They laughed, I laughed, and we all went away smiling.

My worst experience was in Marrakesh, where I suddenly craved a small rug for no good reason whatsoever. It always starts the same: “How much you pay? I make you good price. Cheaper than Walmart!” You look, you touch, you’re sucked into the cycle.

We bargained hard, and I felt self-satisfied when I beat them down to a fraction of the starting price.

The deal was done and my rug was whisked away for wrapping. And when I unwrapped it at home a week later, I did a double take. It wasn’t the same rug. This was a thinner, cheaper, tatty fake. I’d bargained them down too much, but they extracted their revenge.

How to leave both sides smiling:

* Do your research. Browse around the formal shops to get an idea of prices. Check the quality too. Fixed price shops may be selling better quality than you’re haggling for on the street, so compare like with like.

* Even formal shops tend to be flexible with the price tag. It’s always worth offering a little less and seeing how they respond.

* Once you know the vague value of an item, decide how much you’re prepared to pay.

* The starting price is hugely variable. Some local guides suggest you offer roughly half of what is initially asked for. I often find bidding just 20% is closer to the mark. If they spit at your feet and brush you away, you’ve gone in too low!

* Walk away at least once. If they come after you, you’re pretty close to striking a deal.

* Don’t haggle for something you don’t want. It’s bad form to agree a price then not actually buy it.

* You may be new to this game, but traders have perfected the art of haggling over the centuries. If they haggle you higher than you intended, pay up and laugh it off. Always remember you’re on holiday – you’re supposed to be having fun!

Besides, it will make a wonderful memory the next time you’re walking around a boring supermarket with those stubbornly inflexible little price tags.

bargaining for goods street markets
Previous ArticleUSVI: Virgin Islands for the Caribbean Virgin
Next Article Who’s Responsible for the Quality of a Trip?
Lesley Stones

10 Ways to Make Coming Home From a Trip More Pleasant

Tips for the solo woman traveler: Keeping safe on the road

How Not to Look Like A Tourist When Traveling in Europe