I’ve never owned a Harley; in fact, I have never owned a motorcycle. So why does the adrenaline flow and the blood pump faster when I see one of these shining speedsters drive by? 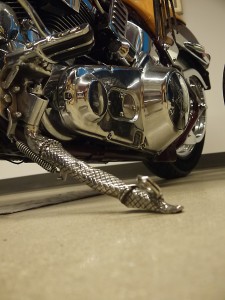 Even I know that there are many great motorcycle brands other than “Hogs’’ riding the highways and byways of the world. Reliable, less expensive perhaps, and with just as much chrome, streamlined power and pizazz as the treasured H-D.

So why does the Harley get all the good press, customer loyalty and movie parts? Sure, there are the distinctive lines and the powerful chest-pounding exhaust, but there’s something about the brand that transcends the mechanics and good looks.  After a tour of this museum, when you’ve rubbed shoulders and shot the breeze with a few of the enthusiasts along for the ride, you realize that, put simply, Harley-Davidson has managed to capture our imaginations.

And speaking of imagination: I must confess that my wife had never thought of me as a Captain America, even in her wildest moments, but our visit to Milwaukee’s Harley-Davidson Museum shone new light in her eyes.

One of the more than 450 Harleys housed in the museum is the World War II-era replica used in the recently released Captain America: The First Avenger movie, starring Chris Evans and Tommy Lee Jones. Harley-Davidson worked with Marvel Studios and Salvaggio Automotive Design to painstakingly recreate five of the bikes used in the movie.

Of course, the one I had eagerly jumped aboard at the entrance to the 130,000-square foot museum was a replica of a replica. The real one the museum has was tucked away in the exhibit hall, along with other memorabilia from the movie set. Still, for me, and the other 1,000 or so visitors taking advantage of the publicity shot that day, there were some bragging rights we could take away from the museum to share on our return home. 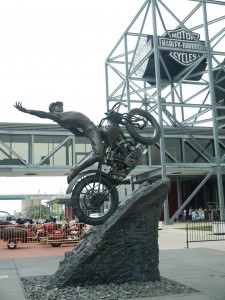 Located on 20 acres of land, the imposing concrete, steel and glass museum was completed in 2008 and was designed to reflect the stark, but powerful image of industrial know-how that built Milwaukee’s history and the Harley-Davidson legend. Edged against Menomonee River, the museum is set in finely landscaped grounds, which creates a surprisingly gentle oasis against the urban backdrop.

If you had any doubts what was housed inside the building, the massive bronze sculpture outside the museum — of a biker racing his machine toward the heavens — offers a powerful clue. Another indication might be the dazzling lineup of visitors’ bikes, almost all Harley-Davidsons, their highly polished chrome creating individual solar flares in the parking lot under the hot Wisconsin sun.

Inside the museum, the parked bikes’ owners get into some serious star-gazing of their own as they look out for their favourite Harley specimens. There’s a chronology to the lineup of many of the bike exhibits: It all begins with Serial Number One, the oldest known Harley-Davidson in existence, and produced by the company founders William S. Harley and Walter and Arthur Davidson in the original 10-by-15-feet Milwaukee shed, where they began operations in 1903. From this birthmark of the business, visitors can travel a journey that will lead them to the latest production models crafted today.

Exhibits also celebrate the popularity of customization by bike owners, such as the “King Kong.’’ A genius creation by Felix Predko, the 13-feet-long motorcycle has two in-line engines and comes with many decorative details, including a miniature King Kong held in chains above its headlight.

Another Hollywood-style machine has glittering rhinestones planted over every square inch of its surface, to which a female motorcycle owner added a daring steel bike rest, shaped like an elegant leg clad in a fishnet stocking.

There are police bikes, U.S. military service motor bikes, complete with serious-looking machine guns, and grocery delivery bikes to entice shoppers with 1920s-style customer service.  The one that especially caught my attention was the 1956 Model KH, which Elvis Presley purchased in 1956, when he was on the cusp of fame and just about to release his number-one hit “Heartbreak Hotel.’’

(The exhibit even has the original purchase agreement signed by the King himself. The $1,143 or so he paid out for his shiny machine must have trimmed his wallet pretty good in those early days.)

It’s estimated that about 350,000 people visit the museum annually. After a three-hour tour of the place, I can see why so many of these folks are repeat customers. Families come in droves — if the Harley-Davidson experience is something to pass along to new generations, then the museum tour is a quintessential rite of passage.

There is a definite sense of camaraderie in the air as you walk through the exhibit halls. Exchanging idle chatter with fellow visitors, you connect with conversions that come with a few surprises. Who would have guessed that the tough-looking bearded guy in the red bandana would turn out to be a Georgetown grad who’d waited until middle-age to find his true footing in life?

The Harley lovers hold many stories worth overhearing; tales of road adventures, flat tires in the desert, dangerous skids on mountain passes and near-collisions with shadowy antelope on midnight prairie highways.

You also pick up the sense of freedom that’s the inherent call of every last one of these machines. And, after three hours inside this museum, even non-riders like me sense the yearning for an endless highway and the golden chance to open the throttle wide, and blaze towards an unknown destination.

My wife says that’s the Captain America in me.

Travel writer Peter Wilson produces a wide range of stories covering both international and domestic destinations. A member of the Society of American Travel Writers, Wilson has a passion for sharing his discoveries with readers though his stories and pictures.