Mystics and Legends of Glastonbury 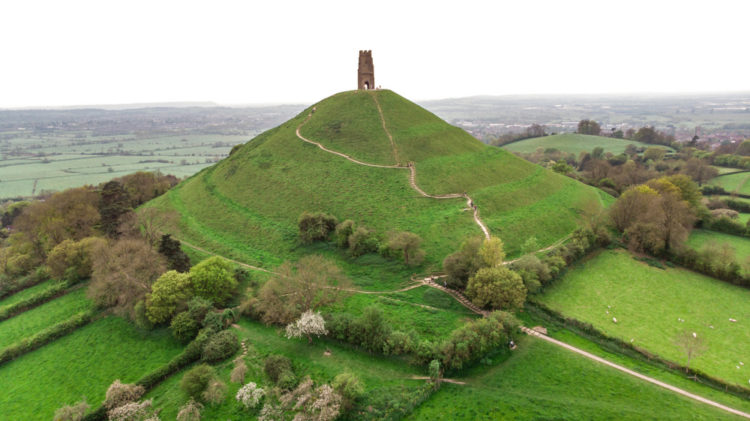 Although the name Glastonbury is synonymous with one of the world’s most famous music festivals, there is more to the tiny Somerset town than the annual gathering of peace and love at nearby Worthy Farm. With a population of approximately 9,000, Glastonbury brims with myths and legends. It’s a meeting point for some of England’s most important “ley lines” – the metaphysical connections which link ancient spiritual sites around the world.

In addition to tourists, the town attracts a hodge-podge of hippies, artists, druids, and pagans. There are fascinating historical sites to explore, and High Street is lined with a bounty of funky cafes to chill in and colorful new-age stores to peruse. I had a feeling that this would be my kind of place and after an incredible weekend at Glastonbury Festival, I made tracks to this captivating town.

About seven miles from town, the metropolis of Glastonbury Festival rises from the fields each year, attracting 200,000 revelers. The festival started back in 1970 when T.Rex was the headliner and tickets were a mere £1.00. These days, such acts as Beyonce and Coldplay take to the stage, and a ticket sets you back £250.00 for the weekend. Despite the hefty price tag and growth of commercialism, the festival has always maintained its commitment to counterculture.

My weekend at Glastonbury was undoubtedly the pinnacle of my year. I spent three days rocking out to everything from an obscure zydeco band to Kylie. I sampled a range of global delights from Pad Thai to veggie tagine, watched the sun set from the stone circle, and danced with Hare Krishnas. I basked in the unique Glasto atmosphere and the weekend came to an end all too soon. Rather than returning directly to the ‘real world’, I decided to ease my way back gently by spending a couple of days discovering Glastonbury’s other side.

You can’t miss Glastonbury’s most well-known landmark as you approach the town. St. Michael’s Tower sits atop the mysterious Glastonbury Tor. At 521 feet high and with 500 steps, it was a challenging hike after the excesses of the weekend but worth it for the sense of tranquillity and panoramic views over the green pastures of Somerset. 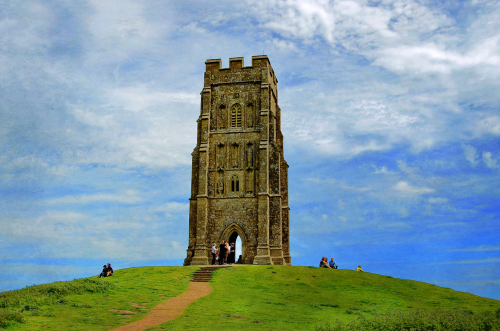 The lonely roofless tower is the sole remaining part of a 14th-century church. The story goes that it is the gateway to Avalon, The Land of the Dead, from the King Arthur legend. Others believe that Jesus Christ visited Glastonbury as a young man and that Joseph returned to the site after the crucifixion to bury the Holy Grail. Evidence of pagan and Christian settlements exist and remains dating back to the Neolithic era have been discovered. The purpose of the seven terraces which encircle the hill remains a mystery but is thought to have spiritual significance. 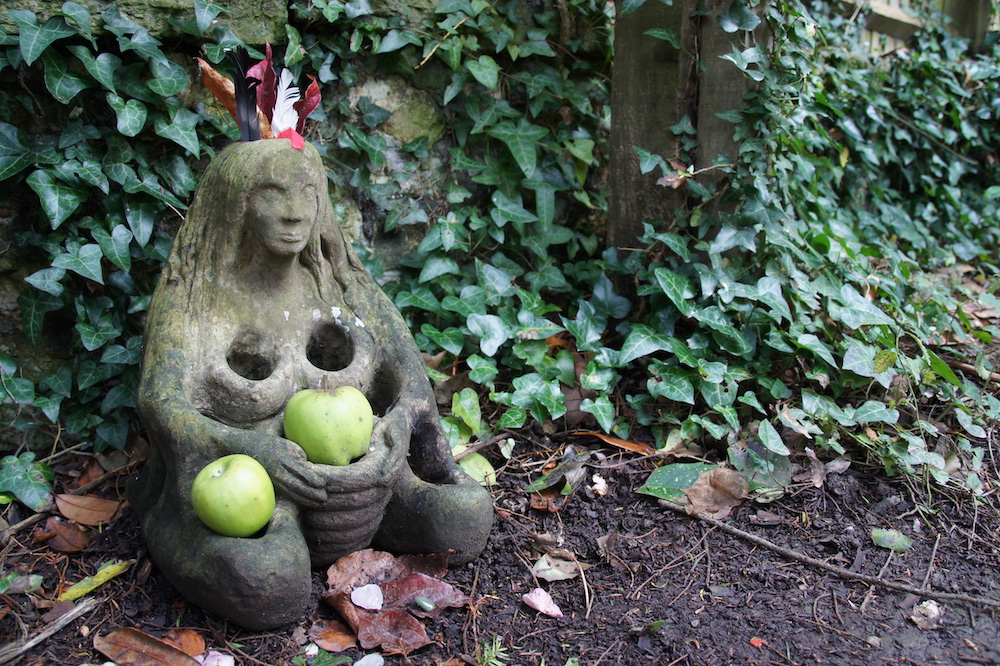 At the foot of the Tor, I paid a visit to The White Spring, which is located in a Victorian stone pump house. Built to collect natural spring water, a ley line runs through the building, and there are shrines dedicated to The Fairy King, Our Lady of Avalon, and the Celtic Fire Goddess. As I approached, I could hear the chants of pagans coming from within. The interior was incredibly atmospheric. It was dark apart from the light that streamed in through the door and the glow of flickering candles that decorated the shrines and adorned the walls. I sat on one of the benches, taking time to soak up the ambiance and listen to the sound of the trickling water. Behind the building, there is a large pool where the spring water collects. Naked bathing is allowed, and the water is believed to have healing properties. 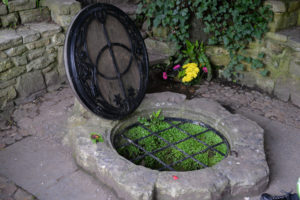 As the White Spring is known for its white deposits of calcite, the nearby Chalice Well is stained a vibrant red from iron oxide deposits. The gardens which surround the well are a peaceful and serene sanctuary with an abundance of paths leading to nooks, crannies, and seating for meditation and reflection. I spent an hour or so in the gardens, and before I left, I refilled my bottle with refreshing water from the spring.

The ruins of the Glastonbury Abbey are steeped in legend, one of them being that King Arthur and his 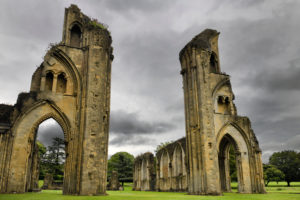 wife, Geneviève, are buried in the grounds. Apparently, the bodies were discovered by monks and a sign marks the supposed burial site. Although a shell of its former self, it wasn’t difficult to imagine how life was back in the day when the building was one of the wealthiest and most prestigious abbeys in the country.

Both Gothic and Romanesque in style, the abbey was originally built in the 7th century. King Henry VIII ordered the dissolution of abbeys throughout England in the 15th century and the abbey was practically destroyed.

The octagonal Abbot’s Kitchen is the only building fully intact and offers a fascinating insight into a medieval England. Surrounded by majestic trees and lush countryside, Glastonbury Abbey is an essential stop for those who grew up on the intriguing legends of King Arthur as I did. There was certainly an element of magic about the enigmatic ancient monastery.

This impressive museum traces the history of life in rural Somerset. Situated below The Tor, the well-presented exhibits tell of work carried out in the home as well as the fields. Contemporary buildings merge seamlessly with a 14th-century barn in which the galleries are housed. On the grounds, there are sculptures and trails to explore. My personal highlight was the horse sculpture in the courtyard, skilfully welded together from scrap metal. At the end of my visit, I enjoyed a cup of tea accompanied by a tasty scone in the courtyard at the Old Barn Café whilst taking in a superb view of Glastonbury Tor.

Chilling out in the many cafes is a popular pastime for both locals and visitors. Hundred Monkeys Cafe serves organic, locally sourced dishes, and I devoured a hearty Full English Breakfast on my first morning in town. Rainbow’s End Café was Glastonbury’s original vegetarian eatery, and you can’t fail to notice its bright green and yellow exterior. At the rear of the café, there is a charming courtyard, and I can personally recommend the scrumptious homemade carrot cake.

High Street is home to an eclectic range of shops, many brandishing names like ‘Cat and Cauldron’ and ‘Natural Earthling’. The quirky Speaking Tree Bookshop is crammed with esoteric titles, while Star Child entices customers in with aromas of incense, candles, and essential oils which waft in the air. Happy Glastonbury is a gift shop that sells crystals, cards, jewelry, and various other new-age paraphernalia. Along the street, I passed an artist creating a beautiful chalk mandala on the sidewalk and a busker playing a hand drum. Being a hippie at heart, I was in my element and spent hours browsing through the weird and wonderful shops and absorbing Glastonbury’s very distinctive vibe.

Although I was in town at the wrong time of the year, I was told about the West Country Carnival by locals– a parade that visits Glastonbury in November and has its roots in Bonfire Night. The event, which takes place annually in England, celebrates the foiled attempt of Guy Fawkes to blow up the Houses of Parliament. Participants parade through the streets in extravagant costumes, bands play, and carts are spectacularly illuminated by tens of thousands of lights. I made a mental note to try and return one year for the pageant.

Ashrams, Retreats, and the Premier Inn

There are a variety of accommodation choices in the area. Naturally, this being Glastonbury, there are plenty of alternative options, which include ashrams and retreats. At the other end of the spectrum, a Premier Inn and Travel Lodge both offer reasonably priced rooms. I stayed at The Moon in the Apple, a B&B in a cozy 1870s cottage run by the friendly Tor and Julie. A perfect base, it was within walking distance to all of Glastonbury’s attractions.

Sue is from Brighton on the south coast of England and is passionate about travel and adventure. She has been backpacking and housesitting her way around the world since 2012 and has lived or traveled in over fifty countries. Sue has written articles and guides for a wide range of travel magazines and websites.