The Eternal Mystery: The Statues of Easter Island 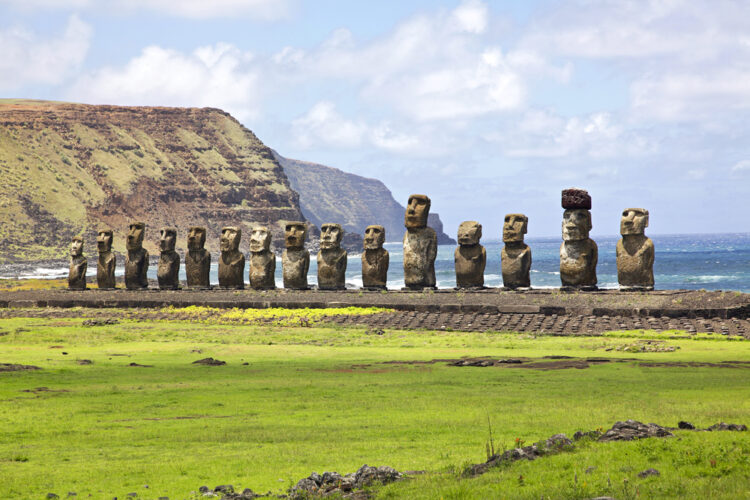 Here, the winds speak. And the spirits speak if you listen for them. Lying 2,300 miles away from Chile, the country that governs it, it’s the most remote populated island on Earth. The nearest populated “neighbor” is Pitcairn Island (yes, that Pitcairn Island, of “Mutiny on the Bounty” fame), in the South Pacific – 1,300 miles away.

Easter Island may well be the most mysterious place on Earth. The people of stone, if they could speak, could tell us their mysteries, and the mysteries of the people who built them. But, of course, they cannot speak. They can only watch, as generations are born, live, and die in this sparsely populated corner of the world. Sparsely populated? There are some 5,800 residents here, spread out over some 63 square miles (for the non-mathematicians among us, that’s less than 100 people per square mile). Most of them are descendants of the original Polynesian people (Rapa Nui) who first settled here around 300 A.D., and are thought to have built these statues between the 11th and 17th Centuries. 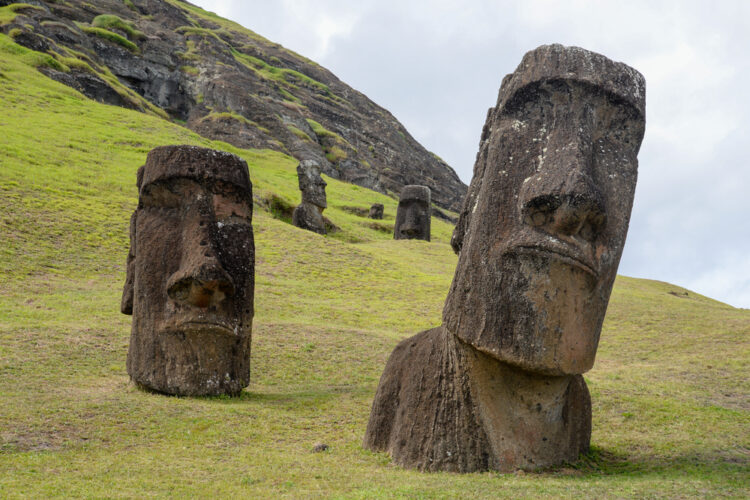 Their numbers declined dramatically in the 19th-Century, from European diseases, tribal warfare, and Peruvian slave trading; at one point the native population was down to 111 souls, and their people were in danger of becoming extinct.

But their ancestors, however, left a legacy of hard work, artistry in stone, and mysterious religious beliefs. Their dedication is today evidenced by 638 Moais, stone statues as high as 65 feet, generally of human forms, along with more than 300 ceremonial platforms, and thousands of structures related to agriculture, funeral rites, housing and production, among them a number that were never finished. Most were carved at the quarries of the Ranu Raraku Volcano, filled with relatively-soft rock.

It’s hard to believe that this silent place of awesome vistas and rolling barren hills and tradewinds – now Rapa Nui National Park – was actually called “The Center of the World” by the people who built these statues.

The statues were carved into the quarry wall and then transported – somehow! – to different Ahus (ceremonial centers). Work ceased after the tribal wars, and the remaining Moai were left there. Eventually, the elements took their toll, and some of them are partially buried today. 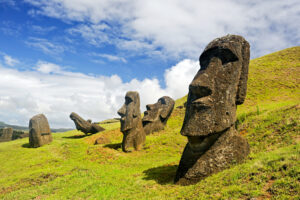 Every tribe had its own Ahu, with statues on stone platforms facing the villages, their backs to the sea. These figures represented ancestors, an integral part of the native cultures. These ancestors were sort of “watchmen’ (and women) who would watch over and protect the tribes. The only Moai statues facing the sea are on the eastern part of the island. According to legend, these seven statues represent the navigators that King Hotu Matu’a sent to follow the rising sun in search of lands for his people after a clairvoyant priest dreamed that their homeland would be destroyed.

Easter Island got its name on Easter Sunday, 1722, when a Dutch captain sailed his ship into the harbor, was greeted by the locals, and described the Rapa Nui as “a subtle culture of beautiful women and kind men” (who, of course, had never heard of Easter).

Following the tribal wars, the Rapa Nui people reorganized their society through the cult of the Birdman. Family chiefs would compete in the quest for the egg of the manutara, a migratory bird that nested near the village of Orongo. Competitors had to swim (sometimes among sharks!) to an islet, find the bird’s first egg, and bring it back intact. The winner would be named Tangata Manu (Birdman).

Today, Orongo is a silent sentinel to the past, with 53 stone houses (including some built into the sides of hills), and petroglyphs symbolizing fertility, the Birdman, and the Make Make, the great divinity in Rapa Nui culture.

Most of the hotels, restaurants, and nightspots – as well as about 60% of the residents of Easter Island – are in the town of Hanga Roa, the island’s capital and main harbor. At the Hanga Roa Crafts Market, you can find some excellent examples of revived native arts and crafts, and some unique things to bring back home. And you can watch some expert haggling, as well. The Padre Sebastián Englert Anthropological Museum offers some clues to the past, preserving and promoting the Rapa Nui culture. Adjacent is the Tahai Ceremonial Center, a place where important events were apparently celebrated (or mourned), and with a number of distinctive statues.

Easter Island was formed by a series of volcanic eruptions that created some 800 caverns. And these caverns occasionally yield some interesting clues to the past. Researchers have found about 8,000 yards of caverns, apparently used to hide from enemy tribes. Today, however, these caverns are easily accessible…and easily explorable.

Interpretations of the statues vary widely. For example, at Ranu Raraku there’s a Moai that appears to be kneeling. Some say it represents a priest, while others think it’s an ancestor guarding the quarry. This spot is home to the biggest Moai on the island. Measuring an astounding 65 feet and lying on its back, this half-carved statue is still actually attached to the quarry rock; it never received a “final resting place” of its own!

Easter Island, like its statues, petroglyphs, and caverns, is eternal. So are the mysteries that continue to swirl around it.

And will most likely continue to swirl around it for time immemorial.