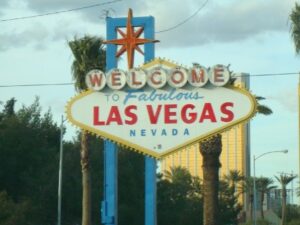 A wilting figure sits on a sunny Las Vegas sidewalk. His mouth feels as parched as the Nevada desert that surrounds him. Somewhere in the back of his head, a popstar taunts “that’s what you get for waking up in Vegas” repeatedly. His hangover thuds through his head as the lights of Sin City just won’t stop flickering. His voice cracks, “Hey man, you wanna buy an iPod? I gotta get money to get home.” I awkwardly pretend he’s not talking to me and think “yeah, buddy, I’ve been there – came to Vegas without a plan and got taken to the cleaners.”

America’s playground of the young and beautiful (and rich and reckless) attracts millions of tourists every year, and a lot of them show up wanting to party like they’re in a surreal movie. What happens in Vegas may stay in Vegas, but if you’d like to escape Sin City with the last vestiges of your sanity and perhaps some cash for the ride home, there are a few things you should avoid doing.

Don’t:
1. Gamble, unless you know what you’re doing. In fact, if you have anything that surpasses a mild interest in gambling, you should probably stay away from it. Whether it’s slot machines or card games, the house always wins, and it can easily win over the budget for your entire trip in one afternoon.

2. Deal with ‘promoters’ on the street. The folks flicking various business cards about on every Vegas sidewalk are poor excuses for promoters. They’re likely to sell you entrance to the club of your choice for the same (or more) than the actual club would charge, and guarantee no wait outside. When you get to the club, they won’t let you jump the queue and aren’t even obliged to let you in. Cut out the street folk and go straight to the club instead.

3. Waste time in the ill-lit underground clubs that give you an experience you could get anywhere – go straight to The Palms Hotel and party in Ghost Bar. It’s a little off The Strip, but the sky-high setting is the best place to view Vegas from at night.

4. Drink at the same pace you would at home. Ordering a Vegas vodka-cranberry will give you a drink that’s roughly 80% vodka and 20% cranberry juice. Chugging these like they’re regular will make you end up face-down on a moving walkway and hungover to within an inch of consciousness the next day.

5. Waste money on the fancy (and small) drinks in the center of The Strip. Go downtown to the older casinos and Fremont Street where a staunch 32oz cocktail will only set you back about $10.

6. Get messily drunk inside a club or casino. They people who work in Vegas have seen it all. They have zero tolerance for what you and your drunk buddy are trying to say to the world and will kick you right out in a friendly but firm manner. 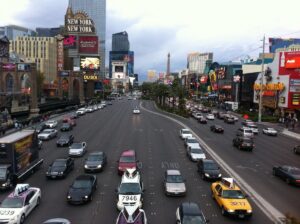 7. Expect to travel anywhere quickly, sober or not. Since tourist Vegas is centered around one road, you might think you could hop along easily from place to place, but there is always traffic, both human and vehicular. A regular bus can take up to two hours from Mandalay Bay at the top of The Strip to Fremont Street at the bottom. An express bus will take roughly half that and a cab about a third.

8. Shop at the over-priced stores in the casinos or city center. There are outlet malls at either end of The Strip where barrel-loads more clothes can be bought for the same price.

9. Try to do anything other than go to bed when you are severely intoxicated. Once you’ve managed to make it back to your hotel, do not go back out again. Do not gamble. Do not search for food. And definitely do not go shopping. It can all wait until tomorrow. 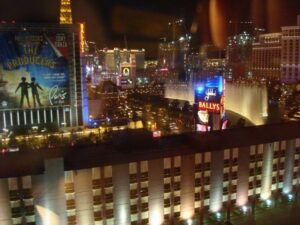 10. And finally, listen to any whims or ‘gut instincts’ that arise while you’re in Vegas. Even if you’re a rational thinker in the real world, your booze-soaked, LED-saturated brain is very likely to lead you astray if you let it run rampant in Vegas.

It’s safe to guess that even if you keep these tips in mind, your Las Vegas experience will still be a crazy one that could add many if your own tips to a guide like this. That’s why we love it and why we just keep going back. Viva Las Vegas!

Monica Davies studied Journalism in Pretoria, South Africa. Here, she realized she didn't care about reporting the news, and decided to embark on a lifelong search for awesomeness. She's lived in London, New York and Pretoria and is currently on a tour around the world, hoping it'll finally put some of her wanderlust to rest. Read more about her travels at www.athousandguitars.com or follow her on Twitter @thousandguitars.