Five Carnivals Around the World 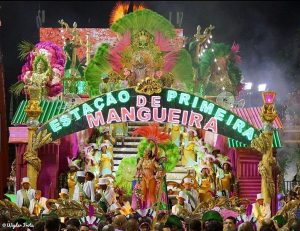 People from all over the world tend to seek out vacations where they can bask in the sun and enjoy a climate that’s much hotter than then they are used to on a daily basis. But how about you double your pleasure by visiting your chosen destination when they celebrate carnival? Carnival around the world is one of the biggest street parties at any given destination. People flood the city streets in colorful costumes that showcase the culture and heritage. 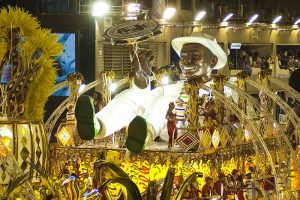 Ranked as one of the best carnivals in the world, Carnival in Rio de Janeiro happens just before Lent. Famous for its samba beat and barely-there female costumes, millions of people descend to Rio to partake in the festivities. Rio essentially shuts down to facilitate the carnival, which has a traditional start where the symbolic city keys to the king of carnivals, also known as Rei Momo. Then carnival is underway as the Samba School’s Parade makes its way to the Sambadrome. The parade is made up bright and colourful costumed masqueraders who perform traditional Brazilian dances and sing either on the street or on elaborate floats. The sound of samba drums and Bahia music fills the air, whistles blow in time with the rhythm and four days of revelry begins. 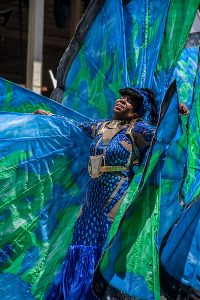 Carnival in Trinidad and Tobago – Caribbean

The twin islands of Trinidad and Tobago host the biggest carnival celebration in the Caribbean which concludes at Lent. Known as the birthplace of calypso and the steel pan, these instruments are represented on the road during the two-day parade and in the big carnival fetes on the run up to the big days. The capital city of Port of Spain is where most tourists head to with less taking part in Tobago’s carnival celebration. The masqueraders make their way through the streets following huge music trucks that vibrate the very ground with bass that booms in your heart. Most of the masqueraders are made up by females who are dressed in sequins, feathers and glitter similar to that of cabaret/showgirls. To ensure you want a costume you will need to look online from about September when the bands launch their new costume designs. The schedule leading up to the two days of carnival are filled with all-inclusive premium fetes where you can get to see the artistes perform live. The Carnival Steel Pan competition takes place prior to the carnival too. For spectators you can book at seat at the Grandstand at the Queens Park Savannah where the masqueraders bands dance cross the stage in all their glory. 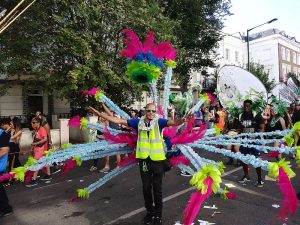 On the August Bank holiday, Notting Hill in London plays host to the biggest carnival in Europe.  The Caribbean community has been building on its Caribbean roots since 1966, when the first carnival took place. Today, it attracts crowds in excess of one million, featuring at least 60 bands that take to the streets in lavish costumes. When you are not partying, there is a plethora of West Indian dishes such as jerk chicken, callaloo, rice and peas, and curry chicken and roti which is readily available from vendors. Guest artistes fly from the Caribbean to play on the music trucks. Some of the big names are Allison Hinds from Barbados and Machel Montano from Trinidad, but there are some many genres of music you can expect to hear soca, calypso, reggae and even dance-hall. 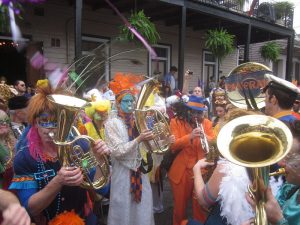 The French quarter in New Orleans marks Mardi Gras. It is a celebration that is rooted in medieval Europe history. Today it is a mixture of flambeaux, beads, doubloons and super krewe balls which lasts for two weeks concluding on Shrove Tuesday.

Most tourists head to Bourbon Street which is a hive of activity. Here, you can view the most outrageous costumes on display including drag and leather. The marching band parades, masked riders and elaborate floats journey down St Charles Avenue. There are beads, stuffed toys and a trinket flying through the air to onlookers outstretched hands ready to rumble to claim it as theirs. Many of the krewes (parade bands) dress in full costumes of green, purple and gold which are the official mardi gras colors. The music playing is diverse featuring ragtime, Dixieland, brass bands and even Indian chants. There is definitely a lot to see in this exuberant carnival. 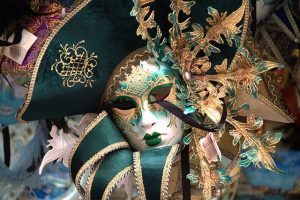 The Carnival of Venice (Carnevale di Venezia) is located in the Italian city of Venice. It is a Lent related carnival and has about 3 million visitors. The attraction of this carnival is its use of baroque masks. There are about seven styles of masks to choose from full face to half-mask to masks with beaks. The masks are judged in a contest known as the most beautiful mask (la maschera più bella) and is open to anyone. It takes place in St Mark’s Square where there is a carnival parade. There is also a boat procession along the Grand Canal.