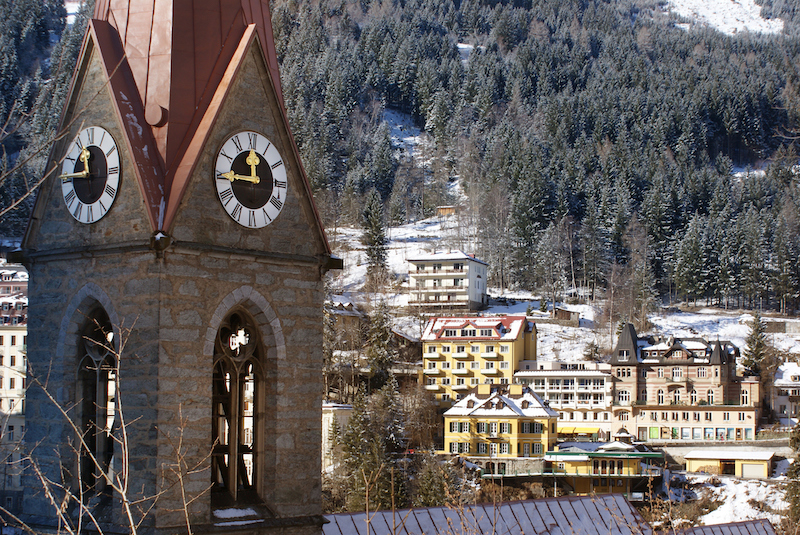 Considered the jewel of the Austrian Alps, the Gastein Valley lies an hour south of Salzburg, in the heart of the majestic Austrian Alps. Other than the fantastic thermal spa and panoramic views of the Hohe Tauern National Park, the mountains surrounding Gastein are what it’s all about.

From the west side of the valley, cable cars rise two miles to the summit of Stubnerkogel. From there, a variety of ski runs and several lifts connect to other peaks and to the village of Bad Hofgastein. From the south side, a couple of chairlifts carry skiers up to Graukogel. An alternative is to take a bus up the winding road and through some tunnels, to Sportgastein, at the head of the Gastein Valley, which boasts the highest altitude and the best ski conditions. Another bus runs down the valley to Dorfgastein, where a gondola carries skiers to the summit. Gentle trails lead down the other side to the picturesque Grossarl valley.

In the four ski areas of the Gastein Valley, skiers and snowboarders are greeted by more than 208km of groomed slopes with deep-snow and mogul runs ideal for carving and free-riding. There are also numerous gentle slopes ideal for family skiing. Its optimal elevation, broad snow coverage and good snow-making facilities ensure reliable conditions from the end of November to the end of April. The 140m-long pedestrian footbridge on the Stubnerkogel – Europe’s highest suspension bridge – and the new Glocknerblick viewing platform are worth the trip; but for skiers the highlight is one of the longest downhill runs in the Alps from Hohe Scharte (2300m) to the bottom station of Schlossalm.

• The hill farm/snack alpine hut on the Graukogel is a good one. The hut is open when the Graukogel lift runs.
• Bellevue Alm is one of the oldest ski huts in Europe and is found on the southern side of the Stubnerkogel with ski slopes and a toboggan run right outside. On offer is traditional, regional cooking.
• Goldbergstub’n in Sportgastein has a traditional inn culture with a great hut atmosphere and a glorious panoramic view.
• Lederhosenbar is Bad Gastein’s smallest and craziest Austrian after-ski bar. Draft your own beer at the table.
• The Silver Bullet Bar in Grillparzerstrasse is the most popular Aprés-Ski in Bad Gastein.

For Your Good Health: Gastein gained international renown as a vacation spot in the 1800s when much of Europe’s royalty trooped to the valley’s thermal waters for rejuvenation. The warm water in the valley’s two public Spas (Alpentherme in Bad Hofgastein and Felsentherme Bad Gastein) comes directly from the 17 thermal springs, deep within the mountain. To benefit from a Radon bath (lasts approximately 10 minutes) at one of the spas, you need to book in advance. Beware of the steam room – its unisex and nudity is mandatory.

• On your way down the slopes to Bad Hofgastein, Aeroplanstadl is a terrific bar. Its where people like to party after spending the day on the snow. When the sun shines the outdoor terrace is filled with skiers.
• The Glocknerkeller, also in Bad Hofgastein, is primarily a dance bar/nightclub; however, as it opens a 7 p.m., it also attracts the Apres Ski crowd. Table dancing is spontaneous and the ambience a buzz.
• The Ice Cube Bar in the heart of Bad Hofgastein is perfect for sipping cocktails and people watching from the picture windows.
• You cannot say you’ve experienced genuine Bad Gastein nightlife unless you check out Eden, the resort’s best-known bar. It’s the number one rendezvous in the heart of town, filled with people from around the world.
• Ginger n’Gin is a great restaurant and bar within Hotel L’Europe (Bad Gastein) where you can choose from more than 134 gins! Every night is party night with a great DJ and fascinating rooms in a beautiful belle époque building.

Eat Bad Gastein: Austria’s food is not fully German nor is it fully Bavarian. What it is, is rich with influences from Italy, Germany, Hungary and a hint of The Balkans, resulting in a Bohemian affect. During Autumn, game is on the menu so try wild boar meat stew for a distinct Austrian mountain cuisine taste. If you like soups, try Tafelspitz and Rindsuppe. For a rich hotpot dish, you can’t go wrong with the Hungarian-derived goulash. Selchfleisch is also a great smoked dish served with dumplings and sauerkraut. If you’re adventurous try the other game-based dishes of deer, duck, rabbit, and partridge; and be sure to leave some space for ‘curiosity’ cuisine. The Gastein valley is also known for their pastries and cakes. The top of the list are the traditional Kaiserschmarrn and the Sachetorte – an apricot jam-laced chocolate cake. Don’t forget to try the famous Apfelstrudel and the fabulous cheese filled Topfen.

Sleep Gastein: If you are bored with the uniformity of five-star hotels and prefer personalized treatment, make a reservation at the 89-roomed Grand Park Hotel in Bad Hofgastein, and find its understated elegance and obliging service staff. The hotel itself, Georgian in style, is located well for a skiing holiday and is only short walk to the lifts. Rooms are large with huge comfortable beds, a lounge and all the other mod cons. All the rooms have balconies with breath-taking views of the mountains. The marble bathroom, with its Jacuzzi bath and rainwater shower is unadulterated luxury. Dinner is a skillful infusion of haute-cuisine with traditional Austrian cooking, bringing to your table a five-course gourmet heaven. Tip: ask after a bottle of Grüner Veltliner. Half board rates start from €238 in the high season.

If you love to ski, you can’t go wrong with Gastein. It has the right slopes and the right amount of snow to make for a memorable skiing adventure.

Where to Ski: Avid skiers and snowboarders, carvers and freestylers all head to the Gastein Valley, which has a total of 208km well-groomed pistes, around 50 ski-lifts, numerous ski trails, and over 100km winter walking trails. In its four ski areas there are 64 easy, 117 intermediate and 24 difficult pistes and modern lifts available for all abilities and ages.

Gastein, including Dorfgastein, Bad Hofgastein, Bad Gastein and the winter ski resort of Sportgastein (at 2700m it’s the highest point in the Ski Amadé area), is one of the five ski areas of on the Ski Amadé network – Austrians biggest Ski federation, offering 760km of slopes including 356 different pistes and 270 lifts.

Lifts open from the end of November until the end of April. Six day lift-passes start at €244 per adult. If you’re traveling in a group, be sure to seek out lift discounts. Also, there are special packages for the over sixty’s and for families. Information about lift pass prices for the different ski areas can be found on the Gastein Tourist Office’s dedicated ski website.

Something Different: Whizz through Sportgastein on a dog-sled led by a team of up to six huskies or follow in the snowshoe tracks of author Jack London exploring the snow-covered landscape of the Hohe Tauern. Click here for further details.