The Sherpas of Everest: The Economy Of The World’s Tallest Peak 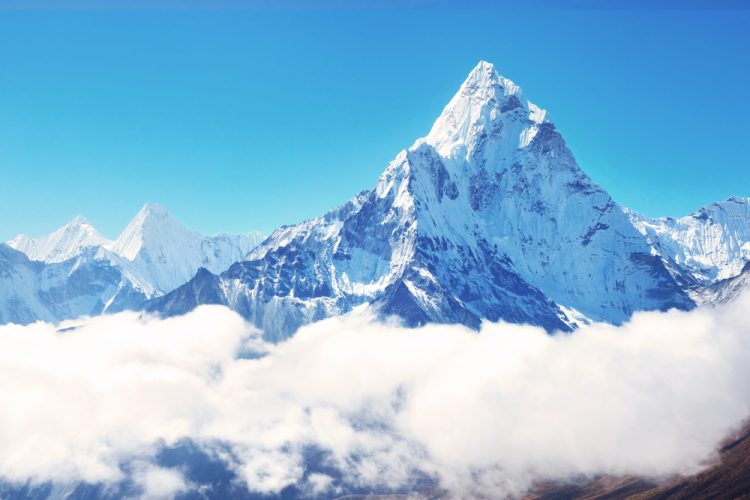 In the closing scene of the 1924 film Epic of Everest, a blood-red sunset sinks below the horizon of the Himalayans in Tibet. Photographer Captain John Noel captured the brutal conditions and desolation of the landscape, as well as the humanity and courage of the Tibetan people. Epic of Everest is one of the earliest visual recordings of life in Tibet. As well as documenting their lives, the film also framed the assault on Mount Everest by the British in the 1920’s by George Mallory as an act of imperial conquest. This is shown most clearly when, despite the climbing teams’ admiration for the hardiness of the Tibetans, they announce with clear relief “All whites are safe!” during an avalanche. The accident claimed the lives of seven of their porters. Epic of Everest is one of many examples of the fraught and complicated relationship between the wealthy climbers who hire them and the native Sherpas of Everest.

The long lines of climbers waiting in the death zone at the top of Everest is a relatively new development. Prior to the first summit in 1953, the mountain was closed to outsiders for centuries in both Nepal and Tibet. Once the headlines proclaimed the incredible feat, other climbers came running to trek the peak. Since 1953 almost 9,000 climbers have attempted the route, and 305 have perished on the attempt. 2019 came in as one of the deadliest years on the slope with 11 deaths.

As Everest continues to become more and more crowded with every passing year, so do the dangers. Overcrowding has led to many incidents of climbers waiting in 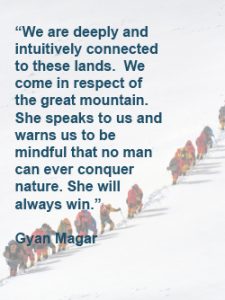 line on the treacherous mountaintop to take their souvenir photos. Even worse, the majority of these climbers are unskilled, relying more heavily on their Sherpas than an experienced climber. Critics have laid much of the blame for the recently bottle-necking on the mountain at the feet of the governments issuing permits, pointing out Nepal’s reluctance to reduce the number of permits. The government has shot back that the climbers represent a significant source of income for the country, and reducing the number of climbers could put many Sherpas out of work. This debate has raised the question of who is at fault for the huge flood of inexperienced climbers and their risk to Sherpas: the wealthy buying permits, or the governments reluctant to regulate who can and should purchase those permits? Is the lack of other economic opportunities in the country fueling these dangerous occupations?

Nepal began the push to bring in revenue from the world’s fascination with Everest in the 1980’s, bringing in much-needed revenue from the wealthy climbers. This model has little changed in the decades since, attracting the many ambitious, wealthy, and inexperienced adventurers. But as the market developed, entrepreneurs began to seize on the opportunities presented. Budget travel companies sprung up, offering guided treks for as little as one-third the price of their high-end competitors. Experience indicates a company can safely manage as many as ten climbers at a time, bu budget companies depend on high volume in order to make a profit, often booking dozens of clients on expeditions.

An analysis was conducted after the 2014 ice avalanche disaster and the 2015 earthquake, and it was found that between 2011 and 2017 that 12 out of the 17 deaths on the South Col route were clients of the budget outfitters. Of the total 305 deaths on Everest, over one-third of them are Sherpas. On average, four people climb to their deaths every year on Everest since the first attempt in 1921.

Every year, Everest brings in the majority of Nepal’s $370 million revenue for adventure travel. Every spring, over 800 climbers arrive in both Tibet and Nepal to begin their ascent. Each of the climbers buy a permit starting at $10,000, and many of them spend even more on travel packages ranging from $45,000 to $130,000.

These packages have Sherpas doing most of the dangerous work, and they have begun to speak out. Gyan Magar, an experienced Sherpa and expedition leader, spoke about the increasing dangers overcrowding are presenting:

“Sherpas are a strong people. They have always believed their profession is a noble one and honor their guests and the mountain. But safety has become an issue. The problems we encounter are working with inexperienced climbers who have seen Everest in the movies. They come determined to get to the top, at all costs.”

And the cost is sometimes the lives of Sherpas.

Gyan Magar believes “the biggest problem on Everest is the toxic mix of inexperienced climbers and unqualified guides,” and considers this status the new norm. Many Sherpas come from the Khumbu region, settling there more than four centuries ago. Khumbu served as the Trans-Himalayan trade route for a long time, and in the 1950s and 1960s could only be accessed by foot or on the backs of animals. Agriculture and livestock were the main staple of the local economy, as well as trading goods between Nepal and Tibet.

Once tourism was there to stay, the Sherpa community left the farms behind to take up jobs as guides. The exposure to Western values and lifestyle began to wear down on their traditions, value, and health. “At base camp, they follow the westerners. They drink and smoke. Their judgment becomes impaired. It seems that they have given up. The job is dangerous. They have a responsibility. But now they are afraid,” says Gyan Magar.

These Sherpas are living continually isolated lives, revolving around the climbers and away from their own community. They tend to live in or near the camps where climbers arrive. The pressure from climbers drives the Sherpas into dangerous situations, all in the name of making a living. In a country where the average income is $700 USD per year, the chance to make $5,000 USD in just three months is too much to pass up. Work in other sectors is hard to come by, and even though there are deaths every year, the income has helped create a middle class in an isolated community.

Sherpas continue to risk their lives for ambitious climbers today. They serve as porters and guides, scouting the trail first to break deep snow and ice, lay ropes, and carry heavy equipment. They are more likely to be killed in an accident such as avalanches or to suffer altitude sickness, oxygen deprivation, or hypothermia. They are regularly disabled by rock falls, altitude-related illnesses like stroke and edema, or frostbite. Once a Sherpa is above base camp, they are ten times more likely to die than a commercial fisherman, considered by the United States Center for Disease Control and Prevention as the most dangerous job outside of the military. No other service industry in the world overlooks such widespread injuries and fatalities in the name of paying clients.

Despite the innumerable dangers, many Sherpas continue to return to Everest every year to work, even after major disasters. In 2014, the deadliest accident ever recorded on Mount Everest took the lives of 16 Nepalese Sherpas when an avalanche on the mountain completely wiped out the base camp. Sherpas called on the Nepalese government to establish regulations to improve their working conditions, including boosting pay, upping life insurance covered, and providing a stipend for funeral expenses. The government doubled the insurance payout from $5,500 to $11,000, but the other demands were not met. Gyan Magar personally felt the lack of action on the part of the Nepalese government was an insult, especially considering the millions generated on the “backs of the Sherpas.”

The pressure placed on Sherpas has only multiplied the risks on the mountain. Magar tells a story about a recent incident in which a company bringing in larger groups to Everest promoted an inexperienced Sherpa on the spot to assist an older client from Pakistan. The trainee brought up concerns about the climber’s health, but was informed he needed to proceed or lose his employment. They reached the summit late in the day and had difficulty on their descent back. They were eventually rescued by more experienced Sherpas from another company, but unfortunately the young man suffered severe frostbite and had all of his finger amputated.

While technology is steadily improving to help stave off another 2014 disaster, the mountain continues to be open to climbers with little to no experience. While there are more experienced guiding services on offer now than ever before, the huge influx of bodies in these dangerous conditions are still creating a hazard to themselves and the locals who guide them. Nepali-owned companies are beginning to gain more influence and market shares on Everest as climbers realize foreign-owned companies present more risk. The climbing community has lauded these moves as a first step to making conditions safer, and welcomed by many Sherpas including Magar. But it is only a first step.

Many have wondered if it were possible to make the climb to the peak of Everest safer, and based on other major peaks around the world, the answer is an enthusiastic yes. On Alaska’s Denali, park rangers perform safety checks and have mobile rescue teams at the ready. In Argentina, Aconcagua has mountain rangers on constant patrol of all of the higher camps. Longer-term solutions include reforms so only climbers with previous experience would be allowed to attempt the summit, and that Sherpas who did not work as guides would take a climbing course. Other solutions presented include capping the number of total climbers to 500 per season, including the guides and porters. These policies could positively impact the livelihoods of the local Sherpas and the climbers themselves, and give the Sherpas more autonomy in the process of screening who should and shouldn’t climb. As Magar points out: “Sherpas are proud of their profession and wish to continue the lifestyle. However, as humans, we must have more of a say on who will make it up the mountain and who will not. No one should play roulette for a paycheck.”

The Western conquest of Everest every year has brought much-needed income to its locals, but the risks that could be easily mitigated with conscious reform are rendering these same locals as disposable. By giving the locals the power to decide who climbs, accidents and fatalities will fall, and respect will once again be given to the people who know the mountain better than anyone. As Gyan Magar states, “We are deeply and intuitively connected to these lands. We come in respect of the great mountain. She speaks to us and warns us to be mindful that no man can ever conquer nature. She will always win.”

Carol Dimopoulos is President of Perillo’s Learning Journeys where she brings her passion for personal transformation through transformative travel and community service based programs to global destinations in Europe, Asia, The Americas, Africa and The Middle East. She is a prominent expert in both business and academia in the field of niche market and transformative travel. She holds an MBA and is currently a doctoral student at The University of Illinois Urbana Champaign.