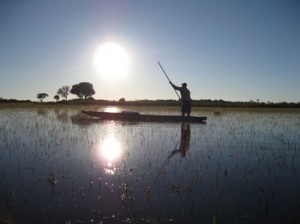 If you’re ever about to be attacked by a lion, don’t just stand there shaking – run directly towards it flapping your arms wildly and making a massive hullabaloo.

Shall I repeat that, just in case you can’t quite get to grips with the concept? Don’t try to run, because this is one race you aren’t going to win. Your only chance of survival is to scare the lion more than it scares you, says Joseph Makhulo, a tracker in Botswana’s Okavango Delta. The lion will be so intimidated by your superior aggression that it will turn and flee, he promises.

I mull over the theory as I stand on a little island in the delta, watching a magical sunset be completely outclassed by the moon rising in a vivid ball of red. “What happens if you run towards the lion and realise it isn’t backing down?” I ask. Ah yes, Joseph admits, it does only work about 60% of the time. I make a mental note to try the alternative strategy of standing still and giving the lion a cold, hard stare. 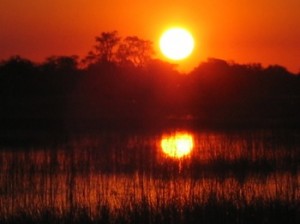 Joseph tells me I should meet his uncle, who is scarred from head to toe by lion claws. That’s scarred, not scared, and there’s a mighty difference. The bushmen perfected the technique of chasing lions away from their kill because it’s a lot easier to steal their food than to bring down an antelope yourself. But it’s tricky if they’ve killed a zebra, because that’s their favourite meat and they’ll stand their ground. That’s when you have to wade in and fight them for it, Joseph says, without a trace of flippancy. Just ask Uncle Scar-Face.

Bushmen’s tales told over camp fires in the Okavango add a mystical aura to an already fascinating adventure. I wasn’t convinced about the lion-tackling tactics, but I was perfectly happy to believe their hippo stories.

The delta is a watery wilderness where the wildlife has adapted to the soggy conditions. Man has adapted too, and the most common  – and sometimes only – way of getting around is by punting a skinny little mekoro boat through the reeds. It’s a bit like being on a Venetian gondola, but instead of singing, Joseph is entertaining me by imitating bird calls. He’s so good I expect a fish eagle to swoop down and try to mate with him. 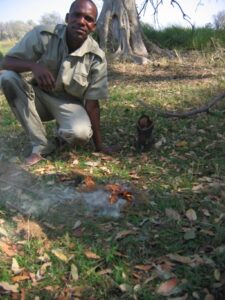 We’re punting through channels in the reeds that have been thrashed out by hippos. There’s a sunset curfew because hippos reclaim their channels at night, and a fragile mekoro is no match for a hungry hippopotamus.

Later I’m standing on a termite hill so tall it gives me a view across the whole landscape. I watch yet another spectacular big-sky sunset, and as the dusk takes hold a chorus of insects and frogs begin to generate a noise far out of proportion to their size. Thankfully my ears don’t pick up the high-pitched whine of enemy number one, the mosquito.

A ranger tells me the distinctive smell wafting across the plains is wild sage, used by the locals to keep mosquitos at bay. “Is it more effective than Tabard?” I ask. “Stick with the Tabard,” he says. “Lots of it.”

Early the next morning I wobble into the mekoro again as a damp mist still hangs over the delta. Joseph is describing the bizarre breeding habits of the large yellow spiders who’s webs we’re disturbing. Mainly it’s my face that’s disturbing them, and after unravelling another skein of web from my hair I grab a reed and wave it in front of me as a web-demolition tool.

Joseph plucks a water lily and shows me the little pattern of holes that make its stem a natural drinking straw, then carves it into a water lily necklace.

As the morning warms we glide onto a island where he crouches down in the sand to demonstrate his party trick. He selects a stick and carves a few notches in it. Breaks up some elephant dung and makes a neat little pile. Places the notched stick on the dung, and pours a few grains of sand over it to add friction. Then he puts the tip of another stick in the notch and twists it vigorously. 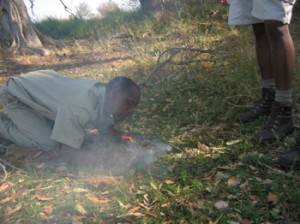 If this was anywhere but the mystical Okavango, and anyone but Joseph the bushman, I’d be snickering behind my hands. Instead I crouch down with my camera, supremely confident he is about to produce fire. There’s a scent of smoke, a glowing ember. Joseph kneels down and gently blows, almost losing an eyebrow as a lick of flame spurts out.

That’s when I realise a safari is all about the people. You think it’s about the animals, but the humans are just as important. A good guide can make even spiders and frogs exciting.

Joseph may not be able to show me prides of lions or herds of elephants in the watery Okavango, but this man can conjure up fire with his fingertips.

Botswana Okavango Delta wildlife safari
Previous ArticleTake a Look Behind You – Paris, France
Next Article Finding the Green Man in the Churches of Europe
Lesley Stones