To see and really know the Islands of Hawaii takes a minimum of six trips, one for each island. I for one would be willing to make that kind of commitment. But each island in Hawaii is a world of its own, and each deserves a leisurely pace, an opportunity to get to know it up close and personal. Far too many visitors to the islands make the mistake of trying to see and do every island in a week, bouncing around from island to island in an effort to soak it all in. Want some advice? Explore one island at a time and save the rest for the next visit. 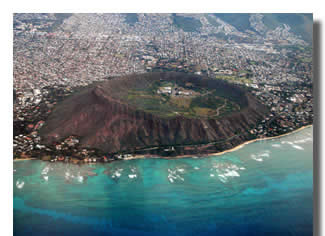 To really make the most of your island vacation, be adventuresome and rent a car. Your travel agent will know where to find the best, hassle-free deals. In fact, right now there are opportunities to visit Hawaii at rates that are less than those offered in recent years, so now is a terrific time to go.

Jeeps and convertibles have a certain appeal in Hawaii… you’ll find that out as soon as you get there. Remember, though, that your car is all about getting you to the outer reaches of the islands – once there, step outside and experience the amazing sights, smells, sounds, views and vistas that make the experience that is Hawaii.

Oahu is a great place for exploring. Everyone has their favorite Island….but I like Oahu’s mix of urban and natural beauty, the excitement of Honolulu and the amazing beauty of the interior and the perimeter. One of my first encounters with Oahu, I navigated in a rental car. The scenery is amazing, and on a nice day, which is most days, the drive is exhilarating.

A drive around the perimeter and interior of the island of Oahu is a great way to get to know the geography, the people and theterrain in a really interesting, inexpensive way. The drive is not as famous as Maui’s Road to Hana, but the Oahu route is well worth the time. So grab a map, sit down with your travel agent, and plan your drive.

In total, the drive around the eastern and northern perimeter of Oahu, returning through the interior is about 120 miles and takes the better part of five to six hours if you go slow enough to enjoy the scenery and stop along the way. But there is so much 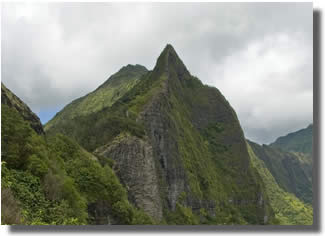 to do and see along the way that accomplishing the entire drive in a single outing is hardly necessary. You will want to be drawn in far too many times by the amazing vistas and the quaint towns. We will leave the leeward, or western, side of the island for another trip and instead return through the center of the island. Likewise, the popular sites of Pearl Harbor, Honolulu and Waikiki we will leave to your own explorations!

Start by driving to the 760 foot Diamond Head, one of Oahu’s most amazing and well-known landmarks. The mountain towers over everything around it and you can either drive or walk to the top. Stop wherever you feel inclined – you’ll have many excellent opportunities. You will be struck by the scenic beauty of the island, just moments outside of busy Waikiki. If you feel up to an early morning hike to the top of Diamond Head – but remember it’s more than 100 stair steps to the lookout. At the summit, you will be treated to a panoramic view of much of the southern half of the island.

As you leave Diamond Head, you might consider a stop at the Hanauma Bay Nature Preserve. This horseshoe shaped bay is home to many species of tropical fish and offers up some of the best snorkeling areas on the island. 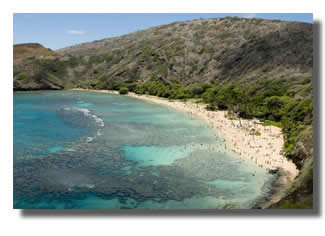 There is a small entry fee and during peak seasons the area can fill quickly. Heading up the eastern side of Oahu on Route 83 West, you will pass through all of the small towns that gave rise to great surfing legends. There are dozens of places of interest along the way, including the Byodo-in Temple, a replica of a 900 year old Buddhist temple in Japan. If you are a fan of Japanese architecture and gardens, the stopover is worthwhile. Or spend time at the Polynesian Cultural Center to learn about the history of the islands and the vast sweep of the Polynesian people who populated the most remote islands in the world, arriving in only their small, hand crafted boats.

You might want to take a quick stop at Sunset Beach, the famous surfing beach where the winter surf can deliver the enormous waves that you see in so many pictures of the Islands. Just a quick warning – the ocean here is rugged and rough, not a place for a novice swimmer or a beginning surfer!

Stop at Waimea Beach Park, which is known for its immense winter waves more than 30 feet high, though it is calm enough to easily swim in the summer. The Waimea Valley Audubon Center sits on more than 1,800 acres of pristine land and boasts more than 6,000 species of plant life. There is a 45 foot waterfall within easy distance and the park is, as the name suggests, one of the best areas on Oahu for bird watching. The trails can be a bit rugged in places, so wear good shoes and take water along on the hike. 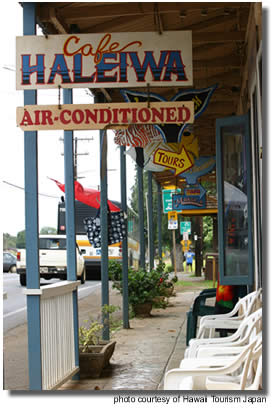 Leave early enough to plan breakfast (or at least lunch) in the small storybook town of Haleiwa. The old plantation town mixes the historic with new and is a great place for a leisurely break during your ride around the island. The town of Haleiwa has many small boutique shops and a very laid-back feeling.

At the juncture of 83 West and 99 South, you can head into the interior of the island or remain on the perimeter until you come to the end of the paved road at Dillingham Air Field. You can hike for some distance here, though the shoreline is rocky with crystal clear, but rough waters.

At this point, you can backtrack to 99 South and into the interior of Oahu. If you would like to see the famous Dole Plantations, head south on 99. Then, via H2 and H1 West, return to Honolulu and Waikiki. Along the way, you will see so much to do with so many possible detours and stops that your journey may not even resemble the suggestions above. But you are certain to see a side of Oahu that many who never leave Waikiki will never see!

Hawaii Honolulu Oahu Pearl Harbor Waikiki
Previous ArticleFreestyle on a Budget in St. Lucia
Next Article 10 things you should know when planning a trip to Melbourne
Richard B. Earls