Rome can not be seen in a day, a week or a year. No, a city with this much history takes centuries to get to know. It is literally a city of layers, one generation, one millennium building on top of the next. It is the “Eternal City”, and we are mortals. Since time is not on our side, consider moving Rome higher on your list of places to visit, and start planning now. With a little organization and a good travel consultant, your trip to Rome can be not only fun, but even deeply rewarding.

This brief overview is not comprehensive… it just represents a few, favorite “must see” spots in the city that you’ll find filled with the very essence of Rome. Take other guides and see other sights. This little stroll presents you with highlights to make sure you have the time to see Rome at the pace it is meant to be seen: at your leisure.

The key to experiencing Rome is to visit everything on foot – and just a little bit “off-hour” (early-morning or late evening when possible) to avoid the sometimes overwhelming crowds of tourists. Everyone agrees that Rome is a city to be walked, and if you are in reasonably good shape, it will not be a problem. Do not travel without your most comfortable, already broken-in walking shoes and carry plenty of bottled water and a hat for shade. You’ll be ready in no time to set off of your own, private archeological and cultural excursion in a city of antiquities, art and monuments.

First, let’s get oriented. Early on, develop a sense for the Italian titles of the common English, as they are often exchanged freely (i.e., the Foro Romano and the “Roman Forum”). The Centro Storico is on the east side of the Tevere (the Tiber) and is the center of the historical city, set amongst the Seven Hills on Rome; here you will find the Campidoglio (Capitoline Hill) and the nearby Foro Romano, Trajan’s Markets, the Imperial Forum, the Colosseum and the Arch of Constantine. Just south of the Centro Storico are Palatine Hill, the Circus Maximus, and the Baths of Caracalla, the city’s famous catacombs.

The Foro Romano, though a mass of tumbled stone and ruin, still provides a glimpse of what was once the center of the great city, and perhaps the entire Roman world. Romans conducted their public business in the Forum, and the road leading into the Foro Romano is the “Via Sacra”, the route for sacred processions. The Arch of Septimus Severus is in the center of the Forum, and nearby, you’ll find the reconstructed Senate House. The footing here is uneven, so if you or your companions are physically challenged or travel with a baby carriage, plan accordingly, allowing for extra time or assistance.

The Colosseum, or more properly the “Flavian Amphitheatre” seated 60,000 people and could also be canopied to shelter the crowds on rainy days or from the hot summer sun. The floor of the Colosseum could actually 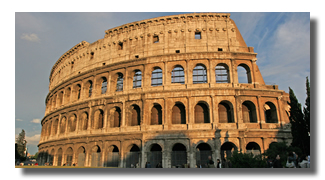 be flooded to float small boats. The numbered seats, rows and sections allowed spectators varying views of the gory, bloodbath battles between gladiators. Over the centuries, the walls of the Colosseum began to crumble, the result of earthquakes, neglect and the need for stones to build the walls and other structures that surround Rome, but lighted at night, the structure still emits a stately glow. The hours of admission to the Colosseum are staggered throughout the year, but during the height of tourist season in April – June, it is typically open from 9am to 7pm. For your convenience, elevators can take you to the upper tiers and you can rent audio guides for a few dollars. Guided tours in English are also available throughout the day. It costs approximately twelve dollars to visit the Colosseum.

The Arch of Constantine is the largest arch in Rome, constructed in the 4 th century. It stands to the side of the Colosseum, just before you tackle the heavily cobbled road of Via Sacre that leads to the Forum.

Trajan’s Markets and Forum, immediately east of Piazza Venezia and the Capitoline Hill, included a massive basilica, libraries, a temple, Trajan’s column, and the open marketplace. Trajan’s column and the markets are in excellent states of preservation. You can pay a fee for admission to the complex, or you can view it from the street on Via Alessandrina.

Piazza del Popolo was originally the site of both festivals and public executions. It is home to four lion fountains and one of Rome’s twelve Egyptian obelisks. At one end of the square, you’ll find two churches that many mistake for copies of each other. However, the space available for the construction of the ‘Santa Maria de Montesanto’ was less than that available for the ‘Santa Maria dei Miracoli’, and as a result, the Montesanto has an oval dome, as opposed to the round dome on the Miracoli.

The Campidoglio, perhaps the most beautiful piazza in Rome, sits on top of the Capitoline Hill, the smallest of the Seven Hills of Rome. It is home to the amazing Capitoline Museum, housed in the two palazzi on opposite sides of the piazza. The “Cordonata”, designed by Michelangelo, is the elongated, elegant stairway to the piazza. The building, which will appear directly in front of you, is the Palazzo Senatorio that now houses the office of the Mayor of Rome. The view from this spectacular Renaissance piazza is one of the best, especially at sunset and in the dark night. Here, you will also find a bronze statue of the Emperor Marcus Aurelius on horseback.

In the Villa Borghese, start with a visit to the Galleria Borghese. A twenty dollar admission fee and a prior reservation (required) restricts the size of the crowds in this lovely museum,

where you’ll find paintings by Titian, Rubens and Raphael, along with a collection of marvelous sculptures. The Villa Borghese’s physical and cultural endowments are overwhelming. The Borghese family amassed one of the greatest family fortunes and art collections ever assembled. The Villa Borghese was built to display the great art pieces owned by the family, and Napolean used a part of the collection to form the cornerstone of the Louvre’s own portfolio.

On the west side of the Tevere is Vatican City. See St. Peter’s Basilica on any day other than Saturday and Sunday and you’ll avoid the crowds that line up on the weekends to hear the pope (if you’d like to see the pope yourself, then line up early). Tradition tells us that Peter was buried here in 64 A.D. near the place of his crucifixion. Constantine, the Roman emperor that made Christianity the official religion of the Empire, commissioned the basilica to be built over Peter’s tomb. The present basilica was completed during the late 16 th century. Inside the massive church are the works of the great masters and many holy relics, including a piece of the Cross. Tombs tours of past popes lying in the church can be arranged in advance at the Ufficio Scavi. Note that you must abide by a very strict dress code: no shorts or bare upper arms.

If you want a great view of the city, take a taxi or a nice stroll to Piazzale Garibaldi, or the Janiculum Hill, where a cannon goes off every day at noon. The skyline here is magnificent, and you’ll discover an idyllic view of practically all of Rome’s monuments. Walk along the road to the Fontanone and then down the staircase into Trastevere. You will not be disappointed.

The Trevi Fountain is a center of tourist adoration, but if you go to see it late at night or very early morning, you will better understand its attraction. The crowds have largely vanished and the lights on the water give the fountain a pleasant glow. The Fontana di Trevi dominates the small Trevi square located in the Quirinale district. The water for the fountain is the product of the Aqua Virgo, an aqueduct constructed in 19 BC. It brings water all the way from the Salone Springs, where legend has it that a virgin maiden showed soldiers where to find the water’s source. The central figure of the fountain, in front of a large niche, is Neptune, god of the sea. He is riding a chariot in the shape of a shell, pulled by two sea horses. One of the horses is calm, the other one agitated, symbolizing the moods of the oceans.

If you catch the famous Pantheon early in the morning, before 10:00, you will miss the morning rush that starts around 10:30. The Pantheon is the best preserved of the ancient Roman buildings. Its dome is more than 130 feet high and at the top is a large opening, the oculus, which is the only source of light. Built in honor of “all gods”, the structure has survived largely intact.

Remember that much to see and do in Rome is always free – totally without charge. Here are just a few examples:

Note, too, that the exterior of many of the monuments such as the Colosseum and Castel Sant’Angelo are free to visit, even though there is a charge, and well worth it, for the interiors. Churches, their paintings, vaults and relics are typically free as well.

Legend has it that if you throw a coin into the Trevi fountain, you will return to Rome. It’s a good place to deposit your spare change in any case, so give it a toss. If you have visited everything on this short list of favorites, you’ll still find much more to do in the Eternal City.