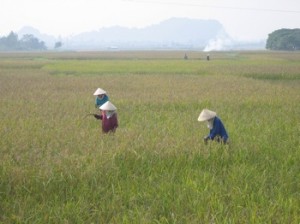 It’s always the weird sights that grab my attention on holiday.

While other tourists are admiring a gaudy temple in Ho Chi Mihn City, I’m fascinated by a frog.

He’s supposed to be compliantly waiting for death in a metal bowl in a pavement market. But this is Adventure Frog. He suddenly springs clean out of the bowl and starts hopping for freedom down the street. The stallholder leaps up and gives chase, plonking him straight back in jail.

The frog waits a moment before an even mightier leap, and is hotly pursued again. I could have watched the game for hours, except someone decided the feisty frog would make a tasty supper, and his time was up. 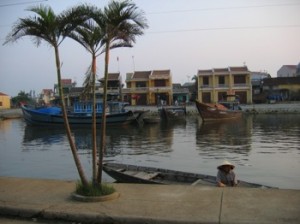 Applying my sympathies to a frog was probably a defensive mechanism to ease the sadness of the previous day, spent on Vietnam’s battlefields. The Viet Cong dug a warren of tunnels covering 250km to hide themselves and their weapons from Americans who strafed the land during the Vietnam War.

Entrances to the Cu Chi tunnels are so well concealed that we walked right past, until our guide brushed away some soil. I wriggled inside and slithered along the narrow passageways, smiling at their ingenuity. But a display of the murderous traps laid to wound pursuing soldiers quickly kills any levity.  Then you visit the War Remnants Museum and the horror of human brutality is even more apparent. News reports filed by war correspondents show photos of injured soldiers and burned civilians. You’re chilled already, but you shiver to read this picture was the photographer’s last, before a bullet took his life a moment later. 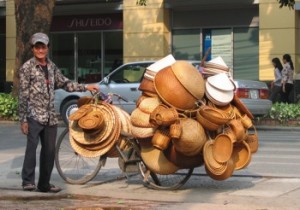 The Vietnam War is one piece of this country’s history you can’t ignore. But the land has been conquered, divided and reunified so many times that it’s easier to ignore the rest of its convoluted past and just enjoy the resulting cultural melee. Skinny little Vietnam stretches for 1,800km and at one stage narrows to just 50km wide. Some areas still seem cut off from the modern world entirely, with villages where life has been unchanged for centuries, except for the arrival of TV and tourists. The scenery lulls you into a sense of serenity as you watch oxen pulling ploughs and women with pointy hats working in the rice paddies.

Ho Chi Min City is a dreadfully dour name for the beautiful place once called Saigon, and many locals still call it by its more romantic name. Saigon is an elegant city of glorious old French buildings, delicious patisseries and women clad in traditional ao dais pedalling genteelly on their bicycles.

There’s an ornate theatre too, and I took two companions to enjoy a ballet set to the highlights of Tchaikovsky. Three western women arriving by cyclos and taking their seats amidst the locals seemed to be as much of a spectacle as the dancers. 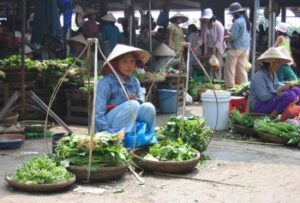 Hanoi is a far brasher, faster place with little sense of style. The roads are so chaotic that I got myself adopted by the baby-faced tourist police. I don’t know if they’re supposed to protect tourists, or to make sure we behave ourselves, but I reckoned they could start by helping me across the road. Yes, it made me feel like a helpless geriatric, but faced with the onslaught of a thousand bicycles and scooters all hurtling towards me at different speeds, I was behaving like a helpless geriatric.

Many scooters have three or four people wedged on. Another ambitiously had four dead pigs tied on the back. One day the Vietnamese may decide there’s a limit to what can be carried on a motorbike – and pigs might fly. 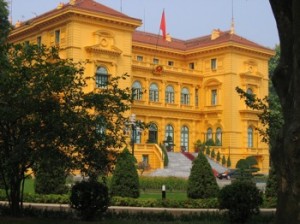 The tomb of Ho Chi Mihn must be the most austere building in the country. It’s a utilitarian concrete lump where the only splashes of colour are the red and white hats of the armed guards. We walk over to a spartan wooden stilt house on a lake, where the founding father of the socialist republic apparently lived and worked. “He was a simple man,” our guide says. Which leaves me perplexed by the beautifully ornate yellow presidential palace. You mean Ho Chi Mihn preferred to stay in a cold, damp and probably mosquito-infested stilt house, rather than occupy the luxurious palace round the corner? Ok, if you say so….

Within striking distance of Hanoi is one of Vietnam’s highlights,  stunning Halong Bay where 3,000 bizarre limestone formations jut out of the calm sea.  Tourists climb into small boats and about a dozen depart simultaneously, making you fear the  atmosphere will be destroyed by playing dodgems. But the bay is so vast that we lose each other quickly, and drift through an ethereal mist that bestows a magical, mystical quality and makes everyone speak in reverential whispers. 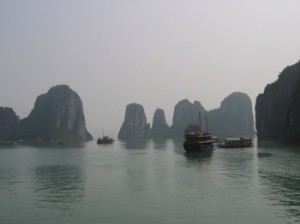 We dive overboard to swim in the warm water, then climb back on board for a lunch of ultra-fresh seafood, served with the inevitable rice and noodles. Vietnam’s food is a pleasure, and the descriptions are equally delightful. My favourite menu offered “noodles fried with miscellaneous”, although I skipped it after remembering my friend Adventure Frog.

Vietnam is big on boats because it has a disproportionally long shoreline compared to its landmass. On another boat trip a masseuse was pummelling us on the central table, and when she finished a buffet was served on the same table. I guess it’s all meat of one kind of another.

One worthwhile inland diversion is Da Lat, reached by labouring up steep mountain roads where graphic warning signs show a car hurtling off the edge of the cliff. The cool air makes it a popular retreat in the stifling summer, but it’s a town of simple pleasures, like exploring waterfalls or riding a cable car above the lush scenery. Da Lat has an enormous indoor market too, and after admiring colourful but unknown edibles, I ordered that classic combination of wine and ice cream at a nearby café. 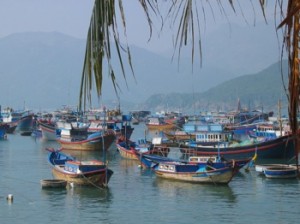 That evening our guide took us to a “minority village” where the hill tribes live, to buy hand-woven shirts and meet the village elder. We walked into his circular straw hut in the gloom, until he remembered to switch the lights on. At least it’s not so remote that it lacks electricity, but he had us fooled for a moment.

We chatted in a tri-lingual mishmash of French, English and the local dialect. Then he brought out an earthenware pot full of a strangely murky brew. Rice wine, village style, with some clear plastic tubes to drink it through. The straws are see-through so he can make sure the tourists are actually drinking it, he chuckles. We drink, and the pungent brew somehow makes our tri-lingual conversation across totally alien cultures much more comprehensible.