Antarctica – Voyage to the end of the world

“Out of whose womb came the ice? And the hoary frost of Heaven, who hath gathered it? The waters are hid as with a stone, and the face of the deep is frozen.” – Job 38:29

It is a land with little soil, where 96% of its mass is covered in ice, with no indigenous people, no indigenous government. No economic activity exists, except for that in small isolated encampments of scientists and from the incursion of tourism to the island continent.

Antarctica is a land of many superlatives. It is the driest place on earth, it is the coldest. Its land mass forms the largest desert on the planet. Its average precipitation is the lowest anywhere, and its mean elevation the highest of any other continent. It is the southernmost continent, its 14 million square miles almost entirely contained within the Antarctic circle, 620 miles south of the coast of South America. It is the windiest place on earth, the most remote. It has no time zone, since all time zones converge in its interior. There are no non-indigenous animals – no dogs, cats or other pets – as a matter of treaty. Over the continent, an atmospheric anomaly – a giant hole in the earth’s ozone layer.

The name Antarctica is derived from the Greek word antarktikos meaning “opposite to the Arctic.” In 1959, a group of twelve countries devised the Antarctic Treaty – that document, now signed by forty-five countries, prohibits activities of a military nature or any commercial mining operations. Seven nations claim territories ( UK, Norway, Chile, France, Australia, Argentina and New Zealand) and two others, (the United States and Russia) have reserved the right to do so. The Antarctic treaty neither recognizes nor contests those claims. Today, more than more than 4,500 scientists work there conducting research not possible anywhere else. The population tends to be seasonal, increasing to over 33,000 in its summer. In 2006, more than 28,000 tourists visited, carried there by the approximately 25 ships that have regular routes through the region. 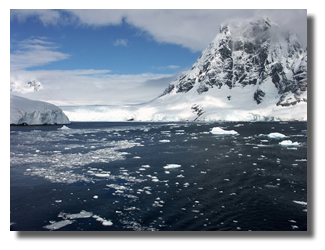 Antarctica is the fifth largest continent, larger than both Australia and Europe. The Transantarctic Mountains split the continent in half. The ice pack averages a thickness of over one mile. Nearly 85% of the world’s ice and 75% of the world’s fresh water is frozen here – if it were to melt, ocean levels would rise approximately 200 feet; the Antarctic Peninsula has experienced an accelerated warming over the past 50 year of almost 5 degrees Fahrenheit, causing icepack and glacier melt and the appearance of plant life where none was previously recorded. Every visit to the continent will reflect its changing environment.

At one time, Antarctica was much further north. Fossils of trees, plant life and dinosaurs have been found, and large deposits of low-grade coal are present. Additionally, scientists have discovered more meteorites in concentration there than in any location in the world, many of which originated on Mars and have given tantalizing hints of life elsewhere in the solar system.

Most visits from travelers occur during the Antarctic summer from November to March, when there is typically 20 or more hours of sunlight each day. Sunglasses, hats and sunscreen are a must as more solar radiation hits the earth here than anywhere else – due to both the length of the day and the invisible, infamous hole in the ozone layer. During the summer, the coastal zone ice melts, making incursion by ice-hardened tourist vessels possible. The scenery is comprised of every shade of purple, blue, white and golden reflections against the water, which is filled with enormous icebergs. Winter visits by tourist ships are nearly impossible due to the shifting ice flows that can encapsulate a ship very quickly, stranding it in the pack ice that extends for more than 600 miles around the continent in the near total dark of the southern winter. 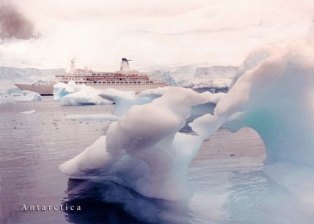 Antarctica is far from the lifeless void many perceive it to be. Summer is the mating season for penguins and the many species of seabirds. Fur seals and elephant seals breed here, and more than 200 species of lichens grow. The long days create spectacular lighting conditions for photography as the penguin chicks begin to hatch and the rookeries become a maddening cacophony of noise. As late summer approaches humpback, orca and minke whale are a common site. Antarctic expeditions offer some of the most unique and esteemed photography and wildlife viewing opportunities.

Most leisure expeditions to Antarctica originate in Ushuaia in Argentina or other South American ports in the Western hemisphere and either Hobart or Christchurch in the Eastern Hemisphere.

Interestingly, visiting requires no visas or other travel documents beyond the trip’s point of origin. It does, however require an eagerness for adventure, time (most journeys are fifteen days or more) and a budget within a wide range of $4,000 to $50,000, depending on the itinerary, tour company and ship accommodations. 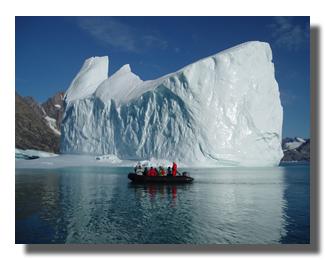 Ships that visit range in size from small 20 person vessels to larger 900+ passenger cruise ships. Companies that bring tourists are almost uniformly conscientious of the ecological systems and maintain a rigorous respect for the environment. Visitors are inevitably accompanied by experienced naturalists that watch over both travelers and wildlife, ensuring that each keeps its appropriate distance from the other. Many such tour operators belong to an organization known as the International Association of Antarctic Tour Operators (IAATO) that voluntarily restricts the number of persons who may land at any one time.

Inflatable boats known as Zodiacs provide much of the transportation for sightseeing as they shuttle from the ships, filled with travelers. Trips out in a Zodiac can be invigorating, rigorous and on most ships, completely optional for passengers. A few ships have on-board helicopters, allowing for visits to the interior. Biologists, ornithologists and experts in oceanography accompany many, if not all of the trips to enlighten and engage the passengers. Itineraries are well planned – and subject to change. Glaciers calving into the water, animal sightings, moving ice-flows, wind and water all conspire to keep everyone flexible and excited.

Because of the small number of tours operating in Antarctica, the short length of the tourist season, and the capacity

limitations of the IAATO, it is best for travelers to plan well in advance of their visit, as available space goes quickly. Working with an established tour operator and a solid travel consultant on your Antarctic adventure ensures the trip of a lifetime and an experience reserved for the lucky few.

antarctica cruises
Previous ArticleDo You Know Your Civil War History?
Next Article Camping Vacations – How to have a great time out of doors
Richard B. Earls