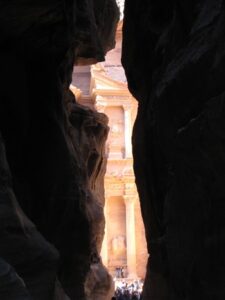 A million words of poetry and prose have been penned to describe the wonders of Petra, the ancient city that lay forgotten for centuries beyond a secret mountain gorge.

Artists and photographers strive to capture the mystical beauty of this pink-tinged city carved into desert sandstone. Every guidebook to Jordan bristles with views of Petra’s magnificent monuments, now considered one of the seven modern Wonders of the World. Heck, even Indiana Jones swung through the city on his Last Crusade. So I’ve seen the place a thousand times before I get anywhere near.

Excitement bubbles as we drive through Wadi Musa, a desert town so relentlessly drab that it seems designed to magnify the glories we’re about to see. Then I’m handed a ticket in a car park crammed with tacky souvenir stalls and ominously packed full of tourists. We set off down a path listening to simultaneous commentaries from guides in French, German, Japanese and English. As the path leads towards a narrow opening in the mountains I pause to take a photo, but too many people get in the way. So I enter the stone passageway scowling and fall into step with dozens of other sightseers. 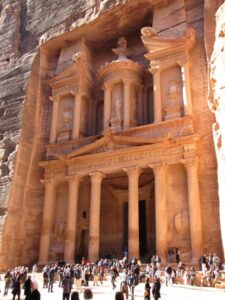 Then I look up and realise the cliffs have closed above me, and I’m dwarfed by the deep, skinny gorge. I start to admire the pink and reddish rocks, and notice how the blocked-out sun illuminates some stones with a magical shaft of light.

There’s a solitary scrappy tree clinging to the rocks with not a grain of soil in sight. I take a photo, and realise the crowds have thinned a little. By pausing for a moment I’ve become the straggler, and for a glorious moment I’m all alone in this mighty rock ravine.

Then I round a bend and bump into the crowd again as everyone strains for their first glimpse of Petra’s most famous monument, the Treasury. I take my turn to gaze up through a gap in the rocks, and see a carved pink angel floating ethereally.

Now I’m so close that I involuntarily slow down because I just know it’s going to be an anticlimax. Petra can’t possibly live up to your expectations after seeing so many pictures. And yet it does – it’s astonishing.

As you emerge from the gorge you gawp open-mouthed at the Treasury directly in front. It stands two stories high, with perfectly carved columns and ornate statues turning rough rock into a magnificent work of art. 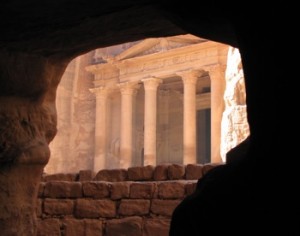 Exploring the amazing Treasury doesn’t take long, because it’s literally a façade in front of a plain square chamber. Why, I wonder? Why did the ancient Nabateans spend so long carving this stunning façade that goes nowhere?

To the right the path leads further into the city: temples, tombs, colonnaded streets and amphitheatres hewn out of rock beckon me on. The most far-flung monument is reached by a 40-minute walk up a fairly steep mountainside. One unfit companion dithers about attempting the climb, and tells us not to wait. That was just a clever ploy to hang back and hire a donkey, and soon she comes trotting past with a huge grin on her face. I take her photo but drop my lens cap, and it splats to an inelegant stop in a heap of steaming donkey dung.

Thankfully it’s winter and not too hot, but we’re still breaking a sweat when we reach the flat top of the mountain. Dominating this High Place of Sacrifice is another exquisite temple carved from rock, with only a small, plain chamber beyond its entrance. 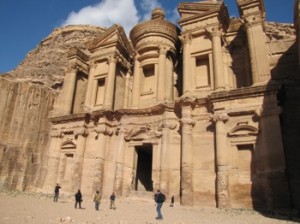 Looking down on Petra highlights its tremendous size, and a local expert tells me that perhaps only a quarter has been uncovered, with the rest still buried under centuries of shifting sands. In the first century an estimated 30,000 people lived here, but a change in trade routes started its slow decline, and the last inhabitants probably fled after an earthquake in 749 AD.

Another attraction in Jordan is the Dead Sea, although the viscous murky water is far from attractive. But there’s nothing for it except to brave the chill and wade in. I expected the buoyancy to pop me up like a cork, but I just kept wading in deeper with my feet firmly on the ground. So I lifted my feet, lay back, and did the classic Dead Sea duck impression. Then you wade out again and plaster yourself in the Dead Sea’s most famous export: thick black mud that’s supposed to leave you feeling all young and zingy. 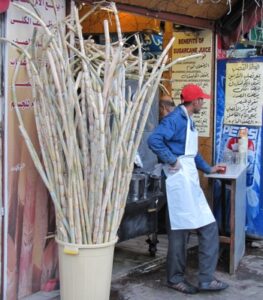 I’d felt quite young and zingy a few days earlier when I jumped on a bus in Amman, the capital, using my shaky Arabic to figure out the bus route to the city centre. It’s a doddle really, as Amman has one central road that culminates in the old downtown area. The Jordanians are so welcoming that an elderly teacher adopted me on the bus, setting me off at the Roman amphitheatre. Amman is a modern city with a few scattered remnants of the past, including an ancient citadel that looks out over the narrow winding streets in the old town.

I strolled along, surrounded by music blaring out of every shop, no matter whether it was selling fruit, clothes, bags, shoes, toys or mirrors. Each shop was tuned to a different radio station, adding noise to the general hustle and bustle. The smell of a bakery lured me in and I watched people buying hot pita breads by the kilo. I wanted one pita, not one kilo, and the shopkeeper handed it to me with a smile and shrugged away my coins.

Jordan is beautiful in a stark, bleak, desert kind of way. It’s a cultural exploration rather than a fun in the sun destination. And the enduring memory will always be when you emerge from a narrow passage in the rocks to be awed by Petra’s glorious Treasury.