Rollin’ on the River: An Intimate Guide to the Nile 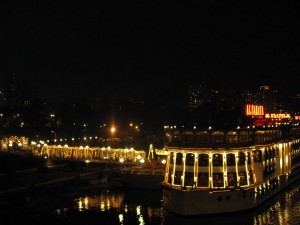 In Arabic, Egypt is sometimes called Umm Al-Duniya, or the mother of the world. The Nile River, which waters the country, could give it some stiff competition for that title. Considered the world’s longest river, the Nile’s waters have fostered human civilization for thousands of years. No country knows that better than Egypt: The nation’s survival depends on the river, and has since the time of the Pharaohs. While the Nile is a reference point and a backdrop to any Egyptian adventure, there are a host of inventive ways to take a self-guided tour of the iconic waterway.

Start in central Cairo at the Qasr El-Nil bridge. Capped on each side by twin bronze lions, the bridge pierces the heart of Cairo’s Tahrir (or Liberation) Square. Sauntering along its length is a fantastic way to experience the Nile’s flow, and Cairo’s as well. Chaste couples while away the afternoon and evening on the bridge, taking in views of the river, while locals and tourists alike snap photos of the city and the iconic opera house on neighboring Zamalek island. The bridge is also part of Egypt’s recent revolutionary history: The mass uprising that overthrew dictator Hosni Mubarak in the beginning of 2011 fought a daylong battle with security forces for control of the bridge and the square beyond. Go at sunset for the best views and watch the city come alive at nightfall.

As you scan the city, you’ll likely see, or hear, your next activity. In Cairo and other riverside Egyptian cities, feluccas have been plying the Nile since antiquity. The small boats, either motorized or sail-powered, hire out their services on an hourly basis to parties of locals and travelers. They’re a great way to see the open water on a budget: With enough pluck, you can net an hour’s ride for a flat rate of 30 to 50 Egyptian pounds (about six to 10 U.S. dollars).

Groups are encouraged, even those with a taste for beer and wine. So grab your friends and a few bottles for an unforgettable Nile cruise on the cheap. If you’re not a fan of high-decibel Arabic pop music, request one of the more peaceful sailboats. Unless you’re ready for a party, the motorized, neon-lit alternatives will be more than you bargained for. 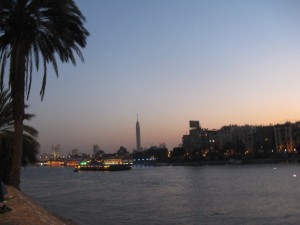 When night falls, your next stop is the Nile Zamalek Hotel. Located on the east bank of Zamalek, Cairo’s island neighborhood, this prime scenic spot isn’t much to look at initially. The Nile Zamalek is ramshackle to the max, and if you’re looking for rooms, look elsewhere. But what the hotel lacks in looks, it makes up for in view: The hotel’s rooftop bar has a spacious balcony that provides one of the best bird’s-eye views of the river, the water traffic and the city itself. The beer’s cheaper than at the major hotels, they offer hookah pipes (water pipes used to smoke flavored tobacco) to eager smokers and are open late: All of which makes up for the lackluster service. And while you’re waiting, the view is breathtaking.

At the end of your trip, spring for a little luxury by hitting the fusion restaurant Sequoia in Zamalek. Featuring a healthy mix of Middle Eastern food and continental cuisine, Sequoia is the place to see and be seen in Cairo. And we’re not just talking about the local celebrities that frequent the place. Sequoia features a massive outdoor deck so close to the Nile, you’ll want to buy a boat yourself. The leisurely pace of Egyptian dining suits the place well: You won’t get tired of sipping wine and watching the Nile’s eddies lap right up to the edge of your table. Watch the sunset, smoke a hookah and consider that, for thousands of years, civilizations have been doing the exact same thing … just not in nearly as much style.

Michael Kaput is a freelance writer and editor based in PIttsburgh, PA. He has served as an editor at Egypt's top two English-language magazines and helped companies like Boston Consulting Group get out their message. Now, he writes for the web. You can contact him at michaelkaput@gmail.com.