The call to prayer slices through the breaking horizon with a single elongated chord. Berbers rise from their beds and take to their dust worn prayer mats where their day of devotion once again begins. The incense is lit, releasing streams of white smoke; the smell of religion hangs like a plump cloud. Slowly the market comes to life as the vendors, their white jallaba robes stained red from the earth, haggle over their colourful palate of spices; crimson, canary, and ginger powders. The earth is still cool from the night’s blanket, but the steady buzz of the city will have the streets warm in no time. 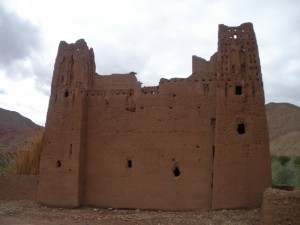 Morocco, the apple of every exotic culture seeking traveler’s eye, has become a growing attraction for all sorts of globetrotters. This labyrinth of colors, smells, and tastes will make you feel as if you’ve entered a whole new world. Morocco is described by the West as a third-world country, a jaw-dropping experience, but with tourism ranked as one of its staples, the country’s found itself progressing rapidly.

The congestion of keyed up tourists centralizes around cities like Fez, the capital, and Marrakech where the locals have drawn on the increasing industry. This poses a problem for many of you who trek halfway across the world in want of an authentic experience, one where you feel you’ve really begun to understand the culture and don’t feel cheated by the typical smoke and mirrors charade.

Do yourself a favour and escape the congested streets of the city to a state of reverie deep within the heart of Morocco. Taking to the Dadès Gorge is a great way to experience Moroccan culture up close and personal without getting lost in a tourist maze. Seize the opportunity to transport yourself into a different dimension; one complete with squat toilets, mud brick houses, and donkey drawn carts. 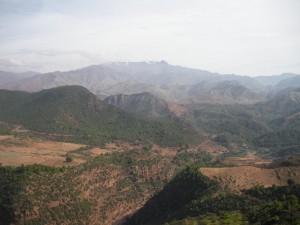 Just North East of Ouarzazate, the Dadès Gorge sits virtually untouched and full to the brim with culture and history. Strewn along the gorge’s basin is a series of self-sustaining villages. Here in these villages, lives the semi-nomadic Berbers of the Atlas Mountains. Referred to as the “free people,” these tribes date back to the Neolithic period and have kept their culture afloat during Arab and French influence through music, dance, and art. While the men follow their grazing livestock, the women craft one of a kind textile pieces to sell in the village.

Recognized within the international community as a symbol for Moroccan culture, the Berber carpets are an art form passed down from generation to generation. A motif woven by a Berber woman tells the story of her tribe, her life, and her future. These rugs play an important role in marriage preparations as the intricate embroidery and knotting demonstrates the skill of the weaver. The carpets themselves are coloured from natural dyes derived from dried figs, pomegranate, roots, tea, and various other plants and herbs. To see a Berber carpet being woven is witnessing centuries of history unravel before your very eyes.

While in the Gorge, treat yourself to a unique Moroccan culinary experience. Spoil your taste buds with a traditional dish; tajine, made of fresh vegetables simmered in a thick clay pot in a paste of various spices. Sip traditional Moroccan sweet mint tea at a local cafe, or take a stroll through the market sampling some of the country’s ripest produce.

Basing yourself in the Dadès Gorge provides an excellent opportunity for exploring more of the country. If bumping along on a camel at half speed through the rolling sand hills of the Sahara’s made it to your bucket list, a good old fashion desert tour is right up your alley. Visit the Dunes of Merzouga for surreal golden sandbanks or test your vision with the mirage-like landscape of the Oasis of Fint. 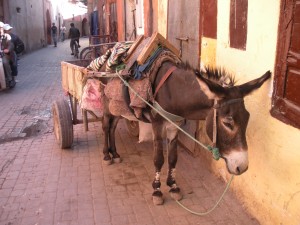 For a one-on-one with the valley, rent a bike from one of the villages’ tour offices and pedal your way across lunar landscapes. As you coast along the winding road, kicking up clouds of ruby dust, make sure to take in sights such as the “Monkey Fingers,” crumbling Kasbahs, and the majestic beauty of the Atlas Mountains.

Morocco, like its people, lures with a magnetic pull that entices the senses and stimulates the soul. It’s not for everyone, but if it is for you, be sure to brace yourself because this whirlwind isn’t taking any prisoners.