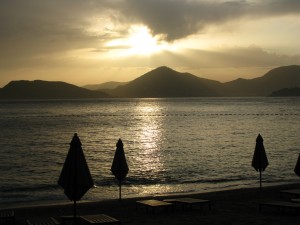 Monte-what? Referred to time and time again as the “Black Mountain,” Montenegro is a tick-tack sized country squeezed smack dab in the middle of the Adriatic bordering states. Just a thumbtack on the map of Europe, but full to the brim with exquisite landscapes, Montenegro leaves you wondering how this tall drink of water is often overlooked when discussing Europe’s Fave Five.

First mentioned in the 9th century as a Byzantine vassal, the country has spent its entire existence shuffling from one umbrella’d wing to another. But Montenegro managed to remain unsullied goods through times of war and bloodshed, plague, and decimating earthquakes. In 2006 it was granted independence from Serbia, becoming the Republic of Montenegro. But because of this shared dominance between the Balkan states throughout history, Montenegro has grown into the flourishing multi-cultural haven we know and love today.

But let’s fast forward to what you’ve all been waiting for; coastal Montenegro. It’s characterized by its rocky beaches and unparalleled sapphire waters, warm and sub-tropical climate, and tiny shore hugging villages. The Bay of Kotor, named one of the world’s most beautiful bays, is agreeably one of the country’s most cherished jewels. As the dwelling place for Montenegro’s most squandered and romantic treasures, the Kotor Bay dazzles the eye and captures the soul of the Montenegrin people. Confused with being a fjord, this naturally submerged river canyon looks as though it was hollowed out with a deep spoon, filled with dripping emerald waters, and then sealed together by a U-shaped wall of shrub covered mountains.

Kept polished and pristine, the Bay of Kotor is home to the picturesque towns of Risan, Persast, and Kotor. A UNESCO recognized heritage site, Kotor remains the highlight of any trip to the Bay. Settled in 168 BC by ancient Romans, it was ultimately chosen due to its advantageous military position along the coast in protecting the Montenegrin people from pirates and other invaders. 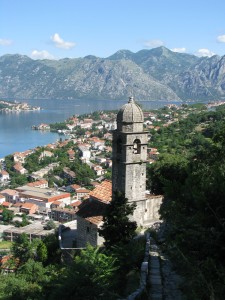 Built into the face of the treacherous cliffs that surround the city is St.John’s fortress. Having seen many a day, the strong hold is a compilation of Kotor’s history, but its Byzantine influence is undeniable. The city walls that surround the Old Town were built in the 14th century by the Republic of Venice and much of Kotor’s architecture depicts a Venetian influence.

Within the city walls is the St. Tryphon Cathedral, rebuilt in 1124, which harbours a unique collection of important relics and artifacts that tell the all too enticing story of the city’s history. But let’s not shy away from Kotor’s involvement in the arts. Playing host to various Montenegrin festivals and celebrations each year, Kotor’s managed to captivate artists from around Europe and give fuel to the fire by providing continuous inspiration.

Although the city of Kotor has experienced an influx of tourists, it has yet to be purged of its elegant and somewhat smouldering charm. Sophisticated bars and cafes string along the criss-crossing paths of the city’s Old Town and dip into the coastline that runs outside the city’s walls. Past the souvenir vendors and gelati windows lies the glistening calm water of the Bay that, for some reason or another, you won’t be able to take your eyes off of.

Crna Gora, monte nero, the Black Mountain, Mali i Zi, Montenegro; known in a thousand different tongues and dialects, but remembered just the same. This golden nugget of a country with its illustriously narrow coastal strip paralleled by dark, dramatic mountain peaks is sure to stir the curiosity and passion of even the most bashful of crowds.