Hidden in the Baztan Valley near the southwestern French border and a few miles away from the pristine shores of the Bay of Biscay, sits a little village with a big secret. Removed from the bustle of the Basque Country’s San Sebastian and the glitz of Biarritz, Zugarramurdi is a tranquil town where not too much has happened in the last four-hundred years.

This lush area of Navarra is an ideal blend of French, Spanish and Basque culture, and this mix is especially evident in the local architecture. Painted clean white and adorned with red wooden shutters, bountiful flowerpots filled with pansies and geraniums spill from all the windows along Zugarramurdi’s streets.  As I drove from Ainhoa, to Sare to Zugarramurdi, I admired the picture-perfect countryside. There were fluffy sheep in the greenest grass on bulbous hills and manicured, yet unpretentious, farmhouses around every bend. It is easy to see why the Spanish say this region and the Baztan Valley in general, is enchanted. 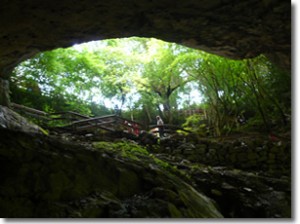 I am not the first, nor will I be the last to become spellbound by Zugarramurdi. For hundreds of years the town was home to witches and warlocks who used its natural caves as their meeting point for magical rituals. Up until 1610, the Witch Caves of Zugarramurdi were a happening place and upon touring the caves it is easy to see why yesterday’s witches chose Zugarramurdi to hold their covens. More like a tunnel than a cave, Zugarramurdi’s Witch Cave is enormous; 40 feet high and 394 feet across at its widest. A stream, aptly named Hell’s River, runs through the cave and around it into the village, adding to the cave’s aesthetic beauty.

Zugarramurdi’s Witch Cave is surrounded by thick forest replete with cherry trees, wild strawberries and purple figs which hung like weird decorations from slender limbs. Those who visit the cave are given a map of the area and take a self-guided tour through the cave and the woods encompassing it. Markers show where magic ceremonies were held, and point out medicinal plants along the way.

Everything was going swimmingly for the village folk of Zugarramurdi until the beginning of the 17th century when Don Juan del Valle Alvarado and the Spanish Inquisition was called to town. During his stay in Zugarramurdi, Valle Alvarado found witches and warlocks doing the craziest things, such as casting spells on crops, people and animals, shape shifting, being vampires, causing storms and creating shipwrecks, and basically worshipping satan as their god…

By November 7th of 1610, three-hundred citizens had been accused of witchcraft. Of these, forty were taken to Logrono to stand trial. Once in Logrono, the Spanish Inquisition acquitted eighteen of them, burned eleven at the stake, and handed the rest sentences such as life in prison, torture and hefty fines. Looking around Zugarramurdi and the fertile land it rest on, it crossed my mind that if I was a jealous neighbor or despicable individual trying to increase my land holdings, crying witch might just have been the ticket back then.

Old traditions die hard in Spain. Inquisition or not, Zugarramurdi continues its magical practices and has protected its haunted history. While in Zugarramurdi last June, I happen to visit the Witch Caves and village on the Summer Solstice. Clearly, I should have realized that the Summer Solstice, that is, the 21st of June, would be a special day in these pagan parts. The holiday of sorts had slipped my mind, and so I was surprised and delighted to come upon Zugarramurdi in full celebratory mode when I arrived early Saturday morning.

The village looked much like the set for a Harry Potter movie. There was a royal purple tent filled with messenger owls sitting on scraggly perches, there were women dressed in tied-up bodices and fabulous hats, Medieval 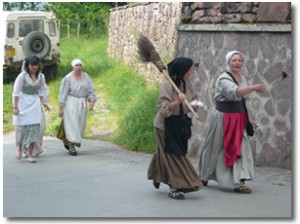 games were set up in the streets for kids, psychics waited at folding tables selling the future, and naturopaths sold herbs and oils to cure coughs and break spells. Throughout the day presentations on natural remedies and the history of witchcraft were given in the town’s center square (in Spanish), and in the evenings concerts were held inside the echoing Zugarramurdi Witch Cave.

Wanting to take part in the paranormal offerings put on by the festival, I bought some artisan bread and then decided to have my palm read. Palm reading is common in Spain, as is tarot card reading and talk of the occult. For a country that was die-hard Catholic for so long, it is sometimes surprising to see such reverence for pagan traditions. I waited my turn, (there was a line to see the palm reader) and then was finally seated across from my fortune teller, a man in his fifties wearing an orange kaftan.

Besides many other juicy tidbits, my kaftan man told me that I would soon mary a ninja, learn Russian, and become pregnant. He said my future child would do great things, and that a relative of mine was Jesse James in a past life. He read my palm dutifully, sometimes going into a sort of trance, and sometimes being interrupted by customers who wanted to buy a crystal from him, (his side business). At the end of our session he charged me more than it said on his sign, and when I protested he gave me a talisman. Not wanting to invoke some sort of hoodoo, I took my talisman and decided to check out Zugarramurdi’s Witch Museum.

Located in Zugarramurdi’s old hospital, the Witch Museum (Museo de las Brujas) was opened in 2007. It makes a nice stopping off point on the way back from the Witch Caves and attempts to show the true history of the witches of Zugarramurdi. The museum also looks at the Spanish Inquisition in the Basque Country and Navarra in detail.

For such a tiny village, there’s much to see in Zugarramurdi, and its tale and Solstice festival kept me entertained most of the day. I left the village as the sun was setting and drove through the quiet hills back to Bera, a moss-covered village where I had a hotel room. It began to rain, as is common in this region, and I got to thinking that Zugarramurdi is the definition of that old saying, ‘Small town, Big Infierno’. While all of my travels in Navarra left me enchanted, it was only in Zugarramurdi that I felt a bit bewitched.

P.S. : Six months later, I still haven’t met my future ninja, nor have I learned a word of Russian.