In Greece, the past is always with you. Where ever the traveler looks there is a reminder of not just centuries but thousands of years of history. In some locations, shards of ancient artifacts still lay on the ground like so much rubble, and the ruins of temples and great buildings are so abundant you have the feeling of being in a vast, singular outdoor museum.

From the seaside taverns and restaurants to the wonderful vistas and landscapes of the rugged coastline, Greece offers an astonishing variety of experiences and activities. But this is not a country to rush through in a mad dash to see all there is to see. Greece is best enjoyed slowly, absorbed into the soul like sunlight on grape leafs. The spirit of the place works its way into your psyche and you suddenly understand why so many travelers return again and again to replenish their wanderlust at the birthplace of western civilization. 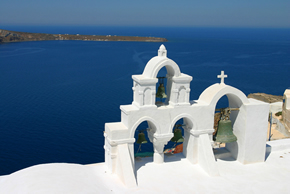 One of the best ways to experience Greece at a leisurely pace is to visit by sea, taking cruises between the islands, hopping from one to the next and taking in the culture, sights and foods of Greece from the vantage point of its surrounding oceans.

As destinations, the Greek islands each have their own persona. No two are alike and some are as different from the others as night is from day. Underneath all of them, however, is their ocean heritage, an agrarian and fishing legacy still visible today. Greece is a land carved by the sea – the nation has one of the longest coastlines in the world. There are over 2000 Greek islands. Of those, only 227 are inhabited, of which only 78 have more than 100 permanent inhabitants. Seventeen of the islands have more than 100 square miles of surface area. Giant Crete is the largest with more than 3,200 square miles of territory, while some of the most famous islands, like Santorini’s Thera has only 28 square miles.

territories and seas surrounding the mainland. The names are all familiar, yet somehow exotic and strange: Cyclades, Dodecanese, Ionian, Sporades, Saronic, and Aegean. All are regions of islands with which the newcomer needs some familiarity to begin to geo-cache their familiarity with the jewels of the Greek island pantheon.

Most guide books group the Greek islands into small clusters that follow the names of the seas around the mainland. The Saronic islands are those situated at a close distance from Athens and its port, Piraeus scattered between Athens and the southern of the Peloponnesian peninsula. The Saronic islands are composed of Angistri, Aegina, Methana, Poros, Salamina, Spetses and Hydra, all laced with small, beautiful beachs and even a few seldom visited islets to visit and explore, most easily reached by small boat from a mother ship offshore. 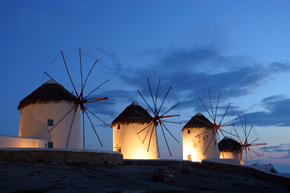 Crete is the largest of the Greek islands. Located in the south of the Aegean Sea, Crete offers mountainous landscapes beautiful beaches and rocky bays, charming villages and harbors where the dining offers up excellent seafood. The Venetian and Turkish merchants and commercial traders heavily influenced the architecture here and is plainly visible in the buildings still standing today.

The Cyclades island group is surrounded by the southern Aegean Sea, south-east of the mainland of Greece. Some 220 islands make up this cluster and include some of one with which North Americans are most familiar: Amorgos, Andros, Folegandros, Ios, Kea, Kythnos, Milos, Mykonos, Naxos, Paros and Antiparos, Santorini, Sifnos, Serifos, Sikinos, Syros, Tinos and others. These islands are mostly the peaks of underwater mountainous terrain. Some, like Thera/Santorini are the vestiges of volcanic explosions. These are islands frequently visited by travelers by cruise ships large and small. The Northern Aegean Islands consists of less familiar names: Chios, Ikaria, Limnos, Lesbos, Samos, Samothraki, and Thassos.

In the southeastern part of the Aegean Sea are the the Dodecanese islands. The Dodecasese islands are made up of twelve major islands and a number of smaller islands: Astypalea, Leros, Lipsi, Nisyros, Kalymnos, Karpathos, Kastellorizo, Kos, Patmos, Rhodes, Tilos. Of the eleven islands of the Sporades group off the eastern shore of mainland Greece, only Skiathos, Skopelos, Alonnisos and Skyros are inhabited. To the west of the mainland in the Adriatic Sea are the Ionian Islands. Here are Corfu, Lefkada, Kefalonia, Zakunthos, Ithaca, Paxoi, Kythira and others. These popular resort islands are known for their wonderful beaches, their quaint villages and relaxed way of life.

But we are only touching on these island gems by name, doing no justice to the warm, friendly waters of the Greek mediteranean. Now it’s your task to seek out an experienced travel consultant to begin serious consideration of tracing back the roots of western civilization and culture to be found in the Greek islands.