Why Less is More on the Balearic Islands

At just eighteen kilometers total from tip to tip, Formentera looks like a boomerang being tossed off the south-eastern coast of Spain. It is nothing more than a croissant crumb on the world map, and though most people have heard of rockin’ Ibiza or artsy Mallorca, Formentera usually draws a ‘Where’s that?’ when mentioned. The answer to that telling question is nowhere. There’s not much going down on the Balearic’s smallest member, which is precisely why it’s worth a visit. 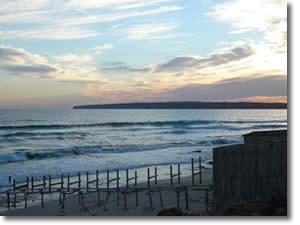 With its midpoint location in the Med., it’s no surprise that the miniscule island has a long history containing profitable glory-days and darker eras too, when it was almost abandoned. Way back when, the island’s salt flats where mined by the Carthaginians and Romans who set up an exportation route between Formentera, Ibiza and Spain’s mainland. More recently Formentera was part of a totally different route, the San Francisco-Formentera-Katmandu hippy-trail of the 1960’s. Nowadays its bike routes call to visitors, filling up in the summer and clearing out in low-season.

The thing about unspoiled paradises is that they are hard to get to; Formentera is no exception. From Spain’s mainland visitors must take a plane or ferry to Ibiza and then catch another ferry over to La Savina, Formentera’s tiny port. At the port there are three bicycle and moto shops set up where you can easily rent a bike for a few days. Then it’s just a matter of strapping on a helmet and heading off to Sant Francesc, Sant Ferran or Es Pujols to find a hotel. Life is simple on the island and everything can be reached by cycle. In a week, the entire island can be thoroughly explored by the avid pedal-pusher, you just have to decide where to start. It doesn’t matter which way you go, because all roads on Formentera lead to something beautiful, something interesting, something worth the ride. 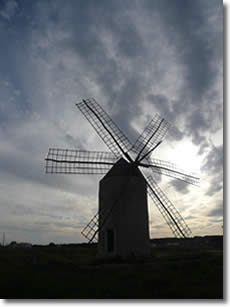 countryside. The highway that runs from one end to the other of the island is sided by ample bike lanes which are well used by Formenterians. Biking on Formentera is a local way of life.

It’s possible to jump on a cycle and explore the island in a free-style manner, but if you’d rather have a bit of information about where you’re pedaling off to, Triangle’s guide is a good one, with a basic list of cycle routes. Imma Planas has been visiting the island since 1976 and has written for Triangle’s Formentera guide; “The difference between Formentera and the other Balearic Islands is its special light and the possibility to get lost on beach trails and in hidden coves despite the island’s small scale.” With Imma’s advice in mind, perhaps a map is best. She added, “My favorite parts of the island are beaches which are inaccessible from main roads, most of which I’ve found by exploring on my own. I won’t tell you their names because that would ruin them.” Fair enough.

For those who want to take it easy or are biking with children, a fairly level ride around the Pudent lagoon, or Estany Pudent, makes an interesting day trip. Clocked at about two and a half hours to ride the loop, the dirt and paved trails take riders along the lagoon’s shoreline. Its waters are calm and serene and on most days reflect the clouds as they make their way across the heavens, or the sun setting in a honey orange and coral color-parade. This is also a good track to spot water birds and admire rural architecture.

La Mola, the island’s only mountain, is the ideal destination for those in search of an extreme experience. It’s up, up, up all the way to the top to the village El Pilar. From here take a load off at restaurant El Mirador and observe the scenery. If the ride didn’t take your breath away, the view from La Mola will. From here Formentera is on display revealing both the of the island’s shorelines at once, a pretty impressive vista.

If mountain biking is your bag, try the old Roman Road, or Camí Romà, which clings to the cliffs and follows a stone path up La Mola. From Es Caló (an isolated sandy-bottom beach where some visitors might like to stay) the trip along the Ramon Road is estimated at an intensive three hours. As you carefully ride along the precipice, check out the Mediterranean Sea and the Island of Ibiza off in the distance. Different from the rest of the island, La Mola is covered in potent pine trees which give off a deliciously heavy scent. 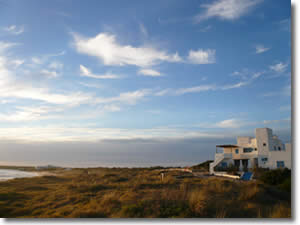 Finally, another route heading to the island’s southern regions takes riders to Cap de Barbaria, along a long, flat track. This level route means less sweat than La Mola but it is still an endurance-demanding ride. The one-lane road to Cap de Barbaria is a straight shot from San Francesc through pastures, small clusters of homes and graceful fig orchards. On Formentera the fig is king and a typical local breakfast consists of cheese, figs and coffee. Arriving at the end of the bike route at lighthouse Cap de Barbaria is like arriving at the end of the earth (which is not entirely untrue, as this is as far south as Formentera goes).

The landscape on this part of the island is dry and the earth is pocked with holes and caves. Beside the lighthouse is the unmarked entrance to a huge cave where the brave can lower themselves down into its hollow belly, and come out on the other side to sit in the sun on the edge of a cliff with the sea splashing below. For anyone who has seen the well-know Spanish film, Lucia y el Sexo (Julio Medem, 2001), Cap de Barbaria is where a large portion of the movie was shot. This route is about five hours riding on a paved road, with very few places to stop for food and drink, so bring lunch.

Air: Vueling and ClickAir have flights to Ibiza, as does Spanair and Iberia.