Twelve Dervish musicians sit hunched over their easels, the hem from their long black capes resting on the floor. In unison they begin to pluck the strings of their wooden instruments and tap the skin of their kettledrums. This marks the beginning of the ancient Sama ceremony. The first monk stands up, shedding his black cloak in a spiritual rebirth before crossing his arms against his chest, representing the number one, an interpretation of God’s unity. With a camel’s hair hat perched atop his head, the first monk begins to rock and then slowly spin round and round. With speed his white skirt fans itself out, shedding all concern and worry for the outside world. He outstretches his arms, his right reaching for the sky, open to God, while the left points to the ground, revealing the Earth’s gifts. He continues to spin until he cannot see the others in the room, until he cannot hear his own voice hum the old Islamic hymn, until he cannot help but feel God’s presence enveloping him in a numbing trance.

The Sama ceremony, or more commonly known as whirling, is but one of many Sufi traditions of the Dervish monks performed to achieve greater religious enlightenment and ecstasy. Originating with the devotees of the Mevlevi order in Turkey in the 12th century, Sufi whirling spread throughout the Middle East, various parts of the Balkans, and along with many other Turkish traditions, prospered in Bosnia and Herzegovina. Just 15km southeast of the city of Mostar, in the resurfacing village of Blagaj, lies a religious phenomenon not many of us are familiar with; Sufism. 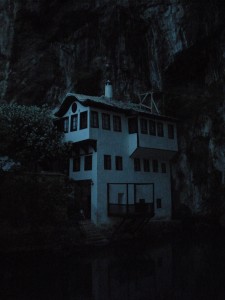 Built in the 16th century under the rule of Mostar Mufti, Tekija, a Dervish monastery, is a symbol of faith for the Sufis, an ascetic sect of Islam. The Dervish order promotes a life dedicated to prayer, Islam, and meditation. A vow of poverty teaches the monks a life of humility through begging which they may never use to subsidize their own needs but must instead give back to the poor in the community as an act of selfless charity. This particular group of devotees also offers religious counselling for people who seek their assistance.

The Tekija, its interior walls adorned with Islamic art and old scriptures, is nestled alongside a 200m high cliff where the Buna River surface in a steady emerald stream. It has been protected by the State since 1952 and is considered an iconic stronghold for the Bosnian people. Beginning at the monastery is a 30-45min heritage trail that tours the ancient Ottoman village, passing by the 17th century Velagic house and a handful of old flour mills powered by the Buna River. After a leisurely stroll through the old village, seat yourself along one the river’s local restaurants and dive head first into the mystical energies that float along the Buna with some local eats. Give your taste buds a whirl with a steaming plate of chevapi, accompanied by a traditional Bosnian beer.

Experiencing a foreign religion requires an open mind. It can be controversial, unnerving, and downright confusing at times. I understand that the Bosnian Dervish monks are of a peculiar breed and a million miles away from ordinary. But half the fun of traveling is packing your curiosity and leaving the comforts of home right where they belong. If you’re able to make that hurdle past the nitty-gritty technicalities, and really submerse yourself in a foreign culture, you won’t be disappointed. With the Persian translation for Dervish meaning “one who opens the doors,” ask yourself, will that be me?

2 thoughts on “Mysticism in Bosnia and Herzegovina”