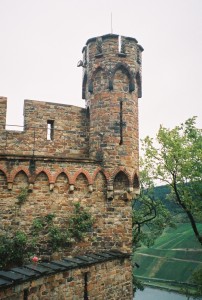 Stone turrets and towers keep an eye on everything in every direction. Vine covered slopes so steep it’s hard to believe people walk between the rows. Narrow villages line the banks of the winding river. You can almost see the damsels with their flowing gowns curtseying to knights in shining armor. Fairy tales…here we come.

Follow the winding Rhine River…either on your own or enjoying a river cruise. There is not a castle, an island, or even a rock along this river without its tale of chivalry or legend. With their locations, they all bear witness to the significance of the Rhine as one of the most important thoroughfares for centuries in Europe. Songs have been composed, operas performed and tales written about these fortresses and their owners.

For a leisurely trip along the Rhine, start at Rudesheim and head north to Koblenz. Picturesque villages with their color washed houses covered in half-timbered facades provide photo opportunities at every bend. Terraced vineyards cling to the steep slate covered slopes.

Check out the Niederwald Monument in Rudesheim. Built in 1877, high above the town, it commemorates the re-establishment of the German Empire. You can access it by road or by cable car. Views of the surrounding vineyards, nearby towns, and Rhine and Nahe Rivers are impressive. 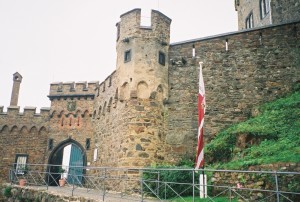 Burg (German for castle) Kloop, an ancient stronghold built by the bishops of Mainz, has been destroyed more than once…most notably by the troops of Louis XIV during the “Orleans War.”  The view and proximity to the river were essential for its collection of river traffic tolls.

Burg Reichenstein, a neo-feudal castle, houses a wonderful collection of arms and hunting trophies. Its perch on a rock spur gives a commanding view of the river. Burg Sooneck is almost completely restored. Tall turrets shadow the flagstone mazes, narrow staircases, and multi-terraced gardens flowing with colorful flowers and plants. The steep path through the lush green forest to the castle from the parking area is worth your effort. And the view of the countryside and river below is breathtaking.

The Isle of Pfalz sits in the middle of the Rhine River. This massive five sided castle-like structure functioned as a toll fortress. The Loreley, a legendary spur jutting out from the cliffs, has become the symbol of the Romantic Rhine and has a special place in German literature. An impressive rock, it obstructs and narrows the river. As the legends tell, sailors all knew about The Loreley and what she could do to unsuspecting ships.

A little further, Burg Katz and Burg Maus were built by competing families. Supposedly Burg Katz was built to neutralize Burg Maus. Since Burg Katz is considerably larger with more imposing towers, it’s easy to believe this tale. Legends abound and many tales have been written about the Cat and the Mouse. 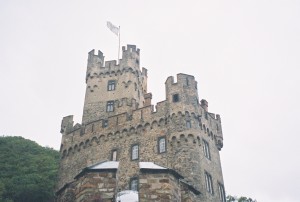 Heading north, Burg Rheinfels at St. Goarshausen was the most powerful fortress in the whole Rhine valley, until falling to the French in 1797. Climb up 200 steps to the top of the clock tower to get an overall view of the turbulent Rhine, The Loreley, Burg Katz, Burg Maus and the steep wooded river banks. Notice the maze of towers, gates, courts, and casemates comprising this awesome complex.

Ruins of two fortresses perched atop the hill slopes are home to yet another legend…that of Rival Brothers Liebenstein and Sterrenberg. Since both brothers loved the same woman and only one could marry her, Heinrich became a knight of the Christian world. Konrad married the lovely Hildegard. As with many legends…war, unhappy returns, a Greek goddess and a duel enter into the picture.

Burg Lahneck, built in the 13th Century, later destroyed, then reconstructed in the 19th Century, was originally built to protect its silver mines. The site allows for views of the Rhine and Lahn Rivers, as well as neighboring castles. Apparently its views of the surrounding area made it a fortress to be reckoned with.

Listen quietly as you walk past the thick stone walls. You never know what tales you will hear. Take time to visit the towns and villages. They witnessed legends and history firsthand. Take a day, or several, for your castle-hopping trip.

Author Wendy VanHatten lives in northern California and loves to travel all over the world. She is a published author, freelance writer and editor, ghostwriter and magazine editor. Her travel advice and info can be found at www.travelsandescapes.blogspot.com.