Traveling through the back roads of Northern Ireland or dining in one of Belfast’s contemporary restaurants, you would never know that the country was once plagued by violence. The Northern Ireland of today is quite a different place to the images that filled the world’s TV screens in the 70s and 80s, when “The Troubles” were at their worst. In fact, these days, Northern Ireland is positively serene, and the fact that it is still developing as a travel destination makes it the ideal place for history buffs and adventurous types seeking an authentic view of the country. 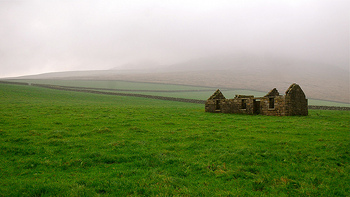 One of the four countries in the United Kingdom, Northern Ireland is often mistaken as being part of the Republic of Ireland, from which it split in 1922 during the creation of the Irish Free State. Six northern counties opted to remain part of the United Kingdom, while the rest of Ireland formed its own self-governed republic. Since then, many people in Northern Ireland have been divided on the issue of remaining part of the U.K. or reuniting with the rest of the island of Ireland. Much of this history, and indeed the history of violence in Northern Ireland, is preserved in the many political murals that decorate outdoor wall spaces across the country, especially in Belfast and the city of Londonderry (known to Irish Nationalists as Derry). 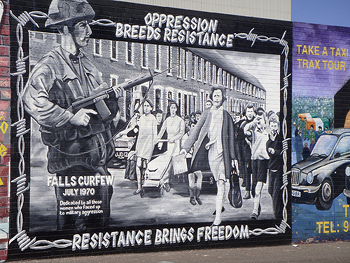 Belfast is the capital city of Northern Ireland and the second largest city on the island of Ireland, after Dublin. Though cosmopolitan and modern, with all the typical British high street shops and bustling contemporary restaurants, the historical weight of the violence that happened here still hangs over the city like an old coat. The best way to get a feel for Belfast is to take a city bus tour or a private “black taxi tour” (conducted in old, London-style taxis), which allows you to get up close with the sectarian neighborhoods where violence was once prevalent, giving you an amazing view of the close proximity in which the two different sides lived along the parallel Falls and Shankhill Roads.

But Belfast goes well beyond “war tourism,” with a number of historic sites that pre-date The Troubles, sometimes by centuries. For example, few people realize that it was in Belfast’s harbor that the ill-fated Titanic was built and is now commemorated in the Titanic’s Dock and Pumphouse, a museum dedicated to the city’s early shipbuilding trade. The city’s fine, late 19th century City Hall overlooks numerous high street stores from Donegall Square, while the grand St. Anne’s Cathedral – a re-imagined Romanesque church – is the city’s Church of Ireland (Protestant) cathedral. 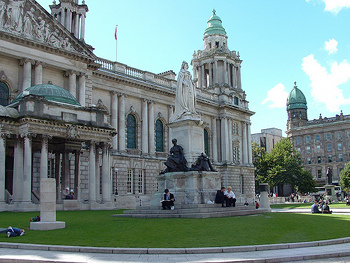 Architecture buffs should also take a stroll through the opulent grounds of Queens University in South Belfast, with its perfectly manicured lawns and well preserved Victorian buildings. Adjacent, the Botanic Gardens offer a peaceful place to spend the afternoon.

Belfast certainly holds a lot of interest for history buffs, but the countryside and coastlines are the real draws of Northern Ireland.  The rugged north coast, which butts up to the miry Straits of Moyle, is of particular interest for its many sweeping views and, of course, the mythic Giant’s Causeway, a UNESCO World Heritage Site made up of interlocking volcanic basalt columns. Legend has it that the columns were once part of a bridge built by a mythic Irish giant, Finn McCool, to cross the Straits and conquer his Scottish counterpart. 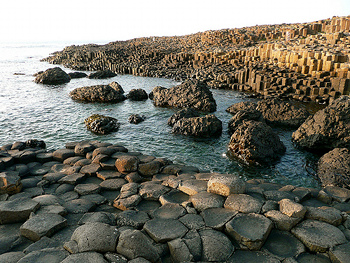 The nearby village of Bushmills is home to the Old Bushmills Distillery, which brews Bushmills Irish Whiskey in one of the oldest working distilleries in Ireland.

The southern counties of Northern Ireland also hold their share of delights. The rolling green countryside here is akin to posh southern England or Ireland, with well-groomed manor estates and quaint cottages. The village of Enniskellin in Co. Fermanagh is a quaint town situated on the banks of massive Loch Erne, which is a popular place for water sports and recreational activities. Enniskillen Castle is an incredibly well-preserved 16th century fortification that now houses the Fermanagh County Museum and a number of military history exhibitions. 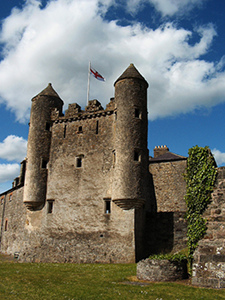 To really get away from it all, the Moune Mountains (pictured top) in Co. Down rise up from the shores of the Irish Sea into the highest peaks in Northern Ireland. Here, walking paths lead through misty vales, revealing remains of old cottages and ancient ruins.