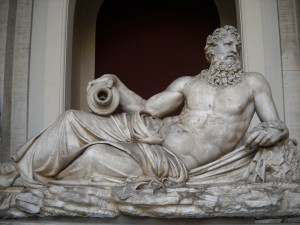 The poet Robert Browning said that “Everyone soon or late comes by round Rome.” True to Browning’s word, the Eternal City has seen its share of visitors. Whether it was the ancient empire that made Rome a household name in the four corners of the known world or the church that adopted the city as its home, a tour of Rome’s historic structures is the best way to see how each civilization that adopted Rome left its mark.

The Colosseum
Today, cities go wild when their team builds a new stadium. In the days of the Roman empire…people acted the exact same way, and then some. In 80 AD, when the Colosseum was completed after eight years of planning and construction, the emperor Titus ordered one hundred days worth of games to commemorate the space.

Except instead of watching star players take the pitch, the masses watched gladiators kill animals, fight mock wars and slay other men in the bloodsport of the ancient world.

Seating up to 50,000 souls, the Colosseum didn’t have a jumbotron, but the arena’s stadium seating gave spectators a great view of the grisly games. And just in case you thought Hollywood was hamming it up in Gladiator; yes, men did fight lions released from trapdoors in the Colosseum floor and recreate famous historical battles. The promoters of the games even filled the stadium with water more than once and staged mock sea battles.

Today, the Colosseum stands as a shadow of its former self, damaged by water, vandals and the inexorable march of time. But the interior still awes, with part of the floor cut away to reveal the underground warrens where gladiators resided before battles.

Guides can be hired at the door if you’re not traveling with a Maximus and the doors open from 8:30 in the morning to an hour before sunset. To say the Colosseum is popular is like saying that ancient gladiators had anger management issues: Ticket lines are insufferable. But you can beat the wait by purchasing a 12 euro ticket at the Roman Forum a few hundred yards away or procuring a Roma Pass, both of which will jump you to the front of the line. 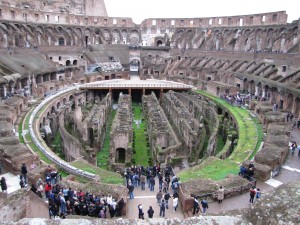 The Pantheon
The Pantheon mirrors Rome itself. Its origins are uncertain and it has been claimed by some of the most recognizable powers in history. Some allege that the circular structure, which features a spectacular dome punctured by an oculus, or a large skylight, was built to commemorate Romulus, one of the legendary founders of Rome. Others argue that Marcus Agrippa, Roman general and companion of Rome’s first emperor, Augustus, built the place to honor the Roman gods, and that it was destroyed and rebuilt several times over.

Indeed, it seems the gods might have had a hand in the matter. The iteration of the Pantheon that sits in Piazza della Rotonda today was built nearly 2,000 years ago by the emperor Hadrian and still features the world’s largest unreinforced concrete dome. After the death of the Roman empire, the Pantheon was claimed by the Catholic Church and rededicated to the Virgin Mary. It’s popularity hasn’t waned in the centuries since. The Pantheon buzzes with tourists, and for good reason: The gargantuan bronze doors, stunning architecture and beautiful interior iconography make it a top sight-seeing destination.

Even after you’ve gone inside, you can admire its facade from one of the stylish cafes in the square. Sit down, have a drink and ponder one of Rome’s best-preserved architectural wonders. Who knows, after a couple glasses of Italian wine, you may think you’ve solved the mystery of the Pantheon yourself.

The Vatican
An entire book could hardly contain all of history behind the Vatican’s opulent churches, palaces and grounds. In fact, most of its wonders derive inspiration from the most popular book ever written. At just under half a kilometer, Vatican City is the world’s smallest country. Don’t let its size fool you: Great things come in small packages. The Vatican is one of the world’s premier repositories of art and architecture, thanks to the influence of its patron, the Catholic Church.

One of the world’s oldest and most powerful institutions, the Church claims nearly a billion members across the globe, but its spiritual home has always been Rome. Hiring a private guide to take in the Vatican’s treasures is highly recommended. Each tapestry, statue and painting has an intricate story, and a guide well-versed in art history will help you appreciate the vast visual buffet on offer. Highlights include the ceiling of the Sistene Chapel, painted over four years by Michelangelo and depicting scenes from the Bible, and La Pieta, the marvelous sculpture of the Virgin Mary cradling a dead Christ, completed by the master artist when he was only 25.

No matter which sights you see in the Eternal City, make the Trevi Fountain one of them. Completed in 1762, the towering 26-meter fountain beautifully carved from marble is your return ticket. Local legend says that those who throw a coin into the fountain’s basin are destined to return to Rome. With so many stellar historical sights, one trip is hardly enough to take it all in.