Scholars, archeologists, writers and even theologians have debated, dug, and mused over the Once and Future King for centuries, but the mystery that shrouds the boundary between man and myth in our modern times remains thicker than ever.

Luckily, if you know where to look, there are places today that still bear Arthur’s name; places that – well over a thousand years later – still echo with connections to the story of a great man who might have once risen to unite the mighty fractured kingdom of the Celts against the invading brutality of the Saxons. To visit these places is to step back in time, to an England that was still towering with old growth forests, where centuries ago, there were secrets that were whispered, objects that were buried, lords who were laid to rest.

Scores of places throughout England and Scotland lay claim to the legend of the great king – from Arthur’s Seat in Edinburgh to Cadbury Castle in Somerset. To explore them all just might be the work of a lifetime – a pleasant task, no question. But if you have just a few days, here are three lovely places to start. 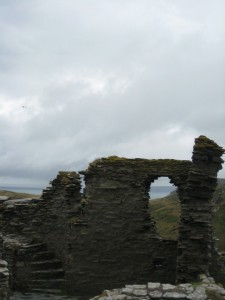 High on a rocky cliff the remains of a 13th century castle can still be seen. But this is not why thousands of people make the trek to Tintagel each year. Of course Tintagel is believed to be the place where Arthur was conceived by Uther Pendragon and Queen Igraine. But is it merely a legend? Pottery shards unearthed at Tintagel once held luxury goods like fine wines and exotic oils. Dating from the 5th and 6th centuries, these high status items were delivered from such far-off destinations as Carthadge, Greece, and Turkey. Finds such as these tell us that Tintagel during the time period Arthur was suspected to live was a center of great wealth, likely the seat of the ancient kings of Cornwall.  Far below the ruins of the castle lies another Arthurian fascination, Merlin’s Cave. Full of water at high tide and accessible only at low, it was writer Geoffrey of Monmouth who first claimed this was the place from which Merlin protected his young charge.  Time your visit right and you can soak up both the enchanted atmosphere of Tintagel and the enigmatic cave below. 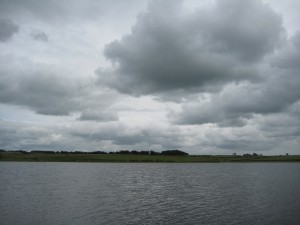 A small lay-by off the one lane road that twists through Bodmin Moor is the only indication you’ve arrived at this intriguing site. Local legend has it Arthur’s sword, Excaliber, was returned into the waiting hand of the Lady of Lake here after he was mortally wounded at the Battle of Camlan. Some believes it is here that the Lady lies sleeping, awaiting the day the King will return and his sword will be needed once again. Today the pool is cut in part by a barbed-wire cattle fence, and to get there you’ve got to be wary of planting your foot in a cow pie. But if you close your eyes, you can almost imagine the way this pool might have looked when the brave knight Bedivere stood, sword in hand; a misty place still largely hidden by towering pines or perhaps even the oaks the druids of that time. Meditate by the pool, and perhaps you may hear the haunting whisper of the Lady of the Lake. 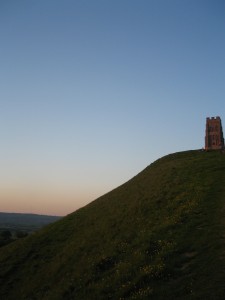 It’s a particular point of pride with Glastonites that modern day Glastonbury is the location of ancient Isle of Avalon. A mythic island said to be inhabited by Priestesses of the “Old Way.” The story goes that after Arthur was wounded in battle, he was taken to Avalon – to be healed or to be buried is a matter of contention amongst Arthurian scholars.  Avalon was described as a sacred island surrounded by water and mist, and geologists agree that long ago much of Glastonbury would be affected by tides and covered with inland lakes. The climb up Glastonbury Tor, where you can see the coast of Wales in the distance, is not to be missed. Recognized to be a “holy” hill for thousands of years, it rises almost inexplicably out of flat farmland 518 feet, the ruins of a chapel tower can be seen on top from miles away. Long believed to be a hollow hill, a place of the fairies, there are many more still who believe that this was the final resting place of Arthur – he lies there sleeping, entranced in the hill until the day comes when he will return to protect England once more. If you fancy legends of Vivienne, or Morgaine, the enchantresses from Arthur’s story, pay a visit to the Chalice Well Gardens, within walking distance from the Tor. It’s believed that the Chalice Well was home to pagan priestesses in days long past. In human memory, the water that rushes from the Chalice Well spring has never run dry, and the waters are rumored to help people heal from cancer, poor eyesight, and numerous diseases. The Chalice Well has been a place of pilgrimage for centuries. Perhaps it’s not so far fetched to believe that long, long ago, a powerful mortally wounded King would be brought there to heal.