We rev up the 600 horses in the ancient engine, which at first sputters, then coughs, then spurts to life.

I’m sitting in a 68-year-old fighter plane from World War II, an AT-6, nicknamed “The Texan” by the cocky young pilots who flew her. I’m going to do some stunts, in tandem with Dennis Van Swol, the vastly-more-experienced pilot who’s sitting in the second cockpit behind me.

As we turn onto the runway at the little airport on the edge of the Everglades, we make our final check.

“Mixture’s rich,” my headphones cackle as we converse back and forth. “Fuel-air ratio’s good. Flaps are set. Pressure looks good…”

“The Texan departing on 8 right,” I call out to other air traffic on my headphones, through a cacophony of static. I open up the throttle and we gather speed. In this old plane — shined to a brilliant yellow — the nose is so high that you can’t really see the runway when you’re taking off or landing. You have to do it by “touch.” 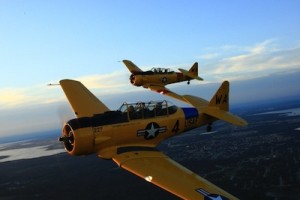 The ground falls away beneath us. The big yellow nose with the whirling propeller is guiding us up into a sea of light blue. I pull up the landing gear. (And when I say “pull,” I mean “pull!” No computers here.)

Soon we’re dancing amongst puffy white clouds, and the view is incredible.

“Let’s do a few combat maneuvers,” Dennis says, “so you can get a feel for the aircraft.” With that, he shoots into a steep climb, and then a straight-down dive. Then we’re tearing through the sky sideways, at a 180-degree angle.

We decide to do a “roll” (a sideways somersault).

All of a sudden the land and the sky are swirling around me in a blur. Clouds flash by. My head is below my body, and my hands are holding onto the balky control stick… from underneath it. We’re completely upside-down. Then we do a roll the other way, and level ourselves out.

Now it’s my turn to solo.

I hit the pedal on the wooden floor hard, forcing the nose down. The ground is flying up toward me at warp-speed. After gathering enough speed, I put the AT-6 into a steep climb. I grab the stick and pull it towards the right. And there we go… hurtling over the side at 200 miles an hour. Again my head is suddenly under the rest of my body, with clouds flying by — underneath me. It feels like the stick is going to come flying out if I yank it too hard. I ease her into normal position.

Then, I decide, it’s time for a loop (backward somersault).

Again, I turn the nose down to pick up speed. As the ground comes up to meet me, I yank it back up, pointing toward blue infinity. A climb like this is murderous on the body. But it also plays tricks with your mind. In a normal flight, it’s easy to find fixed points that can give you equilibrium — the ground, for instance. When you’re in a steep climb, however, you’re flying into a blue vacuum, with no beginning and no end.

I pull the stick toward me, and the old engine seems to whine in protest. Then I begin to flip her over, backwards. Pressure pins me back against my seat, and my head is so heavy I can’t even lift it up to see. In pilot-speak, I’m experiencing pressure of three “G’s.”

I’m totally disoriented; I’ve lost any “compass point.” I have no idea what’s “up” and what’s “down.” I can’t hold my head up. I’m having trouble keeping my eyelids open. And I’m upside-down.

“Bogies at ten o’clock!” I shout out into the headphones to Dennis.

Finally, I straighten her out and level her off. But just for a minute.

Once again I point the nose down into a dive and “floor” her, then pull back on the stick to bring her up. I struggle to keep my eyes open. Again we’re propelled like a slingshot into a giant blue vacuum. Again I roll her over into a rear somersault. And again I’m upside-down, the cockpit shaking, and my right arm straining at the stick to keep her steady.

Finally, just as it seems the skin’s about to rip off my face, I level off.

Then we do a sideways roll — 180 degrees — and, as we pass through a cloud bank, we see a rainbow.

In a few minutes, we’re descending toward the little airfield.

“North County Texan on its approach to 8 right,” I tell nearby air traffic.

I think of the man who sat in this cockpit 70 years earlier. And I shout out, “Bogies at ten o’clock!”

There are a number of air museums and restoration facilities around the country that offer rides in vintage aircraft. And there are a few that barnstorm around the country, taking their planes to you. Perhaps the best-known is the Collings Foundation (www.collingsfoundation.org), which offers flights in restored WWII bombers and trainers. Another “barnstorming” organization is History Flight (www.historyflight.com), which has an AT-6, like the one I fly, along with a B-25 bomber. An organizations called the Liberty Foundation offers rides (all over the country) in a B-17 Flying fortress bomber called “Liberty Belle” (www.libertyfoundation.org). You can also “hunt some bogies,” and actually fly the plane, at Vintage Flights in Canton, Ga. (www.vintageflights.com), and at Warbird Adventures in Kissimmee, Fla. (www.warbirdadventures.com). There’s a Minnesota company named Miss Mitchell History Rides, after the B-25 bomber it owns, that also gives rides (www.missmitchell.org). There’s a comprehensive listing of organizations that offer rides in vintage World War II aircraft at www.fleetairarmarchive.net.

aerial manuevers Collings Foundation vintage airplanes WWII bombers
Previous ArticleLost your luggage? Where to find replacements for what you need
Next Article Why A Caribbean Cruise is the Perfect Girlfriends Getaway
Steve Winston