Many travel experiences are limited to a single location: the Great Pyramids of Egypt, the Roman Coliseum, et cetera. Volcanoes, however, are a destination you can visit all over the world, in a voyage that is more psychological than anything else.

Volcanoes have held a place of deadly fascination for centuries, managing to occupy a space of destructive link between the heavenly heights and subterranean depths. Conjure up the images in your mind: frozen victims in Pompeii, Mt. St. Helens’ foggy breath or the spitting fire from the earth in Hawaii. These pictures accompany you on your travels, the first time you get to see a volcano. Because of these images, you will remember visiting a volcano for its psychological impact. Two volcanoes in Central America gave me two entirely different experiences with being up close to a natural disaster.

My own desire to see volcanoes while traveling in Costa Rica and Nicaragua originated with a morbid curiosity: How can people bear to live next to the earth’s only stationary natural disaster? Earthquakes, fires, tsunamis, tornadoes and hurricanes only appear during the event, but a volcano hovers, smiling down benevolently on those standing in its shade, until it decides to rain down some kind of arbitrary justice (or so it might seem). These thoughts rattled around my brain as my first encounter with a volcano approached. 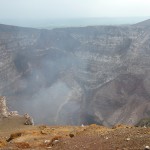 In Nicaragua, the journey to get to Masaya Volcano winds you up. This volcano is unique in that you can drive up to the rim and look over into its maw. At the entrance to the national park, strict instructions are given on how long you can stay at the edge of the volcano, and how your vehicle must be parked (facing the exit for a quick getaway). You glide into the national park, passing mile after mile of volcanic rock fields, and slowly the green dies away. Upon stepping out of your car or tour van, a cloud of sulfur stings your eyes and chokes your throat. You peer 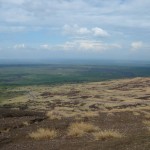 cautiously over the rim. It could be just an enormous pit in the ground, if it weren’t for the noxious, hot vapors rising up to foul the air. Climb up a steep set of stairs next to the volcano, and you gain a better vantage point into the mountain’s yawn, though the sulfur in the air makes the ascent a trial for even the fittest travelers. The viewpoint does let you see the clearly defined “no man’s land,” a no-grow area ringing the outside of volcano. After 15 minutes, your lungs and eyes can’t take any more, so you descend the stairs, coughing the whole way down. As you drive away, you wonder at the fortitude and/or idiocy of people who chose to live next to volcanoes. 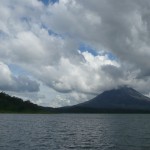 In Costa Rica, the volcano Arenal plays the part of the benevolent god watching over inhabitants scurrying about in its shadow. Or, at least, it once was, before it erupted in the 1960s and killed nearly 100 people. The gorgeous scenery surrounding the volcano dulls your apprehension, numbing your awareness that you are steadily approaching an active disaster. Arenal regularly shoots molten lava into the air, and it is for this very reason that visitors may look, but not touch (no one is allowed on the mountain). More often than not, however, Arenal’s peak is shrouded in clouds, making a benign vision. Take a boat across Lake Arenal, and watch the volcano draw steadily closer, until it looms prominently before you. A beautiful swath of 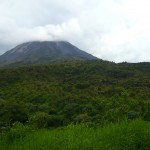 rainforest encircles Arenal’s base. A trail winds up through the rainforest, with Arenal an invisible but palpable presence behind the canopy. Finally, the rainforest falls away, and Arenal is there, just across a valley. Somehow, you are not frightened of its destructive power, nor intimidated by its size, but sheltered, triumphant in your recklessness.

Seeing volcanoes on your travels is at once terrifying and exhilarating. Central America is a convenient location to experience your first volcano, a moment you will forever remember — not only as a picture or a taste or a sound, but as a  new and bewildering emotion.

Sarah Jenkins caught the travel bug early in life, and has traveled in Asia, Europe, North America, and Africa, in addition to living in France, Austria, and Tunisia. When she's not writing, reading, or drinking tea, she can be found teaching English Language Development to middle and high school students in Denver, Colorado. With students from around the world, Sarah is lucky enough to be able to “travel” everyday.