According to the legend, brave Saint George slayed the dragon and saved the village from its wrath. The dragon’s blood spilled out onto the cold dirt, and from this blood, a rosebush magically grew. From this bush, Saint George plucked the finest blossom for the princess in an attempt to win her over (just in case slaying the dragon was not enough).

Saint George is, of course, Sant Jordi in Catalan, and the alert visitor to Barcelona has most likely seen him, with or without dragon, in many a nook and cranny throughout town. He is depicted in stone and steel on Barcelona buildings and his frightful dragon curls around street lamps and iron fences. Part of the Catalan fascination with Saint George and the dragon is that he was said to have finished off the beast just 100 kilometers away from Barcelona near Tarragona! Who knew? But according to the book Costumari Català by Joan Amades, it was there that the battle took place.

And while his clash with the dragon may not seem romantic, it has become the symbol for the most lovey-dovey day in Catalonia: Sant Jordi’s Day. Celebrated each year on the 23rd of April just as the city becomes fully enveloped in spring, Sant Jordi’s Day is the Catalan version of Valentine’s Day with a twist. While both holidays do honor the ever-sexy red rose, Sant Jordi’s Day also focuses on books and leaves out love letters and chocolate hearts. On the 22nd and 23rd, the street corners throughout the city begin to be taken over by rose sellers offering long-stem reds with perhaps a couple sprigs of wheat tied up in a gold and cherry ribbon, the Catalan flag colors.

Men are to purchase roses for the women in their life, and while mostly the rose is reserved for their love interest, flowers can also be bought for a daughter, sister or mother. These are not huge bouquets but simple single roses. You can always tell who is popular by how many roses she’s got by the end of the day on the 23rd. While I love getting flowers, I have to say that I think the Sant Jordi’s Day is a bit unfair. While women get buds, men get books, which women buy for them along Las Ramblas, Passeig de Gracia or in the city’s many bookshops. On the 23rd, many writers have stands and do signings along Passeig de Gracia, so some really dedicated sweethearts might even give a book with an inscription in it.

While I have always given a book, I’ve never bought it on the 23rd. The crowds are fierce in the center of the city on Sant Jordi’s Day and it can be hard to read the back cover description with all the commotion going on. I usually buy a book at Laie the day before and have it wrapped there, and then enjoy a Sant Jordi’s Day stroll without the stress of trying to make a purchase. However, some friends like going with their partner to look at the books, let him choose the title, and then buy it on the spot. It depends how you roll, and how you deal with crowds.

And there will be crowds! Lots of lovers pour into the city, especially in the afternoon to amble Las Ramblas and Passieg de Gracia after lunch or on their way to an evening coffee or cocktail. This makes for fabulous people-watching and the amorous atmosphere is contagious. While some couples end the night with dinner for two over cava and candles, this is not the main tradition. The rose, the book, and a walk arm-in-arm through town are the three essential ingredients for a successful Sant Jordi’s Day.

1. Many bookstores will have special presentations on for Sant Jordi’s Day. Look up the schedules ahead of time to see local authors speak (usually in Catalan or Spanish).

2. Laie is one of my preferred bookshops downtown to buy at for the big day: www.laie.es/pauclaris

4. For those interested in a reenactment of Sant Jordi slaying the dragon and rescuing the princess, check out Setmana Medieval de la Llegenda de Sant Jordi in Montblanc: www.setmanamedieval.org 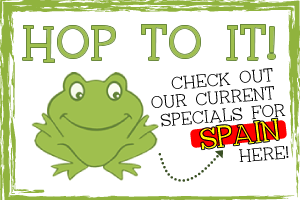