Get Fresh at the Farmer’s Market

Shopping at the largest producers-only farmers’ market in the United States can be no picnic if you don’t keep in mind the one rule of etiquette that locals practice religiously.

Before learning this golden rule, I had started blazing a trail in the opposite direction, carelessly colliding with other shoppers loaded down with sacks of beets, onions, new potatoes and all the other fresh goodies that Madison residents fill their pantries with for the coming week.

With about 170 stalls forming a circle around the grounds of the impressive State Capitol Building in the city’s pretty downtown, this farmers’ market can draw upward of 20,000 shoppers. They’re all spending their Saturday mornings eyeballing what’s going to be featured on their upcoming family menu. Walking against that many bag-carrying, wagon-pulling folks hellbent on seeking freshness and bargains, you quickly find out the inappropriateness of going against directional tradition.

Now aware of the golden rule, I could switch direction and get into step with everyone else to enjoy an experience that Madisonites have taken to heart since 1972, when the market began operation.

It was a pretty simple affair back then — just five farmers set up their wares. However, the following season, dozens more farmers were arriving early to try and get the best spots around Capitol Square. The following year, organizers were scrambling to issue season passes for vendors in an effort to organize the rapidly growing market scene. The only rule then, and one still enforced today, is that products must all be Wisconsin grown and the person behind the table must produce the product on the table. 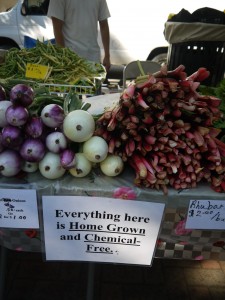 These days, the market has grown to become the largest producers-only farmers’ market in the United States. If it’s a sunny Saturday morning in Madison, most residents will be making an early start on the Dane County Farmers’ Market.

Johnson lives live about 20 miles south of Madison, but that doesn’t stop him arriving on site by 4:15 every Saturday morning. Some vendors are unpacking their goods before 5 a.m. and some customers are already waiting on stalls to open by 6 a.m., says Johnson.  Local chefs often begin their shopping around 8 a.m. before the crowds start building, he adds.

By mid-morning, the perimeter of the State Capitol Building’s grounds in downtown Madison is a vibrant razzmatazz of commerce, where shoppers and vendors banter good-naturedly as cash and goods are exchanged in the old-fashioned way.

Johnson says that people drive for miles to check out local the farmers’ produce on display and to check out local seasonal specialties, such as fresh vegetables, fruits, meats and cheeses, baked goods, specialty goods and fresh-cut flowers.

Vendors’ stalls reflect the seasons. April and May sees the first crops of asparagus, rhubarb and spinach emerge. Through the summer, celery, cherries, cucumbers and melons appear, while during fall and into November stalls start filling with apples, grapes, okra, potatoes and plums.

Throughout the year, meat products, including more exotic varieties such as venison, elk and rabbit are regularly featured, as are favourites like flavoured cheeses, goat cheese, world-class aged cheeses and the Wisconsin delicacy, fresh cheese curds. If the curds don’t squeak when you chew them, they’re not fresh, the locals say.

“Madison is a very food-conscious community and it is very supportive of farmers’ markets for their home tables and at their favorite restaurants. In this area, ‘local’ trumps ‘organic’ foods,” he laughs.

Purchasing locally grown and seasonal foods can benefit the economy, environment and personal nutrition in many ways and it is important to be conscious of the source of your food, he says. 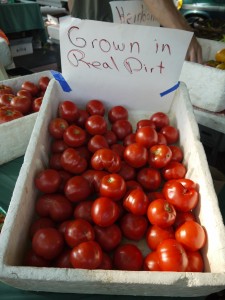 But the market means more than just making good food choices. In the nine years he has managed the market, Johnson has observed that, for some vendors, Saturday morning is a time to enjoy the appreciation of their products and build a one-on-one relationships with their customers. The mission of Dane County Farmers’ Market is primarily to unite the urban and the rural cultures, and it seems to be working, Johnson says.

On my wanderings around the market, I discovered that the market is a great place to people-watch. Buy yourself a chilled fresh cider,  take a perch on the immaculate lawns of the Capitol and gaze on the shoppers eyeballing mouth-watering produce that, just a few hours earlier, was still in the field. There’s a noisy backdrop to the scene as the event attracts street musicians who play across the four streets around the square, while adding to the festivities and sense of community life, flag- and pamphlet-waving proponents of widely varying political and social causes try to seek out converts.

It is also a favourite venue for parades, rallies, local special events and family gatherings. Obviously, it is a place where friends meet friends in Madison.

The market’s location on Capitol Square is also excellent jumping-off spot for visitors interested in sampling some historical flavours. Just off the square, you’ll find a very different atmosphere and set of experiences, with three of the city’s museums within a few minutes stroll from the market stalls (www.visitmadison.com).

Saturday Markets run from April to early November. Hours on Saturdays are from 6 a.m. to 2 p.m. There is also a Wednesday Farmer’s Market, and a farmers’ market that runs through winter months. Visit www.dcfm.org to find out more information.

Coming from the North, exit Interstate 90/94 on to Hwy 151 which becomes E. Washington Ave. in Madison.

Coming from the South, exit Hwy 12/18 on to Park St. going north to W. Washington Ave. which leads to downtown.

Biking
Many dedicated paths and bike-friendly routes into downtown Madison make it easy to get to the Farmers’ Market. Ample free bike parking is available around the Capitol Square.

There are a number of downtown hotels conveniently close to Capitol Square. I stayed at the Madison Concourse Hotel (www.concoursehotel.com). If you stay here, consider upgrading to the Hotel’s Governor’s Club, where privileges include access to the business lounge, which offers excellent views of Capitol Square, and free hors d’œuvres and drinks are available.

Dane County Farmer's Market Madison Wisconsin
Previous ArticleCruise or All-Inclusive: Which is Right for You?
Next Article Have a Fall Festival Fling in Ghent
Peter Wilson

Travel writer Peter Wilson produces a wide range of stories covering both international and domestic destinations. A member of the Society of American Travel Writers, Wilson has a passion for sharing his discoveries with readers though his stories and pictures.