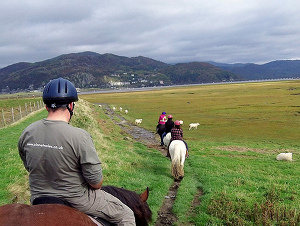 Wales is a place that’s impossible to dislike. Tucked away on the west side of Britain, Wales marches to the beat of its own drum — one packed with Celtic lore, friendly faces and a unique identity all its own. The people of Wales — wry, welcoming and incessantly warm — are perhaps the country’s strongest selling point. But behind these warmhearted souls is a land full of charm, history and culinary delights. Animal lovers will find plenty to do amid the vast, wild landscapes here and there are even a few odd spots for those looking for something slightly off the beaten path.

If you’re planning a trip to Wales, here are five completely unmissable activities to try.

There are 641 castles in Wales, making it the most densely castled country in the world. The first castles were built in Wales at the hand of William the Conqueror during the Norman conquest of Wales in the 11th century. You can, however, find examples of just about any type of castle in existence somewhere in Wales, and many of the country’s castles, such as the impending UNESCO World Heritage Site, Harlech Castle (pictured left) in Gwynedd, North Wales, were built during Edward I’s conquest in the 1200s.

For a great view, make the climb to the top of looming Carreg Cennen, built upon a limestone crag and boasting a mysterious tunnel under the mountain.

Sometimes referred to as the “town that never was,” Portmeirion is one of the most strangely beautiful places in Wales. Built by Sir Clough Williams-Ellis, this faux Tuscan village sits on a hillside overlooking perhaps the most beautiful estuary in the country along the River Dwyryd in North Wales. Sir Williams-Ellis was a quirky architect obsessed with perspective and tricks of the eye who also had a healthy love for saving old or dilapidated buildings, statues and elements, many of which he incorporated rather flawlessly (if a little oddly) into the eerie landscape of Portmeirion. Though no one’s ever lived there, the faux town has functioned as a film set, most notably starring as “The Village” in the British 1960s TV series The Prisioner. Several cottages and a four-star hotel allow visitors to stay overnight here or you can simply visit the odd town for the day.

Just off the coast of New Quay in West Wales, Cardigan Bay is one of the best places in the UK to spot Bottlenose Dolphins. Home to around 200 dolphins, this is one of the largest and most accessible dolphin colonies in the whole of Britain. A number of boat companies run dolphin-spotting excursions from the quaint New Quay dock.

Among them, SeaMôr is a very eco-friendly company that offers excursions on its scientific research boat, the Islander, including the chance to hear the dolphins’ incredible sonar communication system via a hydrophone, as well as great views of the sea cliffs along the coast here. And, if you’re truly lucky, the crew might just cruise your boat into a cool sea cave.

Horseback riding is a popular pastime in Wales and, with such incredible countryside to explore, it’s no wonder. The vistas you’ll take in on any Welsh riding excursion are without equal, from the soft sandy beaches with cool lapping waves of West Wales to the serene forests of the Brecon Beacons and the soaring mountains of Snowdonia National Park. Riding trips can range from a quick couple of hours along a sweet beach to multiple-day, self-guided treks across the country, so there is something for every level, whether you’re an expert rider or just getting started.

Bwlchgwyn Farm, for example, offers several trek packages for a variety of different riding levels. The rides are led by experienced horsewomen and traverse the incredible flats along the stunning Mawddach Estuary in North Wales, offering the chance to take your pony out onto the beach when the tide is low.

From freshly caught oysters to single malt whisky, there is something delicious around every corner in Wales. It is a nation virtually obsessed with artesanal, locally sourced foods, to the point that nearly everything you eat at most Welsh hotels and restaurants is grown within seven miles of your plate. Be gone the days of “stodgy British cuisine” — Wales has some of the best beef and lamb in the world, outstanding seafood, gorgeous cask ales, seasonal handpicked vegetables and some of the best cheeses you’ll ever taste. So get eating!

Whether you’re looking for a nice time outdoors or in, Wales is the type of place that leaves you wanting more of its lush green mountains, beautiful coastlines, smiling people and delicious flavors.