First time at a Waldorf. Expectations: High. I admit it. My girlfriend—a 5-star hotel connoisseur, same as me—has stayed there two other times, and she’s been raving about it. It’s nearly a 5-hour drive from Miami, so when we pull up, we are expecting to be in front of the beachside pool in about ten minutes. Instead, we wait in a valet line for fifteen. OK, I get it. It’s Friday evening, around 6pm, and it’s the height of summer. Everyone just drove hours to get here. Finally, we are able to leave the car with the valet and take our weekend bags to check in at the front desk. Where we wait. About fifteen minutes, because there’s only one clerk. Well, there were two, but when one got done with the folks in front of us, he took off, too. So we wait. First world problems, and… it’s the Waldorf. There’s a salad named after them. A staff person passes by. My girlfriend, who is in the customer service business in a big way—as are so many of us, especially in the travel business—stops him, pointing out the wait. He shrugs. Someone will be along in a minute. Expectations: lowered to a medium. I look around. Lovely view, great pool, great grounds overlooking the beach.

Hey, 2-for-1 margaritas at the little bar, and some mint and lime flavored water to drink. Correction, an empty water cooler with a bunch of mint at the bottom. My friend sees it, too, so when she finally gets up to the check-in, she mentions it to the clerk. He shrugs, nods and goes back to checking us in.

Afterwards, we walk around the pool and take the elevator up to the suite. A suite! At the Waldorf Astoria! Expectations: high again.

Except it’s a just halfway-decent room, with a dark back bedroom and okay furniture and the tiniest balcony I’ve seen except on a ship. My friend looks around, shaking her head. Her other two visits were apparently stellar, so she has something to compare this with, but even to me, I’m wondering what the big fuss is about a Waldorf. I’ve had a much better experience at a Holiday Inn. She wants to go back to the front desk and ask for a different room. I agree. 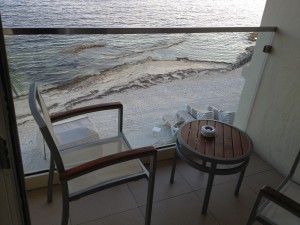 Downstairs, I go to the little bar while she talks to the manager. I get the feeling I could use a two-for-one margarita right about now, but no one is behind the bar. I sit there for about ten minutes, reading the New York Times and taking deep breaths. Everything is so inconsequential; what’s happened? Each problem is so small, but they are starting to stack up. My friend comes over. We’re going to go look at a regular room now, which is all they have. She wants to know why I didn’t get anything to drink, so now I have to mention that no one has come back to the bar the whole time, further exasperating her.

On the way up to the room, she tells me about “non-negotiables.” In her industry, there are things that aren’t okay, no matter what. Bad customer service is one of those things. The fact that this hotel has this reputation, that we’ve been here for over an hour and we’ve seen all these little things go wrong, is made that much more irritating because it’s a WALDORF ASTORIA. In my head, my whole traveling life, Astoria meant “storied;” as in, my aunt got married at the one in New York about fifty years ago, this was the best hotel chain in the world and I could expect 5-star service from them with a price to match.

The regular room is fine. It’s decent. At least there’s nice light coming in. But the balcony is more than twice the size of the one in the suite. And the manager has already said the one in the suite is the same size as this one. It’s disheartening. This isn’t a life or death situation, this is a hotel room. I mean, who cares? But it costs more than twice any other hotel in Key West to stay here — because they trade on their “storied” reputation — and we both are feeling ripped off, pissed off, and like we don’t want to stay here five more minutes.

Back at the front desk, I now meet the manager, Drew. He can see he has two unhappy customers standing in front of him and he barely manages to say he’s sorry. In fact, he’s so laid back, it’s like I’m talking to the hotel golf pro. While nothing can disturb his placid demeanor, it doesn’t feel like he’s in charge or that he cares. “We’re down to the last few rooms,” he says, “I’ve got nothing else.” Well, that much is obvious. He finally makes a single concession, offering to comp our breakfast. It feels grudging and late and I ask if we check out NOW, will he refund our money. He looks surprised, but agrees to do so immediately.

We spend a few minutes in the room making arrangements to stay at Ocean Key (a delightful contrast I will address in a later post), and my girlfriend is still on the phone, her arms full of her luggage, as we get to the elevator doors. She motions that I should go in the elevator and she’ll take the stairs so she doesn’t lose her call. I’ve held it together well up until this point — I mean, how many things can go wrong on a road trip? How many ways can we make it harder or worse for the people we choose to travel through our lives with? Now, wheeling my little overnight bag, I congratulate myself as I step onto the elevator and the doors close. Expectations: none.

Or, rather… the doors almost close. At the last possible second, they open again, to reveal a sloppily dressed waiter with a full cart of empty water jugs, someone’s leftover lunch plates and—there’s another damn empty water cooler. I know there will barely be room on the elevator for that cart and me, but I have also had enough. “No!” I yell to him, punching the CLOSE button on the elevator. “You’ll just have to wait!” 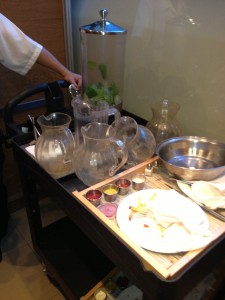 The doors slide open again. “It won’t take any longer,” he tells me, ignoring me and pushing the cart and himself past me on the elevator. I step aside, actually cursing under my breath, something I never ever do to a staff person anywhere because I know how rude people can be to folks in the service industry, but this was just the final ridiculous walnut on my first—and last—Waldorf salad. As I handed the keys back to the manager, I complained about the waiter’s rudeness, but Drew didn’t react. We had our refund, and he no longer had to put up with two unhappy guests. I guess that made it a win-win.

Everywhere else, all weekend, people went out of their way to be kind and helpful and sweet. Strangers opening doors, a staff person at the Ocean Key (did I mention what a great hotel it was?) walking us to the elevator in case we needed help finding it, a taxicab driver taking me to a wonderful bakery that he said only the locals knew about.

Everything was telling me – and now I’m telling you – stay anywhere but the Waldorf Casa Marina the next time you’re in Key West, and you’ll be sure to have a better time.