Shrimping on the Lady Jane 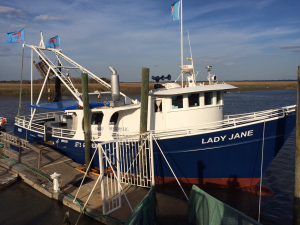 If you have been on any dolphin watching cruises, you know they can be pretty boring at times. If you are lucky, you see a few dolphins or sometimes just their backs as they come up for air, and if you are unlucky, you spend a lot of time just watching the water waiting for dolphins to appear.

A shrimping excursion with the Lady Jane is absolutely nothing like those experiences but, instead, is one of the most interesting cruises you can take with kids if you are in the area.

We were visiting the beautiful King and Prince Beach and Golf Resort on charming St. Simons Island, Georgia and decided to take one of the shrimping excursions for an afternoon outing. My expectations were pretty low and assumed we would be bored on this two hour adventure, but I was completely wrong.

We headed over to Brunswick, where the Lady Jane is docked just a few minutes away from the resort. The Lady Jane is a Coast Guard-certified passenger steel shrimping vessel which was used for years in the fishing industry. With an air conditioned cabin, restroom, and a large, covered deck with plenty of room to walk around, it’s a comfortable ship to cruise on and provides a great family experience. The cruise takes place on the calm waters of St. Simon Sound, so you don’t have to worry about getting seasick on this adventure.

We boarded, along with a couple of other families with kids, and settled down as we cruised away from the dock. I worried about those kids, thinking they were probably going to be bored on this two hour cruise.

Again, I was totally wrong.

The boat had a large white table with sides set up. I wondered about that and about the net hanging out the back – were they going to catch something? My question was soon answered when one of the crew, who revealed himself to be a biologist and explained that they would be catching a variety of things from the Sound and showing them to us.

I was immediately intrigued, as was everyone else.

Once we got underway, the biologist showed us the net and explained how it worked. He then sent the net overboard and let it troll behind the boat for a while.

After a few minutes, he brought the net back onboard. The birds in the area were pros at this and knew exactly what would happen next. They hung out on the boat, followed behind in the water, and flew around, all waiting patiently for the tidbits that might fall out of that net.

He brought up the net and swung it over the table, then proceeded to untie it. Out of the net poured dozens of fish, crabs, stingrays, jellyfish – it was amazing!

He had a mishap with one of the local blue crabs which was astonishingly hostile and leaped, quite literally, 12 inches in the air to latch onto one of his fingers. He was amazingly calm as the damn thing drew blood, merely asking for help from a crew member to get it detached. He went on talking with a paper towel wrapped around his finger to staunch the blood. Remind me to give crabs a wide berth on the beach!

I didn’t realize horseshoe crabs were in the area, but these neanderthal-looking creatures are all around, apparently. Stingrays are also in the water although they are not dangerous, and, of course, the most common and popular creature found in this area is the shrimp. All came up in the net and were shared.

They actually lowered and raised the net full of interesting creatures a total of three times and each time different creatures appeared. They have even caught small sharks in the net in the past, although we didn’t see any on this trip.

Every single minute of the trip was interesting and the kids onboard were completely entertained the whole time – but so were the adults! It’s a perfect family outing and I absolutely recommend it if you are in the area. Check the cruise schedule here; tickets are available at $39.95 for adults and $35.00 for kids under 6. The experience is well worth it.

For twenty years, I worked as a librarian in an elementary school but finally decided to get serious about travel writing and devote all my time to it. Now, I travel the world and write all about it. I can't imagine a more fabulous or fulfilling job. I write a regular travel column for two regional, Central Kentucky magazines and contribute regularly to other magazines and online travel sites, such as The SavvyGal, A Luxury Travel Blog and The Vacation Gals. I'm an avid reader and stay active with Yoga, Pilates and Zumba classes. My favorite place in the whole world is a beach - any beach. I have been married for 34 years and my husband is my favorite travel companion. I also rely on him for his excellent photography skills. We have two grown children and the best grandson in the world. Slowly but surely, we are visiting all the places we have dreamed about. Hopefully, the next one will be the one you want to read about!