The minute I step onto the red soil of Prince Edward Island, I relax. I can't help it – the environment demands it. It must be the sea water. No matter where you are on the island, the ebb and flow of tide creates a meditative Zen-like atmosphere that slows your mind, body and soul.

I'm here with several other literature lovers, including one from Japan interested in a certain red-headed heroine. We are here to explore PEI's most celebrated export: L.M. Montgomery's writing.

The year 2008 marked the 100th anniversary of the publishing of Montgomery's landmark first novel, Anne of Green Gables. The novel is about a freckled orphan who put PEI on the world map. The island loves its Anne, and PEI is already polishing Anne artifacts for the celebratory year. This is where our tour begins.

We wake up at the Hillhurst Inn in Charlotte, the province's capital. Sure, the Delta Prince Edward Hotel is the biggest in the city, but on an island dotted with Captain's Homes, historic properties like this one are the way to go. The Hillhurst Inn was built by a wealthy shipbuilder and merchant in 1897. Fortunately, this building stayed a private residence for decades, eventually becoming the home of the university president. The lavishly oak-trimmed property serves as a relaxing hub for our daily adventures.

First stop is Cavendish. This is the area locals refer to as touristy, and it just happens to be a mecca for Anne of Green Gables fans. There's no shortage of Montgomery-related museums and sites, from her birthplace to her grave. The Anne of Green Gable's author was born in PEI in 1874 and raised in Cavendish by her maternal grandparents after her mother's death, 21 months after her birth. She moved to Ontario after marrying at the age of 36 but was returned when she died in 1942. She's buried in a simple grave in her home town. We stop briefly to pay our respects before moving onto the Disney of Cavendish.

The Avonlea Village is a white-washed interactive experience that attempts to take us back to 1908 through song and set. It's all a little contrived, though families seem to love to spend the afternoon among costumed characters and replica trains. However, literary purists (like our group), prefer to wander through the trails and hills of the Prince Edward Island Green Gables National Park nearby. 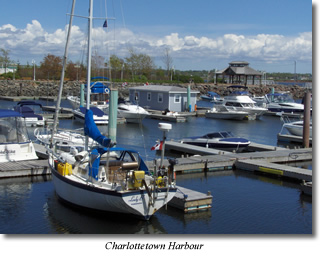 We are only a handful of the thousands of people who will flood through the gates of this provincial park each summer. Some are here to enjoy the surrounding nature, but most are here to see the original Green Gables farm house, once owned by Montgomery's relatives and apparently the inspiration for the novel. The site was acquired by Parks Canada in 1937, so it's well-preserved and stocked with knowledgeable historic interpreters, one from my Alma Mata, Guelph University. She studied literature at U of G, and that's not surprising considering the English department's Professor Mary Rubio is the country's authority on L.M.'s extensive personal journal collection. An added bonus of the day: rather than don an Anne costume and take photos (which you can do at different places on the island) we opt to stroll through the "haunted forest" near Green Gables that inspired Anne's imaginative nature.

The day ends at the Anne of Green Gables Museum at Park Corner. This farm has Montgomery credibility – the house is owned and lived in by George Campbell and his sister who are great-grandchildren of Lucy Maude. They opened this site, where Montgomery was married by the Lake of the Shining Waters, as a museum in 1972. An added bonus is the horse-drawn carriage rides around the lake. George, also known as Mathew Cuthbert, spins a few tales about near-miss marriage proposals that occurred while jostling visitors around the property.

Of course, not everyone loves L.M. Montgomery's books and that certainly doesn't mean Prince Edward Island is off limits. Just the opposite – it is possible to inhale the salt air and get sand between your toes without ever having to sing for ice cream. 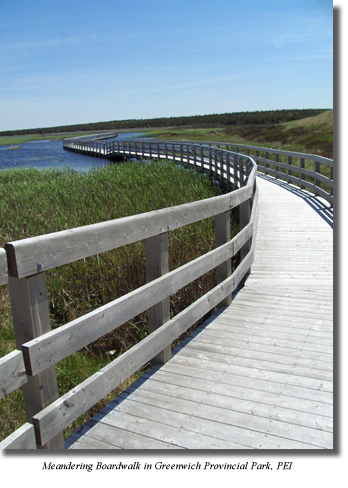 This island is a haven for outdoorsy types. For instance, thanks to the Confederation Trail, people can now bike from one end of the island to another (or run or walk, if you have that kind of stamina). When the PEI railway was abandoned in 1989, the island jumped on an opportunity to turn the rails into trails. The tip to tip route totals 170 miles, so you'll have to fuel up. Writers, however, spend most of their time sitting, so my group sticks to the fuelling part.

Collectively we decide: if you only visit PEI once, don't miss a traditional church basement lobster supper. Some restaurants do imitations, but it's better to go authentic and head to Saint Ann's Church on Route 224 on any day but Sunday. For a set price, we get mussels, chowder, lobster, potato salad, homemade pie, ice cream and tea – with a side of locale color and congeniality. This meal beats city cuisine any day.

The grand finale of our visit harkens back to how it began: a meditative walk along the shores of Greenwich Park beach (off Route 313), one of the most peaceful places on the planet. To get the beach, though, we must walk along a floating boardwalk that meanders through the sensitive wetlands. Frogs jump as we step past; red-winged black birds quietly protect nesting sites. Centuries of wind currents have swept the sand grains into meringue-like peaks, and the gulf of the St. Lawrence is a shell's throw away. At this moment I realize how liberating the maritime landscape must have been for an imaginative turn-of-the-century storyteller who lived with a vision of a misfit orphan girl.