Costa Rica is a land teeming with the paradoxes of its geographical location, bridging North and South America and the Pacific and Atlantic Oceans. The resulting climate makes it ideal for year-round travel. The forces of nature are at their spectacular best here, churning out rainforest and volcanoes, great beaches and vistas. The animals and plants of the region are of two great continents. The diversity of flora and fauna, of geography and terrain all come together here in a mere 50,895 square kilometers. The elevation of much of the country’s landmass offsets the tropical setting of its location only 8 degrees north of the equator. Like Hawaii in the Pacific, Costa Rica hosts 10 of the 13 recognized climatic zones as well as local microclimates. 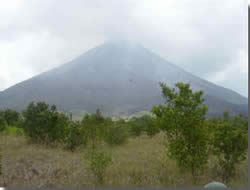 The equatorial position of the country means that throughout the year there is a fairly constant twelve hours of light between sunrise and sunset from 6:00 am each day to 6:00 pm. The county’s location also maintains a fairly constant temperature, never varying more than a few degrees on a seasonal basis. If you are traveling from the Northern Hemisphere, you are used to giving due consideration to terms like “summer” and “winter”. However, in Costa Rica, the seasons revolve around a dry season, December through April and a wet season May through November. Costa Rica promotes their “wet season” as the “Green Season.” This is not just clever marketing. The year-round nature of Costa Rica’s travel opportunities has made it the Caribbean destination with the highest tourism growth. The Green Season is an excellent time to travel to Costa Rica. This is when the warm, wet climate brings the plant life into full bloom, and the country’s verdant flora explodes with the vibrant life characteristic of Costa Rica. As we will discuss below, the green season means more wildlife, better visibility and rates that are easier on the pocketbook!

December, January, and February tend to be cooler as winds from the north lower temperatures. In the coastal regions, the average temperature at sea level is 82

degrees Fahrenheit on the eastern Caribbean side of the country and 89 degrees on the Pacific side. As you climb in elevation, temperatures begin to drop approximately one degree for every 100 yards. Thus, in the mountains, jackets, sweaters and coats in the highest elevations are definitely in order. Temperatures at night tend to be warmer in the wet season

Costa Rica’s mountain ranges, situated between two oceanic climatic and moisture zones mean that rainfall is a part of Costa Rica’s ecology. Annual rainfall averages approximately 100 inches in the plains and 150 inches in the mountains occurring in the early afternoons in the highest elevations and late afternoon or night in the plains. While mornings during the wet season are often bright and sunny, by afternoon the rains typically fall.

There are real benefits to traveling to Costa Rica during the Green Season. Perhaps the best reason is the 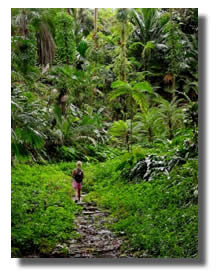 abundance of wildlife. The greener foliage and plant life offer a wider range of feeding grounds for the animals. Likewise, because the green season in general means fewer tourists, the animals are more relaxed in their habitat. If one of your reasons for visiting Costa Rica includes paddling sports and time on its rivers, the green season means banks that are consistently filled with fast moving water. The mountains tend to be more clearly visible as the rains carry the fog and haze away making volcano viewing particularly enjoyable.

The Green Season also means fewer travelers in the hotels, shops and dining establishments. As a result, general prices for accommodations and practically every aspect of tourism are less than in peak travel season. Packages in Green Season can be as much as 30% less than in peak, and the local population and shop keepers have more time to spend with travelers on an individual basis.

As a bridge between North and South America, Costa Rica’s biodiversity is astonishing. Monkeys, sloths, tapirs and wildcats as well as an unrivaled collection of bird species numbering more than 800 make their home in the rainforest. With more than 25% of the country in national parks, there is great opportunity to leave the beaten path and to see the wide variety of plant and animal life year round.

The Costa Rican rainforests are vast, but accessible. The road infrastructure tends to be unpredictable outside of the major cities, and caution when driving is highly advisable, especially during rain storms. Many roads are unpaved and bridges are often single-vehicle width. The best advice in any weather is to plan ahead, take your time and enjoy the scenery.

Any experienced visitor to Costa Rica will tell you that there is no end to the amazing array of things to do. Costa Rica is a nature lover’s paradise. Better yet, ecotourism is a way of life in Costa Rica. The country plays host to a wide variety of adventure sports and favorites of travelers include mountain biking, river rafting and scuba diving. Hikes through the rainforests include trips to active volcanoes, boat trips on rivers snaking through the rain forests and opportunities to ride a zip line through the forest canopy. You can watch live lava flows on Arenal Volcano, bird watch (some of the best and most diverse in the world), stand on mountaintops where both the Atlantic and the Pacific are visible, watch the marine turtles at Tortuguero or any one of a hundred other terrific outdoor opportunities.

This year, any time this year, give some consideration to placing Costa Rica on your list of “places to visit.” You will be glad you did.