If there is one city that is on every traveler’s bucket list, it is probably Paris. The Eiffel Tower, romance, the Seine, Notre Dame… how can you resist the charms of the City of Lights? I certainly can’t and I know lots of other people can’t either, and that is exactly the problem with Paris. Its greatest draws directly result in its greatest downfalls: crowds, rude waitstaff, picture-snapping tourists and overpriced food.

To find the unspoiled corners of Paris is the holy grail of travel. It’s like searching for a deserted beach in the Caribbean: it just doesn’t exist anymore. Or does it?

The fact remains that millions of people live in Paris everyday like locals, and there’s no reason why you can’t experience some of that when visiting. In fact, with a little research and a dash of whimsy, it’s entirely possible to make a whole vacation in Paris feel just like you live there, and that’s exactly what I did on a recent trip. 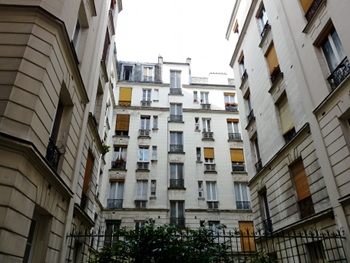 The first trick to making your stay in Paris feel authentic is to stay somewhere authentic. Don’t get me wrong, there is nothing wrong with a nice hotel. But if you really want to see Paris like the locals do, you have to live where they do.

If you’re thinking an apartment is out of your price range, you could be wrong. A charming 1-bedroom apartment in Montmartre can go for around $100/night on sites like Airbnb. And there are few things more quintessentially Parisian than waking up, casting open the French doors of your sweet apartment and stepping out onto a tiny wrought iron balcony overlooking a garden courtyard. 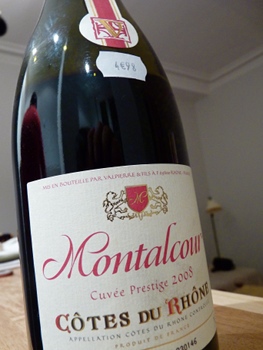 The simple small shop sounds so much sexier in French: épicerie. A staple for local Parisians, this is the corner store where you can get everything from milk to cheese to perfectly ripened fruit and, of course, wine. Compared with a large supermarket or a restaurant, the épicerie is so cheap that you won’t mind stepping over dusty boxes and battling for space with tipsy shelves to get what you need.

Most neighborhoods have at least one épicerie, if not several. There was one right around the corner from my Montmartre apartment, and the fact that I had an apartment with a fridge in the first place meant I could take home spoilables like cheese and fruit. This makes for a great, authentic French breakfast. Plus, the best Côtes du Rhône you’ve ever tasted shouldn’t cost more than €3-4 in a place like this. 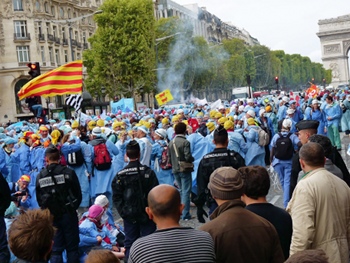 The French in general and Parisians in particular are well known for their protests. On any given day in the City of Lights, it is quite possible you’ll run into a strike of some sort. This is especially true if you visit in September or October, one of the main “strike seasons” in France. I happened into two protests by pure accident on my last trip.

Though checking out a planned protest might not seem like a very touristy thing to do, it is certainly a major aspect of life in Paris. Most French strikes are peaceful protests with a crowd protesting some government action or another (usually budget cuts) with picket signs. You can take care not to get caught up in any dangerous skirmishes by staying on the outskirts of the strike and not lingering too long. 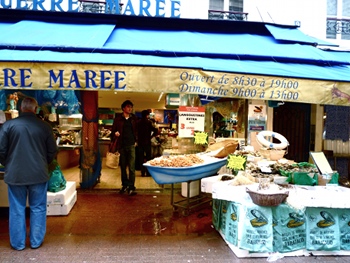 Ah, the French farmer’s market. I could die happy shopping in these colorful dens of fresh produce, surrounded by the clanging of vegetable crates and the swirling aromas of fresh baking bread. Parisians shy away from conventional supermarkets in favor of their farmer’s markets. There are dozens of fresh markets open throughout the week and it is typical for a Parisian to buy their fresh produce, bread, fish and meat at different stalls in the market.

While some farmer’s markets in Paris are typical park markets with temporary tents, others are permanent markets located along small streets or alleyways. Here, resident shops line up side-by-side, their striped awnings swaying in the breeze and their fresh goods calling to you from perfectly manicured window displays. This is the perfect place to pick up a picnic of bread, cheese and wine. Be sure to bring along a basket or bag. 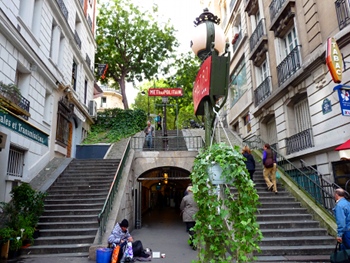 Paris is absolutely massive. There is only one way to truly get away from the touristy sights like a local: the metro. The Paris metro is old, dingy, loud, rattly and absolutely oozing with charm. If you are lucky, you will have occasion to ride one of the lines where the train cars roll on rubber tires.

The stations themselves are often works of art, with detailed tiling, art nouveau decorative elements and quirky themes that reflect the locale of the surrounds. For example, the Louvre-Rivoli station is kitted out with replicas of famous sculptures and art housed in the Louvre. Meanwhile, the walls of the Bastille station are adorned with tiled images of the famous storming of the Bastille during the French Revolution. 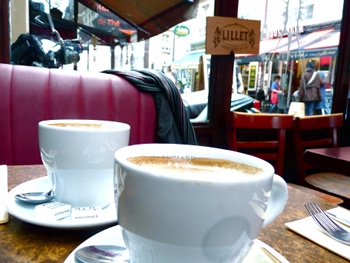 I can think of no more Parisian a way to start your day than with a croissant and a strong coffee at a local sidewalk cafe. It’s true that not all Parisians start everyday like this, but lingering over a coffee, talking politics, reading the newspaper and generally soaking up the amazing city ambiance is simply a way of life in Paris.

Perhaps the best place in the city to find those iconic, charming sidewalk cafes is in Montmartre, a hilltop district famous for its winding streets leading up to the Sacré-Coeur cathedral. However, almost every Parisian neighborhood has at least one place to get a coffee and a fresh croissant, and discovering yours will be a grand adventure.