Maybe it’s the fact that I’m from the western United States. Or maybe it’s because of growing up in a throw-way generation of disposable everything and pre-fab houses, but here in Spain, and in Europe in general, I am impressed by what is ancient and still relevant. 1,000-year old buildings are no biggy for Europeans, but in my eyes they are wonders. How can they still be standing? And as is the case with many of the Cistercian monasteries; how can anyone still be living in these enormous, cold, stone relics? 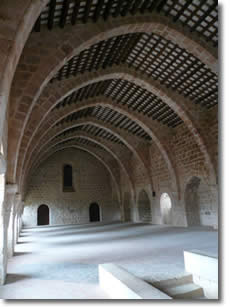 There are Cistercian monasteries all over Europe, with the majority of them concentrated in France, Spain and Italy (though originally they were present in the U.K., Cyprus, Syria and Germany, too). Known as the ‘White Monks’ the nuns and brothers who follow the Cistercian way of life wear a white apron and live in solitude and austerity. In today’s world of Internet, and obsessive communication, the White Monks are radicals, reminding me of the Amish I met on a trip to Iowa or the Quakers of Costa Rica. In fact, the three groups share many of the same basic values of hard work, a simple life living off the land, and disconnecting themselves from modern society with all its vices and temptations.

However, the Cistercians differ from the Amish in that they are men or women of the cloth. The group formed in 1075 in Cistels, a village south of Dijon, France, and dedicated themselves to the strict observance of the rules and teachings of Saint Benedict. They had a slow start and some set backs as any breakaway group does, and in the first 50 years of the Cistercian monasteries it appeared that the White Monks’ way of life would not survive. In 1111, just as all seemed lost Stephen Harding became a head abbot and turned things around, pushing Cistercian monasteries into a time of wide and rapid expansion. When Harding died in 1133, there were 70 monasteries in operation thanks to his determination.

As the Cistercian lifestyle grew in popularity monasteries were constructed in Spain. Currently, there are 11 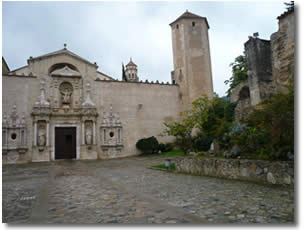 monasteries throughout the Iberian Peninsula open to visitors, some alive and functioning with White Monks, and others abandoned acting as nothing more than tourist sites. Three of the choicest of these monasteries make up the Ruta del Cister, in the Penendès region of Catalonia. Of these three, two are working, one run by nuns (Vallbona) and the other by brothers (Poblet). These working Cistercian monasteries give visitors a look at the past and present lifestyle of a dwindling group – unfortunately, White Monk recruit numbers are down. The monasteries are so close together that they can be visited by car over a weekend, or for the more adventurous pilgrim, hiked to over a couple days.

A foot trail connects the Ruta del Cisters, joining Poblet, Santes Creus, and Vallbona in a triangular holy trinity of monasteries. The path crosses wine country and farmland, most of which would have belonged to these giant monasteries in the past. The Cistercian code demanded hard manual labor from its monks and nuns, and because of their remote locations, most had to depend on their crops to survive. It is no mistake that most Cistercian monasteries are found near rock quarries and rivers; these were two key ingredients to Cistercian expansion and agricultural success. As the monasteries grew in the 13th century, the White Monks produced wine and other foods and sold these goods for a profit. This is certainly not the case anymore. Besides the pottery that one brother makes at the Poblet monastery, the White Monks aren’t producing anything these days.

Hikers on the La Ruta del Cister will find it well marked but should not expect to camp. The trail mostly cuts through private farms, villages and vineyards, so pitching a tent would be frowned upon. However, there are hotels and facilities for Cistercian ‘pilgrims’ in towns surrounding the monasteries. Another option is staying in a rural house, like a B&B in an ancient masia. Walking the Cistercian trail is the best way to develop an idea of what life would have been like in the 12th century, tracing the White Monks’ footprints. 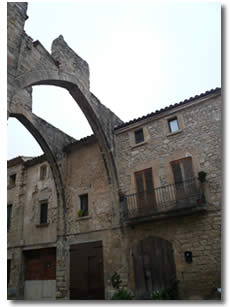 Whether going by car or on foot, it’s a good idea to keep the monasteries’ opening and touring hours in mind as they are sporadic. It’s possible to start off at any of the monasteries, but when I did the route I began with Santes Creus. This is the only monastery on La Ruta del Cister which does not have a religious community living in it, which means visitors can explore every part of the church and building. I took a tour here with a small group and Eva Rodon was our tell-all guide, who informed us that the abbey was constructed in 1150 and that the White Monks were made to leave for good in 1835.

Call me twisted, but a highlight for me was seeing the Santes Creus ‘punishment’ cell, which is accessed through a miniature wooden door behind many thick stone walls. It was here that sinning monks would (mostly) voluntarily lock themselves for weeks at a time. Today’s cell is actually what used to be two tiny cells, and it is too easy to imagine White Monks locked away there in the almost darkness and cold damp. One of the most haunting aspects of the cell was the graffiti left on the wall from some bored/inspired monk. It’s hard to make it out at first, but then it’s quite clear that there is a pencil drawing of Jesus and quite a bit of writing on the upper part of the wall. Now that’s what I call history!

After Santes Creus and lunch, I made my way over to Poblet where visiting groups get swift tours at controlled hours. Poblet was also founded in 1150 and its monks were also made to leave in 1835. However, unlike Santes Creus, Poblet’s monks returned and set up shop again in 1940. It was at the Poblet monastery that got my first glimpse of a real White Monk. The abbey has 32 monks living under its enormous roof and is surrounded by grapevines. In the 14th century Poblet was producing and selling wine, and a large portion of the monastery is actually an old cellar which can be toured. Back then, the White Monks grew, produced and yes, even drank the wine they made. Nowadays the vines belong to the large wine producer Torres, which has set up a small shop outside the monastery.

When I noticed our guide, Rosa Albes, whispering to a White Monk, I asked her if they still kept a vow of silence. “The rules have changed to fit the times,” she said, “They can talk to each other; it’s no problem.” This information gave me an unexpected feeling of incredible relief. I was also happy to see Poblet’s extensive library. Of course, monks have always had a strong connection to the written word, and it seems that at Poblet this tradition is continuing. The monastery’s library is stocked to the brim with 8,000 books and journals plus Internet and central heating. Rosa encouraged me to stick around until 6pm for the monk’s nightly Gregorian chant practice which I am sure would have been magnificent.

From Poblet it’s on to Vallbona (1176) where nuns have run the show for 800 years. Except in times of war, the Vallbona convent has always been in operation. In the Middle Ages, it was common for Catalan nobility to put their daughters in Vallbona, as it was considered prestigious. Vallbona is smaller than the other two Cistercian monasteries on the route and happens to have an olive cooperative right next to it, a nice spot to pick up a couple bottles of Extra Virgin. Though in need of some repairs, Vallbona is beautiful and it’s no shocker to find out that it was deemed a historical-artist monument in 1931.

Whether hiked or driven, the Ruta del Cister is a great pick for a weekend getaway. While I’d like to recommend the healthy choice and say hike it, I also think having a car in this area comes in handy, especially during the colder months of the year. By car you will be able to tour not only the monasteries but the many vineyards around Penendès which are braided into La Ruta del Cister. My humble recommendation: do a two-for-one and alternate your visits between admiring the architecture of the Cistercian abbeys, and savoring the robust fruits of Torres Vineyards by the glass.