What’s not to love about Athens? Travelers who remember Athens from visits in the 1980’s and 90’s will say the city is a bit pricy and  crowded. They will remember five million inhabitants spilling through its streets, filling the shops and by-ways with an audible hum,  the traffic fierce. But Athens holds a certain attraction felt nowhere else, and if you have not been there in the past few years, you are in for a wonderful surprise. The 2004 Olympics bestowed a new lease on the old city’s life, and Athens has made a quick about-face, at once ancient, yet excitingly new again. 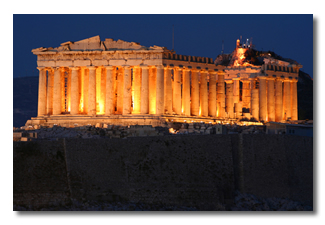 From dozens of vantage points in the city the Acropolis sits magnificently poised, a visible reminder of the thousands of years of history that underlies everything here. Walking the streets of Athens, spending time in its sidewalk cafes and rooftop terraces is a wonderful treat, one that should be high on the list of every true traveler. The city’s coastline has undergone a renaissance and is much livelier than in years past.  The renovated hotels, museums and galleries are still fresh from their Olympic make-over. New boutique hotels now compete with the classic ones that have offered accommodations for the past 60 years to thousands of travelers from Europe and North America. The food? Greek cuisine has never been better.

Many of the ancient sites are now linked together by a promenade meandering through classical Athens making the city amazingly pedestrian friendly, a surprise to those who visited here in the past century. The effect is to create an open museum throughout the city that can be strolled by the traveler at a pace befitting the ancient sites. Athens is now more than ever a 24 hour drama amongst the ruins.

Start inside the Syntagma metro station and take the short walk to the House of the Greek parliament. Walk through the heart of the city to the Plaka, the old center of Athens. A short walk up the spectacular Dionyssiou Areopagitou pedestrian walkway takes you to the Acropolis. Athens is home to the Panathenaic Stadium, where the first Modern Olympic Games were held in 1896, a wonderful contrast to the renovations that accompanied the 2004 games a century later. Indeed a walk around the famous old neighborhoods reveals exactly how comfortably the differing eras of this city coexist. The small Plaka shops sit next to fancy department stores, next to traditional taverns.

The Acropolis, the Odeion of Herodes Atticus, Olymbion, Roman Market, Panathinaiko Stadium or Kallimarmaro remain almost too inspiring and awesome for words. These are the sites you have wanted to see since childhood, and they seem to live here larger and more real than you might have imagined. These are not dead monuments, but living reminders of the brilliant seat of western civilization that Athens has been.

The Acropolis hill, the so called the “Sacred Rock” of Athens, remains the most important site of the city and its most visible given its site high above practically every other point in the city. Few monuments are so immediately recognizable. The Acropolis Museum, houses some of the most important sculptures taken from the site during the centuries of excavation and reconstruction. The Greek people still hope for the return of the Parthenon Marbles taken from the site and scattered through the centuries to come to rest in other museums around the world.

The economic chaos of the past couple of years has truly made Athens, and Greece as a whole, a real bargain.  Strikes and other civil unrest are typically announced well in advance, and are localized and easily avoided.  Now is a good time to see Greece close up for those travelers who follow a contrarian pattern in their wanderings.

Whether it’s your first trip or a return visit, there has never been a better time to travel to Athens and to see the other cities and islands of Greece. The prices are right, the crowds are noticeably smaller than in years past, and the people, accommodations and food better than ever.