I suspect that if you looked up the phrase “finding paradise” in the dictionary, one of the definitions you’d be given would read like this: 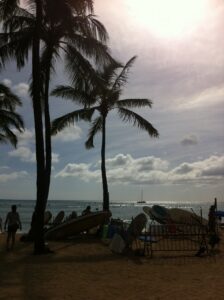 The Hawaiian islands are legendary. The image of arcing palm trees casting shade over a fuzzy-haired surfer as he waits for the tide to come in, has become so iconic in American culture that seeing it will make you feel like you’ve landed in a postcard.

The story written on the back of this picturesque postcard begins about 1500 years ago when the first Polynesians arrived on Hawaii’s Big Island. It was, however, only in 1898 that Hawaii became associated with America, as a territory of the United States. In 1959, it became America’s 50th state.

Oahu is the third largest of the six Hawaiian islands (Kauai, Maui, Molokai, Lanai and Hawaii make up the rest of the state). You’re likely to know it for the city of Honolulu, the lush beaches of Waikiki, the military memorials of Pearl Harbor, and the legendary surfing of the North Shore. Waikiki is fairly saturated with tourists, but there’s a fair sprinkling of locals along the beaches too, so this makes for a good base while you’re on Oahu.

As per the aforementioned postcard, easy-going island style might be the first thing you associate Hawaii with, but oddly enough, one of its largest industries is the military. You’ll see this soon after you arrive in Honolulu and catch a glimpse of multiple air force and naval bases on your short trip in from the airport. Pearl Harbor is the most famous of these and is open to the public year-round. 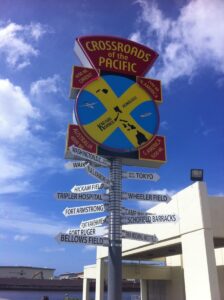 On 7 December, 1941, Japan launched a surprise wave of bombings on the American Pacific fleet that was stationed at Pearl Harbor and in air force bases around Oahu. In just one morning, this attack killed over 2000 men and brought the United States into World War Two. Today, you can tour any (or all) of the separate monuments that are in the harbor – the USS Arizona (the actual ship is still sitting in the water below the monument and it’s incredibly poignant to see), the USS Bowfin, the USS Utah and the USS Missouri (where the war was officially ended as Japan signed their peace treaty with the US). It is unfathomable to wrap your mind around smoking battleships and metal carnage in a place that is now so beautiful and peaceful.

A lot of Pearl Harbor tours will include a guided trip through downtown Honolulu on the way back to your hotel, so you can take in some of the city too. Polynesian Adventure Tours gave me a particularly entertaining one.

After you return to Waikiki, lighten the sombre mood of your day by exploring the aquatic side of Hawaii. If you’re up for a walk on the complete wild side, and are qualified for it, you’ll be able to go diving to ogle a plethora of marine life – turtles, eels and dolphins abound, certain sharks and whales will too, if you’re lucky. And if you’re not up for quite such an adventure, many tours go snorkeling amongst smaller, regular-sized fish, or just on dolphin- and whale-watching cruises. I can vouch that snorkeling in the open sea is enough of a rush for someone who’s used to keeping two feet on dry land.

Whether you choose to get under the water or not, a vital slice of Hawaiian culture that any spry person can experience is surfing. The ancient Polynesians were the first ones observed what was said to be ‘floating on long wooden planks on top of the waves.’ What you’ll see today is a mixture of tourists, locals, kids, parents, rookies and pros balancing atop boards from five to 12 feet long. Beginners should not fear the sport – surf schools offer comprehensive lessons that start out on land and let you progress through the waves at your own rate. Hans Hedemann Surf School is right on Waikiki beach and their two hour group lessons are entirely enjoyable and affordable. 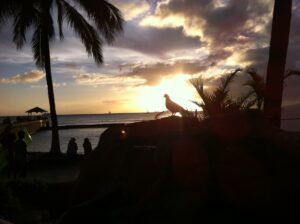 But be warned – the moment you feel the rush of surfing your first wave, you’ll be hooked. All your corporate dreams will go out the window and you’ll only want to spend your time finding your next surfing rush. I’m just letting you know in advance.

Another warning you should heed is that many locals will tell you stories about how they came to Hawaii on holiday eight years ago… and are still there. Once you’ve found paradise, it becomes incredibly hard to leave it again!

Monica Davies studied Journalism in Pretoria, South Africa. Here, she realized she didn't care about reporting the news, and decided to embark on a lifelong search for awesomeness. She's lived in London, New York and Pretoria and is currently on a tour around the world, hoping it'll finally put some of her wanderlust to rest. Read more about her travels at www.athousandguitars.com or follow her on Twitter @thousandguitars.