The Funkiest Graveyards in America

Often, when I travel, one of the first places I seek out is the local cemetery, and not just during Halloween season. Why? Because there, believe it or not, you can learn a lot about the place you’re visiting — about its people, about its history, about its lifestyle, and about its colorful characters and legends. You can be moved to tears, of course. But you may also find yourself laughing out loud, at the poetic or funky or outrageous or angry or funny remembrances etched into tombstones.

Don’t believe me? Well, ponder this. For anyone who’s ever been there (and for us Floridians who go there regularly), Key West is the epitome of “funky.” In fact, I think it’s just about the funkiest town in America (or, as the independent-minded locals like to say, “in the Conch Republic of the Keys.”) Separated from the mainland by 160 miles of keys (little coral islands) and water, Key West is, literally, the last stop. (And it’s closer to Cuba than to Miami.). It’s always attracted folks who like moving to the beat of a different drum: the wild, the weird, the artistic (and would-be artistic), the bikers, the treasure-hunters, the rum-runners, the speculators, the wacky (and wacked-out), the wanderers, et cetera.

Small wonder, then, that a number of visitors (not only me!) eventually find their way to the Key West Cemetery. Here, they find a “city” of some 70,000 inhabitants — twice as much as the living population above ground.

And here, they’ll find gravestone inscriptions such as the one etched by a woman scorned on the grave of her scoundrel — “At l 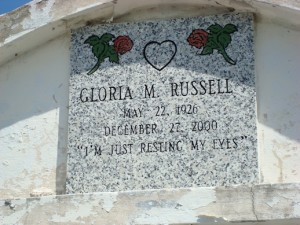 east I know where he’s sleeping tonight.” Here, they’ll find the grave of B.P. “Pearl” Roberts, apparently the town’s resident hypochondriac, upon which is inscribed, “I told you I was sick!” They’ll also find the grave of “General” Abe Sawyer, a 40-inch-tall little person who demanded that he be buried in a full-sized grave. Then there’s the eternal resting place of “Sloppy Joe” Russell, who owned the legendary Key West bar that’s today named for him, which was Ernest Hemingway’s favorite haunt when he lived here in the ’30s. Also buried here is Hemingway’s chief source of material for To Have and Have Not, a Prohibition-era bootlegger named Willard Antonio Gomez. And the inscription on the grave of Gloria Russell simply says, “I’m just resting my eyes.”

My other favorite American cemetery is the one at Boot Hill, in Tombstone, Ariz., site of the Gunfight at OK Corral. Here, most of the markers are plain wooden crosses, or wood planks, rather than concrete or marble. And many of them are hilarious. For example: “Here Lies Lester Moore / Took six shots from a .44 / No Les, / No more.”

And it’s hard not to feel badly for this poor soul who felt the sting of frontier justice: “He was right / We was wrong. / But we strung him up, / And now he’s gone.”

Or this Tombstone original: “Here lies Butch. / We planted him raw, / He was quick on the trigger, / But slow on the draw.”

Tombstone’s not the only town in the Old West with some great gravesites, though. Try these on for size: In Colorado, “Bill Blake. Was hanged by mistake.”

Silver City, Nev.: “Toothless Nell. Killed 1876 in a dance hall brawl. Her last words: ‘Circumstances led me to this end.’ ”

And, lastly, in Dodge City, Kans.: “Here lies Arkansas Jim. We made the mistake. But the joke’s on him.”

In fact, there are interesting cemeteries — and individual graves — all over America.

Ruidoso, N.M.: “Here lies Johnny Yeast. Pardon me for not getting up.”

Girard, Penn., the grave of Ellen Shannon: “Who was fatally burned March 21, 1870, by the explosion of a lamp filled with R.E. Danforth’s non-explosive burning fluid.”

Atlanta, Ga., on the grave of an adulterous husband: “Gone, but not forgiven.”

Shortly after I finish writing this blog, I’m going to Colorado. One of the places I’m going to explore is the old town of Cripple Creek, where the West, apparently, was very, very wild. And when I get there, one of the first places I’m heading for is the old cemetery, in which there’s an 1880s grave with this inscription: “Here lies a man named Zeke. Second fastest draw in Cripple Creek.”