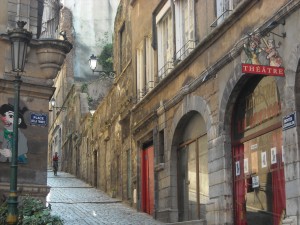 Upon arriving in Lyon, France’s third largest city and textile capital, it took me all of twenty minutes to figure out how French women maintain their slim figures.

They walk, everywhere. And in a city like Lyon, where the topography rivals that of San Francisco, there’s nothing even remotely simple about a “simple stroll” through the boutiques of the Cote de Grande.

Fortunately, the city boasts a surprising number of alternatives—nine to be exact—thus proving that in Lyon, getting there really is half the fun.

The Big Three: For starters, locals enjoy all the standard modes of mass transit including an extensive bus, tram and metro system. Visitors can purchase a 1, 2 or 3-day Lyon City Card for unlimited access to all mass transit, in addition to free or discounted admission to numerous museums and cultural attractions. Tickets can also be purchased a la carte, but the automated ticketing machines utilize a scroll bar at the base of the screen as opposed to your standard, ATM-like buttons. 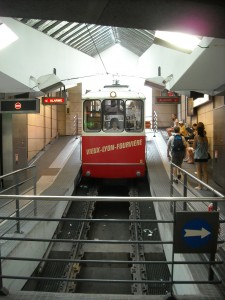 Funiculars: Central Lyon is nestled between two rivers, the Saône and the Rhône, and its founders (first the Celts and then the Romans) were more concerned with defense than accessibility. Thankfully, there are two funiculars that run west from Vieux Lyon, the city’s charming renaissance-era district, up the bank of the Saône. The funiculaire are a bit of a joke amongst locals—they’re “quaint” in the slow and antiquated sense of the word— but the shorter of the two offers a great view from Fourvière and easy access to both the impressive Notre Dame de Fourvière and the Musee de la Civilisation Gallo-Romaine.

Rope Swings: For those craving a bit more adventure the aptly-named France Aventures offers both children and adults to the chance to “dance with the trees” through a variety of outdoor activities and ropes courses.

River Cruises: Back in the heart of the city, river cruises provide an unparalleled view of the city’s two-thousand year history, including four of the districts that earned Lyon it’s UNESCO World Heritage designation in 1998: Fourvière, Vieux Lyon, Croix Rousse and Presqu’ile. Alternatively, landlubbers can grab a drink in one of the many floating bars moored along the banks of Rhône.

Traboules: To the northeast, Lyon’s pristine Cite International and Parc de la Tête d’Or belie the city’s revolutionary past but the traboules of Vieux Lyon tell a different story. Since the silk worker’s revolt in 1831, these mysterious tunnels have housed generations of revolutionaries, including the heroes of the French Resistance. 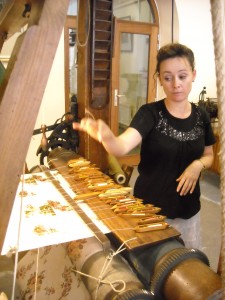 For a quick orientation, stop by the Maison de Canuts, which includes Lyon’s silk museum and a collection of looms. If you’re lucky, you’ll land yourself an English-speaking tour guide who will demonstrate several centuries-old weaving techniques, including that which was used to furnish the palace of Versailles.

The traboules were originally built to allow easy access to the Saône and to provide silk workers with a means of transporting their goods. Many are open to the public and as such I decided to seek out the legendary tunnels on my own, forgetting the reason they played such an important role in the various revolutions of the 19th century: they’re hidden.

Visitors interested in actually finding said tunnels are advised to book one of the many guided walking tours, which are available for as little at €5.

Cyclo-pousse: With its numerous museums, archaeological ruins and historic districts, it may come as a surprise that Lyon is every bit as focused on the future—at least in terms of transportation—as it is on the past.

To this end, the city recently launched a fleet of cyclo-pousse, or tricycles; but these are no ordinary, man-powered trikes. Instead, they’re electric and driven by “cyclonauts” who transport paying customers between Place Carnot and Croix-Rousse. 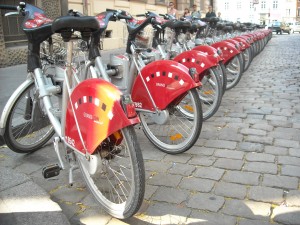 Velo’V: Last but not lease is the Velo’V. Put simply, the Velo’V is a bicycle—nothing fancy there—but it’s a bicycle owned by the city of Lyon and available for pick up 24/7 from one of 340 strategically placed “bike stations.” If you’re like me (inept at bike maintenance, lacking in storage space and averse to biking up hill), the Velo’V is the way to go. You simply choose a station (preferably somewhere at the top of the Croix Rousse hill), swipe a card and take your pick from the fleet of shiny, red, bicycles. Rentals for less than 30 minutes are free of charge and once you’ve had your fill of cycling, you simply return your bike to any of the 340 stations scattered throughout the city.

The system isn’t perfect—you have to have a “chip card” or a French credit card in order to take out a bike, so most Americans are out of luck— but the Velo’V is quickly gaining popularity throughout Europe and it’s easy to see why.

So go ahead and take your pick: with all the options Lyon has to offer, the journey is every bit as important as the destination.