Valparaiso, for want of a better word, is a shanty town on the coast of Chile. Starting from its docks, sitting in that all too commonly found water, colored grayish brown by the offal of container ships, it extends up scattered hills away from the sea. The city grows up with them; it’s a bit all over the place – disjointed and beautiful. It makes up a sort of patchwork cloth of a city, with at least one of those patches buzzing with a vibrant and sometimes dangerous energy. It’s also host to one of the continent’s biggest New Year’s celebrations, with much of the continent making the trek to see the renowned firework display and enjoy the party. My time there was hampered by stress, uncertainty and disorganization. Avoid my problems by adhering to the following:

DO: Find a Bed Early:

It’s a big party, and so a lot of people make the pilgrimage. A LOT: we’re talking over the million mark in a city with a population of 30,000. Not all of these folk are staying the night (a lot travel from nearby Santiago just for the evening), but there’s enough to ensure that you can spend roughly four days calling up hotels, hostels and random people in the phone book only to be told that there is nothing available, or that you can sleep in a bath filled with motor oil and a Nigerian family, and it will only cost $250 a minute.

DON’T: Use the Buses

As mentioned, the most commonly chosen option is to travel from Santiago for the night – it is only an hour away, and the accommodation options are aplenty and far more affordable. With regards to transport however, the ‘book early to avoid disappointment’ ethos is again best followed. But let’s be honest, it’s also unrealistic. You can arrive at the bus station incredibly early on New Year’s Eve morning and hope your patience is steelier than the other thousands waiting – but for comfort sake, don’t use the bus. They are efficient and clean, but there are other options. Rental cars are available – but prepare to search for a good deal. Otherwise, there are bountiful taxis, all reasonably priced, especially if you find others to share it with you.

DO: Make it to the Beach for the Fireworks

They begin at midnight (funnily enough), last for around forty minutes, and are seriously impressive. There are other places to view them, such as the hills above Valparaiso town, but the beach of Vin del Mar, a little further around the bay, is a far more comfortable affair. It may be because it is the ‘family spot’, but remember, the party goes on all night, and it is worth pacing yourself. The amicable nature of those around you – the families – also makes for a nice easing atmosphere. During my time there I met a man dressed almost entirely in tinsel, and was then accosted by many families asking for pictures with me. I can only assume it is because they thought I was either Van Gogh or Ron Weasley.

DON’T: Take a Lot With You

This could also read as “don’t go if you don’t like crowds” – they are a lot of them. Like I said, over a million people cram into a city meant for 30,000, so it’s best you prepare to get warm and cozy up against some strangers. In its own way it’s enjoyable (not in that way), but there is the very real danger that someone could reach into your pocket without you realizing. It’s far easier to do without the stress and just leave everything you don’t need at the hotel. That said; do make sure you take a jacket…

It’s summer, and during the day it’s not cold. But remember that the celebrations are when the sun is down, and last longer than a night’s sleep. Also, as it is on the coast, there’s a cold breeze that continuously rages in. There are ways to keep yourself warm: dancing continuously and drinking excessively, yet few are as efficient as the age old one of taking warm clothing. My choice of attire was largely ineffectual, and proved to be a terrible blanket when I decided to attempt sleep in the back of our rental pickup truck. Yes, I slept in a pickup truck, which leads me on to… 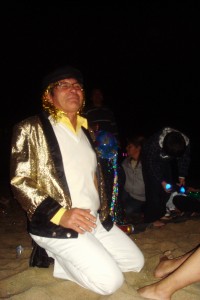 DON’T: Plan Anything for the Next Day

Valparaiso is probably one of the best New Year’s experiences I’ve had. Despite the hassles of getting there and dealing with the crowds, the energy, people and party are incredible. On each street corner is someone playing music and people dancing, as well as hundreds of street salesmen selling food and drink, and everyone is friendly. It’s near impossible to not be swept up by it, which is exactly what happened to me. I was swept up, made friends in broken Spanish, danced in the street (it wasn’t pretty: picture a horse trying to ice skate), and then, as I had nowhere to stay and no way of finding one, I slept in a pickup. I say slept; I lay there while passersby laughed at me until the sun had enough warmth in it for me to sit on the beach. The next day was a write off, but in terms of ways to start a year, it’s hard to beat.