I’m sorry for calling you uninformed, and I thank you for showing an interest in my home country of South Africa. Unfortunately, you tend to get some facts about the country a little bit wrong. So, before you ask me one of these questions for the umpteenth time, I thought I’d tell you a bit about what’s really behind the most common assumptions everyone makes about South Africa.

“How come you’re white if you’re from Africa?”
I burst out laughing the first time I got asked this, before I realized it was an honest question. The population breakdown is roughly 10 percent white people to 90 percent non-whites (black, Indian and colored people). We’re obviously tipped toward the African side of the scale, but we’re a multicultural society just like almost every other country in the world these days.

“Where in Africa is South Africa?”
Say the question slowly back to yourself. Think about it. Yes, you’ve answered it already. South Africa is the southern (bottom-most) tip of Africa. It is a country itself and not a general area. We surround the countries of Lesotho and Swaziland. Namibia, Botswana, Mozambique and Zimbabwe are directly above us.
This does not automatically mean that there is a country called North Africa though — that is actually just a general area.

“Apartheid was like slavery, right?”
No.
In a very broad, sweeping sense, it was fueled by the same racial discrimination and incorrect belief in white supremacy, but they were not the same thing. Apartheid (literally meaning “separateness” in the Afrikaans language) was a policy instituted by the national government of South Africa from 1948 until 1994. It was complete racial segregation in all aspects of life and was often upheld using force.
But white people in South Africa did not ever own/buy/sell non-white people and, while we are still dealing with the after-effects of Apartheid, it has officially been over for almost 20 years.

“Am I going to get car-jacked/mugged/shot [insert violent crime of choice] if I go to South Africa?”
It’s unlikely. If you do, you are either not being a smart traveler, or you’re incredibly unlucky. There are thieves in every country in the world — if you keep your head about you you will be likely to avoid all of ours. Don’t stay in bad areas, don’t wander alone at night: It’s every reprimand your parents told you when you were younger anyway. Just do some investigation about the place(s) you’d like to stay and the best way to get around in that area. I promise the country is not going to attack you the moment you arrive.
I’ve lived in South Africa for most of my life and have never been directly affected by violent crime. (Knock on wood.) The first time I had anything stolen was when I moved to London. Oh, the irony. 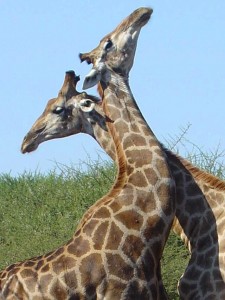 And my personal favorite:
“Are there a lot of lions/giraffes/rhinos/[insert wild animal of choice] everywhere?”
I thought this was a general joke about Africa until I started doing some serious traveling and got asked it more than once. There is abundant wildlife that is unique to our land, and a great sight to see… in proper game parks and nature reserves — not in my backyard. South Africa is largely populated by regular cities and suburbs that you might find anywhere in the world — it looks very normal. If you travel to specially designated areas, like the Kruger National Park or the Pilansberg Game Reserve, you can sleep in a chalet, and take daily drives in a robust 4×4 that, if you’re lucky, will show you all these lions/giraffes/rhinos you keep asking about in their natural habitat — it’s a highly recommended experience.

Other gems include:
“What shanty town do you live in?” – It’s not a shanty town, buddy, it’s a regular suburb. My house has foundations, and rooms, and a garage and all. There are shanty towns, but anyone you meet who is traveling internationally probably does not come from one.
“Is it like summer all year round?” – We’re not in a desert somewhere along the equator. We get winter, we get a lot of rain, we’ve even started getting regular snowfall in some parts of the country. So do not bring your swimsuit if you come in winter.
“I was quite surprised to see an airport when we landed.” – Well, where did you think they were going to land your plane, dude?

I hope this has helped to clear things up a bit for you, and if you’d like to know more about life at the bottom of the dark continent, you can ask me anything, or go over to www.southafrica.co.za to do some reading.

One thought on “Behind South Africa’s Stereotypes: An Open Letter”